Home » Blog » How I Did It: Michael Marks Award Special – Omikemi Natacha Bryan on ‘Salt’

Ahead of the Awards ceremony on Thursday 12th December, The Poetry School has asked the five poets shortlisted for this year’s Michael Marks Award for Poetry Pamphlets to discuss the writing process behind a poem from their award-nominated work. So far, Theophilus Kwek, Charlotte Wetton, and Phoebe Stuckes have talked about their poems; today, Omikemi Natacha Bryan shares the inspiration behind ‘Salt’.

The ingestion of salt has been prohibited within some branches of African Jamaican religious and spiritual traditions as it is believed to be linked to the loss of spiritual force.

This idea has since been incorporated into Jamaican vernacular; ‘im salt’ is often used in reference to someone experiencing “a streak of bad luck or misfortune”.[1]

I wrote the first draft of Salt in one sitting, at the time I had just begun reading Barry Chevannes’, Rastafari: Roots and Ideology.[2]

I became absorbed by the storytelling of a figure named ‘Sister Dixon’ who provided Chevannes with accounts related to the development of the Rastafari movement.

Her testimonies had palpable visual richness and were reminiscent of classic folk tales and myth: it was hard to tell where reality ended and the imagination began. You could be sure her testimony would leave you feeling haunted.

Dixon’s vignettes also reminded me of stories told by my grandparents; they had the same phrasing, vernacular, logic and, most significantly, a way of telling without telling; speaking while disowning or distancing from what is being spoken through giving the responsibility of the story over to an external force.

This is commonly witnessed in phrases such as, ‘mi did dream see’ or ‘the spirit did move me to’. These dissociative devices arise for many reasons and have many uses, one is to allow the speaker to elude the consequence of speaking one’s truth or what seems to be unbelievable.

I was sure I wanted Salt to draw on the speech patterns, phrasing and evasive language found in the storytelling tradition of those such as ‘Sister Dixon’ and my grandparents. I also sensed the speaker in the poem was trying to find a way to tell and survive the telling.

The next stage involved cutting up and collaging the first draft. The intention was to interrupt and create new direction for the narrative. The process helped to clip threads, refine the subject of the poem and point me towards the form. The prose poem seemed like a natural choice due to the strong sense of narrative and compression. I also decided to omit the text and images I felt took the poem too much in the direction of magical realism.

I wanted the reader/listener to have little doubt about the events that were being witnessed.

After this, I experimented with grafting a few simple phrases and descriptions from one of Sister Dixon’s vignettes, such as: ‘hand on mi head’, ‘seven keys’, ‘little child’, ‘come to preach’, ‘im lip red’. I used collage to embed these into the second draft and re-imagined them in the context of the scene that was developing. Here the phrase hand on mi head becomes:

…that’s when I noticed Dixon, running his hand up her leg

…lip hung like his and was red with his warning

The process took two weeks with a few days letting the poem sit in between. I took what I hoped was the final draft to my mentor at the time, Vishvantara Julia Lewis, and she recommended a few minor edits. After a week of tweaking I was done; the title came as an afterthought.

In retrospect the most significant influence on the development of Salt was an unconscious attempt to process my own dissociated traumatic memories. The poem was a device that allowed me to replay, revisit and adapt real traumatic events in search for some coherence or resolution. 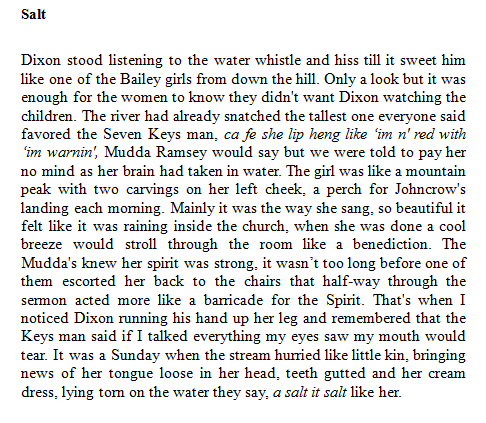 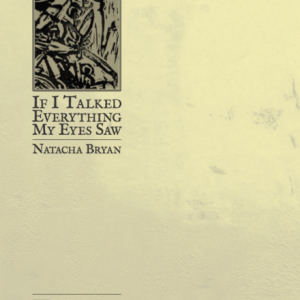 Omikemi Natacha Bryan’s pamphlet If I Talked Everything My Eyes Saw (Gatehouse Press) is shortlisted for this year’s Michael Marks Poetry Award.

Omikemi (Natacha Bryan) is a writer and a poet on the Complete Works III. Her work has been published in Ambit, Rialto and Ten: Poets of the New Generation, Bloodaxe. She currently works as a mentor and associate writer for Vital Xposure theatre.

Image: Salt by Gerwin Sturm. This image has been cropped and a filter has been placed over it. Licence.