Home » Blog » How I Did It: Michael Marks Award Special – Charlotte Wetton on ‘The Archivist’s House’

Ahead of the Awards ceremony on Thursday 12th December, The Poetry School has asked the five poets shortlisted for this year’s Michael Marks Award for Poetry Pamphlets to discuss the writing process behind a poem from their award-nominated work. Yesterday, Theophilus Kwek wrote about his poem, ‘The Crossing’; today, Charlotte Wetton talks us through her poem ‘The Archivist’s House’, which you can find at the end of this piece.

At first, I loved writing this poem. I felt I had a great concept – a man obsessed with hoarding his current and future lives until the unpleasant denouement. And there were associated atmospheres, imagery, and vocabularies to mine. Words poured out in the earlier drafts. I made mind-maps of ideas and vocabulary groups, and long lists of synonyms (such as thirteen different words for multiplying). I enjoyed pinning down the atmosphere with just the right adjectives — creating my miniature world. The first line came early and easily, as it often does, and this gave me the rather detached, narrative tone of the poem. I didn’t worry about the structure, I knew that would come in time.

It’s a lot of effort to write a poem. To stick with it, you have to believe in your original concept, to want to see it through. And I did, I wrote draft after draft. And then I entered the Quagmire of Indecision and Tautology. I knew the poem was baggy and needed tightening but there were so many words I wanted to use! My lovely word-hoards were my undoing (ironically). I re-wrote and re-wrote but never cut, even though I could tell the poem was unjustifiably long. The reason I wanted all the words was that they each gave a slightly different flavour. And because I’d put them together well it took me a stupidly long time to realise I was just saying the same thing again and again in different ways. A desperate note scrawled in my notebook reads “just say the right thing in the best way once!” Indeed. But I couldn’t choose best. The problem was that many of my lines were not much better or worse than each other, they were just different.

This is why poetry writing is such an inefficient business — you have to write pages of dross before you finally write something good, and then you find you’ve written too much good stuff and have to cut it! But however wonderful a line is, it doesn’t necessarily earn a place in the poem. It was remembering this which finally allowed me to cut — reminding myself I wanted one good poem, not twenty pages of brilliant notes.

Having resolved this, I then made the mistake of thinking I’d nearly finished, and began working on the structure. I have a preference for regular line lengths and verses and I worked towards this end — all of which later had to be unpicked.

I also had slightly too many concepts in there. I wanted to present the man in the poem as a civil servant, running a vast personal bureaucracy. In the end, I had to ditch this in favour of a clearer picture of the archivist. I cut lines like ‘a daily bureaucracy churning, machine-steady’. Another ideas-punch-up was between the organic and the mechanical. I wanted the list-production to be both a bodily function and a large scale industrial process. But after some more Quagmire time, I decided it was too complicated for the reader and for my poor brain. Another telling little note to myself reads “Doesn’t matter, just choose the idea that sounds the best!” Again, I was getting over-attached to individual components instead of considering the whole. The second half of the poem was much easier to write because it was conceptually simpler – the walls of his house growing heavier and hotter with the hoarded lists. But it wasn’t until the last minute, with the publisher asking for the final manuscript that I decided on the structure for the second half. It’s not very original – a chaotic structure for chaotic content – but it was needed; a more regular structure felt fake.

I hope I’ve learnt a couple of lessons from this poem, but to be honest I doubt it. If anyone’s found an efficient way to create Art, they’re keeping it very quiet. And also – I write poems to find things out. “Inspiration” for me is usually just thinking “That thing is interesting. Why is it interesting?” Pinning down the why – and the how –  gives a poem its driving friction, and is what keeps me going, draft after draft.

They broke down the door to the archivist’s house,
two policemen and a social worker, and found
his stacks. Lists ran over window-ledges,
skirting boards, between the lines of other lists:
Wanted and Unwanted Gifts, Money Spent and Regretted.
Ductal spooling and spinning of threaded thought,
he’d sweated ink, breath fogged with it
and the notes fattening, continually multiplying:
Useful Objects Found in the Street, New Foods Tasted
meticulously catalogued, references numbered
________________________________________but

self spread thin between choices
a lacewing smeared in a folio

only rat-runs between essential rooms now

round
the kernel of the man who husked himself
the fusty smell of his paper skins
the slow stifling heat
the weight. 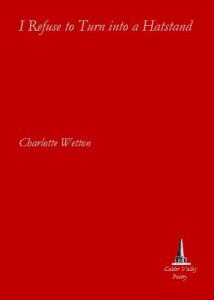 Charlotte Wetton‘s pamphlet I Refuse to Turn into a Hatstand (Calder Valley Poetry) is shortlisted for this year’s Michael Marks Poetry Award. She was born in the Midlands and now lives in West Yorkshire. She works as a  regional manager for a health charity. Her spoken word album Body Politic was released in 2012. I Refuse to Turn into a Hatstand is her first pamphlet.

Image: Lacewings by Mick Talbot. A filter has been placed over this image and it has been cropped. License.