Home » Blog » How I Did It: Michael Marks Award Special – Phoebe Stuckes on ‘Mad Chicks Cool’

Ahead of the Awards ceremony on Thursday 12th December, The Poetry School has asked the five poets shortlisted for this year’s Michael Marks Award for Poetry Pamphlets to discuss the writing process behind a poem from their award-nominated work. So far, Theophilus Kwek and Charlotte Wetton have talked about their poems; today, Phoebe Stuckes shares the inspiration behind ‘Mad Chicks Cool’.

The poet, translator, and, quite possibly, mystic Anne Carson once said: ‘if prose is a house, poetry is a man on fire running quite fast through it.’ In spite of my efforts to sit down and write, my poems have never quite managed to come on demand. The poems I have written that flow and sing the best are the ones that were completely unexpected and ran all the way through me seemingly whether I wanted them or not. This part of the process is, of course, usually the beginning of making something legible and halfway interesting, but it’s usually the stage where most of the poem appears. In this poem, it helped that I had a recurring phrase to anchor myself to; in a ‘rant poem’ it helps I think to use anaphora or some similar device to build up a conceit.

While ‘Mad Chicks Cool’ was written essentially in one of these frantic poetic rushes, I had been meaning to write it for a while. The title is a (since deleted) verbatim tweet response to a link to an event in which Theo Kwek, Jenny Danes, Helen Mort and I were performing. I thought it was a funny phrase. I thought it was insulting. It made me angry; I am always angry; it reminded me to be angry. Sometimes it seems we are living in a time of terrible ugliness in which this kind of offhand tweet is only a minute drop. Now, more than ever, I find myself pondering what it is that terrifies the white cis-hetero patriarchs of this world and how best I can embody that. I’m constantly wondering: how do we stay frightening and real and true to ourselves? The poem is about shame:

‘A mad chick is a bloodstain on a white skirt.’

It is about being absurd;

‘She has no mother of her own but gave birth
to herself in a shell or a dustbin.’

It is about being invincible;

‘Every time
you cut off the head of a mad chick, two more
sprout in her place.’ 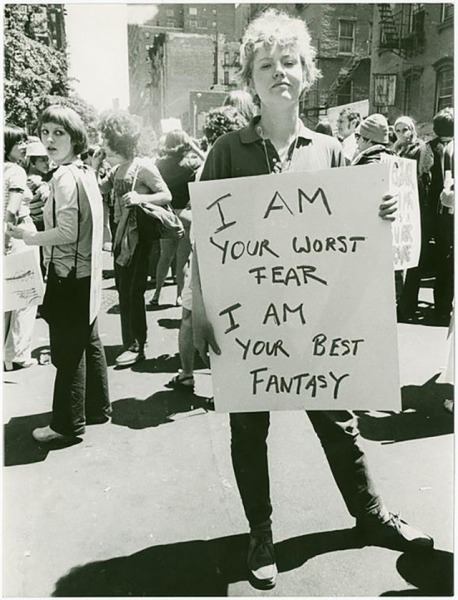 When I was trying to remember what I was thinking when I wrote the poem, I was reminded of a photograph of Donna Gottschalk (above), a lesbian activist and photographer, in one of the early gay rights demonstrations in the 1970s. She stands holding a handwritten sign that reads: ‘I am your worst fear I am your best fantasy’. Her gaze challenges the observer; she’s daring you to comment. I am interested in the ways women can be viewed as grotesque, whether that is for their queerness, their physicality or even their authority. There are a million positive human things that can make women seem grotesque. I wanted to turn these matters into a point of pride, oh you think this is bad? This is how much worse and how much more fantastic I can be. This idea, like many ideas in my writing, can be traced back to Sylvia Plath’s inflammatory poems in Ariel. In ‘Elm’ for example, the speaker describes vulnerability and strength in the same breath:

‘I have suffered the atrocity of sunsets.
Scorched to the root
My red filaments burn and stand, a hand of wires.

Now I break up in pieces that fly about like clubs.
A wind of such violence
Will tolerate no bystanding: I must shriek.’

The incontrovertible pride and dark magic of those poems is something I think I’ll spend my whole writing life trying to approach.

.My poetry is often a kind of controlled shriek. It always feels like an inadequate response, but sometimes it’s the only response I can muster. In many ways I find it easier to write something tongue-in-cheek about misogyny that I would to write dense and serious analysis about the ways women are viewed in our culture. Besides, a poem is not necessarily intended to convince or explain but to comfort and excite.

A mad chick is a bloodstain on a white skirt.
She has no mother of her own but gave birth
to herself in a shell or a dustbin. Every time
you cut off the head of a mad chick, two more
sprout in her place. Men want to fuck us
but wouldn’t spit on a mad chick if she
was on fire. Right now, a mad chick
is cosying up to your girlfriend on a velvet
chaise longue. Your new boss is a mad chick,
perhaps your mother was a mad chick
which is why you hate them now. Watch out,
the mad chicks are in the street outside,
ripping up the pavement with their tombstone
teeth, smashing shop fronts with their wings,
now there is nothing in this world that can stop them. 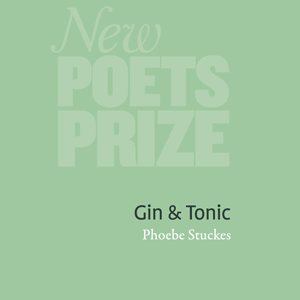 Phoebe Stuckes’ pamphlet Gin and Tonic (Smith | Doorstop) is shortlisted for this year’s Michael Marks Poetry Award. Originally from Somerset, she has been a winner of the Foyle Young Poets Award four times and is a Barbican Young Poet. She was the Ledbury Poetry Festival young poet-in-residence in 2015, and her poetry has been published in The Missing Slate, Rising, The Morning Star and Ambit, among others.

Image: gin and tonic by Global Jet. This image has been cropped and a filter has been placed over it. License.