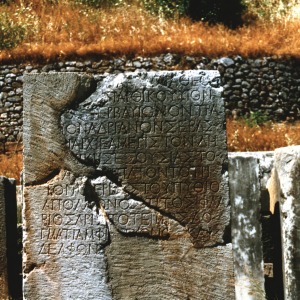 Poet and translator Anne Carson describes the act of translation as partly looking at the ‘gaps between words and the way meaning disappears into the gaps’. The same can be said of the act of reading ancient texts, positioning the reader in an ongoing relationship with limitation and with glimpses. Such is the case, for instance, when reading the surviving fragments of Sappho, where one might ‘glimpse down through the cracks to that other thing.’ In this course we will read excerpts from Ancient Greek and Latin poetry alongside striking examples of contemporary work while considering the finer details of ancient etymology. In writing our own responses to excerpts found in Ovid’s Tristia to what remains of Sappho’s original nine volumes of work, among others, we will take a curatorial view of what to keep and what slips away into an ‘other thing’. Generating new work will be helped by reading select contemporary poems – inspired by Classical poetry, of Sandeep Parmar, Denise Riley, Anne Carson and others, where we will see how ancient texts might inspire in us a unique prescription for contemporary living. We will explore a range of techniques and experiment with form – including erasure, language writing, and forms driven by the Greek technopaegnia figure poems – as we approach these ancient writings through the lens of our own lived experience and attune ourselves to the speculative records of time.

Transreading courses – co-curated with Elżbieta Wójcik-Leese – invite us to read poems brought to English by translation, English-language poems inhabiting other cultures, and multilingual poems whose English hosts other tongues. We translate texts and/or compose new poems in response to our readings; in this process of trans-reading and trans-writing we open our poetries to the multi-literate world.

Image credit: Institute for the Study of the Ancient World

‘As someone living abroad in a non-English-speaking environment, it has helped me connect more with English-language poetry and with people who share a love of it.’