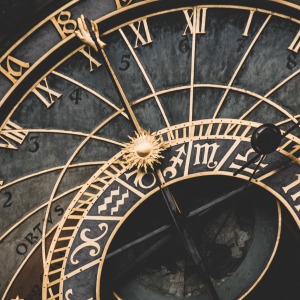 Set your clock to slow geological time and use poetry to explore the far future and the deep past.

‘The world is but a perennial movement. All things in it are in constant motion – the earth, the rocks of the Caucasus, the pyramids of Egypt – both with the common motion and with their own. Stability itself is nothing but a more languid motion. I cannot keep my subject still.’ – Montaigne

‘Consider the Earth’s history as the old measure of the English yard, the distance from the King’s nose to the tip of his outstretched hand. One stroke of a nail file on his middle finger erases human history’ – John McPhee

Deep Time is geological time, the sort of time that runs back to the Big Bang and forwards to whatever its opposite will be. Mass extinctions, ice ages, and the shifting of continents are all contained within its stride. This course will investigate the lessons we can learn from the beings and things that existed long ago and how we can look forward to a future so far away that we can barely conceive of it? Asking what was here before us and what will remain after humans are gone? We will use poetry to help us think about spacetime, extinction, and what will happen if humanity exists into a future far longer than our panic-ridden present leads us to imagine. We will set our clocks to chime only with every passing millennium.

Inspiration will be drawn from non-fiction including Robert MacFarlane’s Underland, Carl Sagan’s Murmurs of Earth, and Peter Godfrey-Smith’s Other Minds, plus, of course, Wikipedia’s ‘Timeline of the Far Future’.

Suzannah Evans lives in Sheffield and her pamphlet Confusion Species was a winner in the 2012 Poetry Business book and pamphlet competition, judged by Carol Ann Duffy. She has had poems published in The Rialto, The North, Magma and The Poetry Review and her poem ‘Helpline’ has been ‘Poem of the Week’ on the Guardian website. She has been a Hawthornden fellow and was one of the 2015 Aldeburgh Eight. Suzannah works as a teacher of creative writing and a poetry editor. As a teenager she had an obsessive fear of the apocalypse which has informed and inspired many of her poems, and she still doesn’t know whether it’s best to plan responsibly for the future or party like it’s 1999. Suzannah is the winner of a Gladstone’s Library residency for 2019 with Near Future.

‘The quality of teaching and course material has impacted positively on my poetry.’