In this first instalment, Greta Stoddart talks about the genesis of  Who’s There?, a radio piece tackling the topic of dementia through an interweaving of word, sound and music, first broadcast on BBC Radio 4’s Echo Chamber.

A few years ago I found myself holding a tray of fairy cakes on the steps of a large stone building in the middle of the village where I live.

I’d passed this building many times but never really knew what it was. Some sort of retirement home? I’d been helping out at a cake sale and when we had a load left over someone asked me to take them over to the building.

Inside, three people were slumped deep in chairs, staring into space. A woman was singing quietly. A man sat in a corner chewing on a large gardening glove. Another was being fed by a small spoon.

I was very struck by all this. The sense of a world within a world. Here was a completely different kind of living going on unseen right in the heart of our everyday life in the village.

A life I slipped back into with some relief with my empty tray.

Then one day – a year or so later and quite out of the blue – I wanted to write about it.

So for a year the Home, which specialised in people with advanced dementia, let me visit. For many hours I’d sit and watch and listen to the people there.

It was an extraordinary place for many reasons.

Sometimes I felt like I’d landed in a kind of strange existential drama: if you’re no more than the sum of your memories what does it mean if you don’t have any? Or if they’re so cluttered and confused you don’t even know in which room you’re sitting? Or decade.

Having lost your memories doesn’t mean you’re living in a constant present but that the present almost ceases to exist. Nothing props it up. There’s no context. I imagine this as being held in a kind of perpetual bewilderment at being: ‘Every morning I forget how it is.’ (‘Poem’, Charles Simic)

Another thing that struck me was the idea of behaviour; how we think we need to appear. The people in the home were once like you and me – adhering to and validating a limited set of behaviours – but now that they’ve strayed, through no will of their own, from that narrow path it makes us who are still on it very uncomfortable. What does that say about us?

I remember that painting by Masaccio where Adam and Eve are expelled from the Garden of Eden. The anguish on their faces reminds me of some I saw in the Home. Where are we? What have we done? Why can’t we go home?

There were many voices inside the Home; not just the real voices of the carers and residents but those inside me reacting and responding, as well as those coming from inside the residents, especially those who sat saying nothing.

I soon realised that the many different experiences – and realities – of people living with, or close to, dementia would need to be expressed in something other than a poem or a series of poems.

I was lucky enough to get an Arts Council grant which meant I could work with sound composer Jon Nicholls. From the beginning I felt the piece should be heard rather than read and that, as well as different sounds and music, the voices themselves would have their own texture – internalised or choric, overlapping or distinct. And I wanted these treated parts to play against real recorded interviews. I was trying to express, through sound and words, how it might feel to inhabit a shifting and unstable reality.

When I sat with actors at a rehearsal studio to record the piece it felt very natural to me and I realised that the two paths I’d followed in my life – theatre and poetry – had come together without me even realising it.

Nearly everyone is affected by dementia one way or another (“It’s part of our success at living longer”, as one doctor said) yet it’s nearly always reported in a fearful or negative way. The phrase ‘care home abuse’ has become a paradox so ordinary we don’t even think about what it entails.

And yet most care homes are places of profound care, staffed by people working on a low wage, who genuinely want to care for others – taking that one to the toilet, holding that one in tears. Yes, the Home was a place of suffering but also, and perhaps more importantly, of great care and kindness. Just as memories of entire lives were disappearing by the minute small gestures of love were constantly being offered to replace, or absolve, the loss.

I felt it was important to show this.

No matter how much you care for a dementia patient they will, at times, feel profoundly isolated, unmoored as they are from the great barrage of memories that is the life they’ve lived; spending their days drifting on the remaining time they have left. Which is something you could say for all of us. This is something I kept feeling; how this condition leads us to consider what it means to be alive and think and remember; to have a mind, and a self, simply because these are the very things that appear to have vanished. 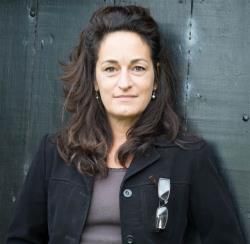 You can listen to Who’s There? (BBC) here.

Silver Tray by Holly Kuchera. This image has been cropped and a filter has been placed over it.