Omar Sabbagh’s Morning Lit: Portals After Alia offers us an extended meditation on early fatherhood, exploring what the poet describes as the ‘transformative distance’ travelled across the ‘entries’ of a relationship with his newborn daughter. Often lyrical, the poems here are also often very down-to-earth, giving us the reality of the early months of fatherhood in a way that gathers emotional impact by its accumulation of telling detail. The collection also moves outwards from this central focus, considering family and other themes more generally.

At the heart of the collection is ‘The Princess Gospels, Or, Diary of a Newborn…’, a highly unusual and deeply effective sequence of prose poems. These poems carry some arresting titles: ‘The Art of Shit’, ‘The Alchemy of the Burp’, ‘Saga of the Cut Cuticle’. As these would suggest, what we have here is a record of the way that so much of the anxiety of early parenthood is channelled through a focus on bodily functions:

Amira shat today – which is great news. It wasn’t as prolific a shit as we’ve come to expect by now, but it was certainly a robust attempt to ape former graces.

This scatological, diary-like approach is given an extra dimension by the extravagance of the imagery the poet uses to describe these subjects. I love the way that the baby’s excretions are overlaid with religious imagery, communicating the intensity of a parent’s watchfulness over a child:

Each time, usually three days or more in the making, Amira deigns to proffer us an excretion we are touched, and it’s like a small effort at redemption, or a kind of shriving for us; as though our new-born girl’s shit made claim to resume the burden of both the batches of her parents’ sins.

Another section from this sequence, ‘The Functionary’, also begins with an extremely grounded episode, as the father is called in to divert the baby girl while the mother is changing her nappy.

This leads to a charming self-portrait:

It must have been a comical sight, as I stood there, one eye closed, one eye trying to be on the up and up, my hair a wide-spangled fiasco, my words, drooling numbers, and my right hand keeping up the effort to shake the small orange dinosaur whose belly made a rattling sound.

Again, here, Sabbagh’s approach is to overlay this everyday episode with that extravagant imagery mentioned earlier, this time drawn from the world of work and politics:

I felt like a functionary, hauled in to do menial labour. Or, in a more decorous idiom, like a civil servant to the other two – wife, child – branches of government: namely, judiciary and executive. And it seems to my weary eyes that the revolution, should it ever come (even in the wake of this prolonged metaphor), will not arrive any time soon.

I love the fluttering of the curtain that happens in brackets here, the way that the poet sends up his own construction of an elaborate metaphor, even as he’s constructing it. While the poem is a beautiful exploration of love for a daughter, moments like this also show the poet’s skill in building a relationship with the reader.

Of course, the writer’s humility here is very much in keeping with the humility the poem tells us all fathers need. This is reinforced in the extremely interesting final sentence:

Us men: husbands, fathers: we are cattle, more meat than helpmeet – but happy perhaps to be so; and from time immemorial.

This sentence has an intensely writerly and complex construction – all that punctuation! There’s a grandeur here, as the poem shifts from singular to plural first person – ‘Us men’ – and seeks to speak for all ‘husbands, fathers’. This, together with that double colon, raises such expectation, but what follows is ‘we are cattle’. This, then, is a writer with an extremely skilled management of tone, but also a writer who’s willing to go to places in terms of subject matter – bodily processes, small orange dinosaurs – that much poetry avoids. This combination makes ‘The Princess Gospels’ an idiosyncratic, memorable and moving expression of love.

If Sabbagh has a singular and fascinating conception of the prose poem, it’s also true that this collection includes a number of strong poems which make effective use of line and stanza. The poet has a subtle sense of the musical potential of language, which enriches without dominating his verse. A good example of this comes in the poem ‘Where Does a Man Go?’, which is among a series of poems dedicated to the poet’s father.

The poem is built around two sets of repetitions, with the repetition of the question from the poem’s title being balanced by the repetition of a command, ‘Look.’ The imperative is in itself engaging, but what’s then intriguing is the mixture of things we’re asked to look at, the language moving through concrete locations and even onomatopoeia, to abstractions such as love:

Look, for instance, at this large square room

Warmed by a furnace we may call love. Then look

At this drum: it longs for its beat-beat to return from

A supplicant’s waylaid prayer, as God, in good time, took.

The final stanza of the poem returns to these commands, with the insistence of the imperative opening out into a lyric description of a relationship with a father, which manages to be evocative of an emotional experience, while also being bodily grounded. If the range of things the poem has asked us to consider has generated any sort of fascinated confusion, this only serves to deepen the impact of this final sentence, which offers clarity, importance, and a physical focus:

Again: these are the farthest reaches a man can take

Towards a father, or what flesh and blood become.

This attempt to describe emotional life in a concrete and bodily way resonates with so much of what Sabbagh does. Morning Lit then is a collection which is able to overlay observations of a newborn daughter’s bodily functions with elaborate imagery, and to ground emotional connectedness to a father in bodily images. As such, working through a range of formal approaches, this collection gives us a take on familial love which is, at once, one which every reader can share, and which also feels like a glorious one-off. 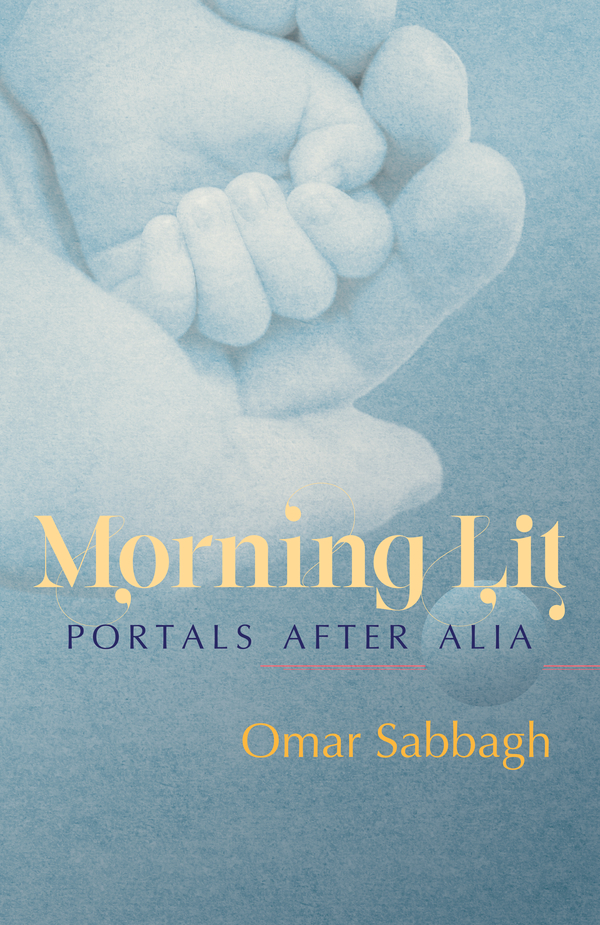 Morning Lit: Portals After Alia by Omar Sabbagh
You can buy the book here