In the latest of our series of feature-length interviews with independent publishers, set in our imaginary poetry theatre pub somewhere in Lambeth, we spoke to James Davies of if p then q…

Hello there, James! What are you drinking?

James: I’ll have a Death in the Afternoon cheers.

How long has if p then q been running?

What were some of the practical things you did to get started?

Does your personal background lend itself being an independent publisher?

Where does the name if p then q come from?

James: It’s phrase from Wittgenstein as far as I’m concerned, although he didn’t coin it of course. His concerns are the concerns of if p then q.

Could you describe the sort of poetry you publish?

James: I’d say if you thought of Minimalism, Language Poetry and Conceptual Poetry you’d be coming to the right sort of place.

How are you different from other independent publishers?

James: That would be a pretty bold statement to make but certainly there aren’t many UK publishers around with if p then q’s catalogue.

On average, how many books do you sell in a year?

Do you sell more online or by wholesale/retail?

James: Online. I can sell books much more cheaply this way. Books are sold at fairs and at readings too.

What have been some of your biggest successes so far?

James: The list is incredibly solid, and that was an aim; solid as individual titles and as a group of books which are in dialogue with each other. I could name each book in turn if you like… In 2014 I was privileged enough to publish the collected works of P. Inman, one of my heroes and one of the greats.

What’s the best thing you’ve found from the unsolicited pile?

James: I’ve seen lots of good things of interest unsolicited. However I only have the space to publish around 4 titles a year which I’ve already planned in advance to ensure the standard of the press remains where i want it to be. I think there is just one title that fits the bill of an unsolicited and published book and it is a cracker: Derek Henderson’s Thus & which is a redaction of Ted Berrigan’s The Sonnets, such a beautiful homage to Berrigan.

How important is the physical book design for you?

James: Very. From the start I decided that the standard trade paperbacks I published would have a standard bold design which say ‘this is an if p then q book, you need it’ in the same way that we’re drawn to a Penguin or Carcanet title say. 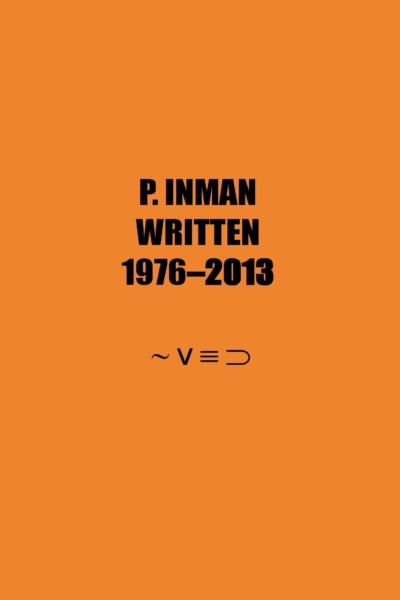 Who prints your books?

James: Lulu. They’re efficient and generally very good. They allow for POD. Excluding my labour the price of printing makes my break even model possible.

Could you describe your editing process? And how long does it take start to finish?

James: Pretty hands on. Since I work with a limited amount of people we can spend time talking to each other to make the book look good inside and for it to have the right structure. I love working with the if p then q poets, I mean it’s a real honour to be working with such fine poets, all of whom are lovely people too (although that doesn’t have to be a prerequisite). I start by suggesting and explaining edits to poems, suggesting perhaps some poems to remove and the structure of the contents. I think an editor owes that to the poets. After that we’ll proof, send for a print proof and then go to press.

James: I don’t accept submissions at the moment. I do a lot of work on if p then q but since it isn’t the only thing in my life I just don’t have the energy to look and reply.

What are some basic mistakes people make when submitting to you?

James:When I did accept submissions there were some people who didn’t have any idea of the style of if p then q books. I would not expect anybody to buy books in order to send to me but I would expect them to do some research otherwise it’s a waste of everybody’s time.

Where do you look for new writers?

James: I keep up-to-date with important reading series. Although it’s impossible to keep a complete list Peter Philpott does a tremendous job at http://www.modernpoetry.org.uk/readings.html I’m not really on Facebook but I get event invitations sent through to the mailbox and I’ll attend those events. If I can’t attend but I like the sound of the author then I’ll read their work. I read a lot of books in general and return to great publishers often.

What advice would you give to poets today trying to get published?

James: The age old one, that must come top of the list, is ‘read’. If you’re not reading then you won’t be a good writer. Continue reading, keep in the loop of contemporary writers. Go to poetry readings by writers you like, and talk to people. From a writing point of view spend a LONG time writing, revise everything, write the poem another way, even if you think it’s done. Write lots of things. Put lots of things in the ‘junk’ pile. Get people to read your work and ask for honest feedback, be able to take feedback whatever it is. If the work is fantastic there are enough small press publishers with real kudos to publish the work.

How do you pay your writers? How does remuneration work?

What is your approach to marketing and promotion?

James: I try and do as much as I can. Books always have a launch. I use all social networking sites, mailing lists, etc. to advertise the books. I send at least 10 copies out for review and usually get one or two reviews out of that. I put a lot of hours into if p then q but ultimately it is not my living, so although there are other ways that I could market the press I don’t have time, money or energy. Tom Chivers, editor of Penned in the Margins, is a very impressive example of someone who has made it work for him; done with lots of blood, sweat and toil like everyone else I should imagine. 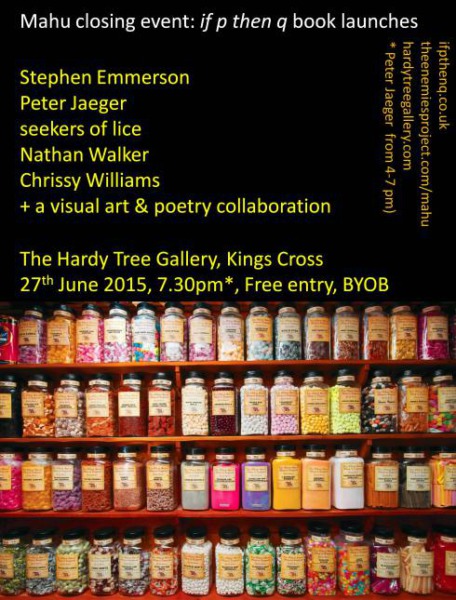 Do you make any money from publishing?

James: Nope I break even on each title. That means that after I have given 10 author copies, sent out 10 copies for review and 6 out gratis to the UK libraries, plus spend money on various hidden costs – envelopes, domain renewal, etc – and I sell 70 or so books then the bank is just in the black.

What would help? Do you think the state or any other institution should do more for independent publishers?

James: This is a massive question and if I were to answer it properly I think you’d need to ask the barman for the Cognac. The current government’s attitude to the arts at every level is a disgrace. They are truly shameful people, just in terms of this aspect of life alone. The Arts Council does do a good many things to support poetry with the money they have. Is enough done by them in terms of how the pot is divided? I’ll take that brandy now in any case.

Do you work full-time as a publisher?

James: There have been weeks where I’ve totted up 20 hours with if p then q on top of my day job but nope, afraid not.

Who distributes your books and where can I buy them?

James: All available at www.ifpthenq.co.uk

Apart from books/pamphlets, what else do you make?

James: I’ve published about 10 curios and will continue to do so as ideas crop up. Simon Taylor drew some beautiful original drawings to create a wonderful pack of poetry Top Trumps. Another great oddity is Stephen Emmerson’s Poetry Wholes which are a set of acrylic templates for making instant poems. For example there’s one in the shape of a sonnet and if you put it over any book hey presto you have a readymade sonnet.

What advice would you give to someone starting their own independent publishing business today?

James: Do it if you’re sure you have the energy to make a decent-sized list of decent writers. Work that out first before you begin. That is to say any publication house should have meaning.

Note: a selection of these questions have been taken from Cyril Connolly’s 1946 ‘The Cost of Letters’ survey.