With the deadline for  Primers Volume Three, our mentoring, editing and publication scheme, just around the corner, we thought we’d catch up with last year’s Primers  poets, Marvin Thompson, Ben Bransfield and Cynthia Miller, to find out about their experience on the scheme. You can buy their book, Primers Volume Two  here!

To apply for Primers Volume Three, click here. The deadline is 8th September!

First things first, how did it feel to be chosen as one of the three Primers poets?

Cynthia Miller: Like that moment just before the rollercoaster drops: your heart’s in your mouth and you know you’re in for an exhilarating ride. I had attended the Primers Volume One launch at Wenlock and was bowled over by their poetry, so it was definitely thrilling, humbling and rather daunting to have to follow that up!

Ben Bransfield: Obviously, amazing. My first thought though was that maybe only three people had entered! I remember some increasing anxiety too, entangled with the excitement; there was a threshold I had to cross with some of the poems that eventually went into print.

Marvin Thompson: My Primers success was unexpected; I’d grown used to rejections. For a while after the win, I felt invincible! Now that the emotions have settled down, what has stuck is the knowledge that for some readers, my poems are wonderful. Which poet wouldn’t want that?

Throughout the early part of the programme, you received one-to-one mentoring. How did you find that experience?

Ben Bransfield: How lovely to be able to listen to someone else – who has been so carefully listening to you. In our first conversation, Jacob [Sam-La Rose] & I openly covered more intimate ground than I have with some partners and family members. I think this is because we both knew it was the work being mentored, not me; in a good way, I was irrelevant and it was the words on the page that mattered.

Cynthia Miller: Invaluable. I knew what to expect from the editing process but not mentoring – it turned out to be a wonderful chance to speak to two seasoned poets about what it means to be a writer, what success looks like, and how to develop. My day job isn’t in literature or the arts so that opportunity to get their insight meant so much.

Marvin Thompson: The mentoring sessions with Jacob Sam-La Rose were a pleasure. Jacob was very generous with his time and his comments have helped me become a more adventurous writer.

The final book – Primers Volume Two – was edited by Nine Arches Press editor Jane Commane. Was this the first time you’d worked in-depth with an editor on your poems? What difference did it make?

Marvin Thompson: Firstly, Jane was very clear about why she liked my poems. For any writer, it is important to know what you are doing well so you can do more of it.

Much like Jacob, Jane made me more aware of a reader’s need for clarity. She also taught me how to use punctuation like rests in music. Consequently, I have developed my ability to manipulate the rhythm of my poetic lines. My poems are now more musical.

Ben Bransfield: Yes, and it’s made the difference of trust. Jane really knows her stuff (most importantly, she is an excellent poet herself) and she has that gift of showing you where something could be worked closer to the truth – but letting you find the right solution for yourself. We had a real laugh along the way despite some heavy subject matter, and after several adjustments and changes it is great to feel content with and proud of those final published poems.

Cynthia Miller: Yes, it was. Prior to Primers, I’d only had two poems published in a magazine, so the process on working on a pamphlet-sized project was totally new to me. Jane and Jacob both are such generous, insightful and thoughtful editors, very alive to everything that I was trying to get at in my work but with a laser-like focus on how to make each poem stronger and the wider body of work really sing. There’s nothing quite like getting that undivided attention. Beyond individual poems, they suggested other poets I could learn from and opened my eyes to the importance of sequence and ordering which has been so useful.

Do you feel that your poetry has changed over the course of Primers? Where are you now compared with last year?

Marvin Thompson: Winning the Primers competition has galvanised my belief in my own poetic voice. For this, I glow with gratitude; if I am lucky enough to publish a full collection, I want the poems to represent me in my fullest form.

The mentoring and editing sessions were also spaces for me to analyse my use of imagery. Now, I am more conscious of constructing images that work together like different parts of an aeroplane. Perhaps this makes me less poet and more engineer!

Furthermore, I was challenged by Jacob to build upon my use of traditional poetic forms by creating my own. I have now devised a form that is shaped around my desire to write more personal poems. With this form, I am writing a sequence about my own experiences of being a father. New ideas are taking flight.

Cynthia Miller: More than anything, it’s been a mindset shift. I’m now much more confident in sending work out to competitions and magazines. Primers also gave me the courage to explore the themes and topics I’ve always just let marinade – it gave me permission, in a way, to have fun, take risks and dedicate proper time to writing.

I also have a loose idea of a pamphlet sequence that’s forming (kickstarted by two of the poems in Primers, actually!), so am excited to see where that leads.

Ben Bransfield: I am writing more and the focus of my gaze in recent work has moved into more vulnerable spaces, which Primers has given me confidence to do. I am listening more carefully to a broader spectrum of rhyme and can feel when something isn’t working. I was shortlisted in this year’s Poetry Business Competition with a second pamphlet – quite different to Primers – that I am currently trying to place, had my first poem accepted for publication in the US, wrote a feature piece for a UK journal and another for a blog, and have new poems forthcoming online (And Other Poems; Ink, Sweat & Tears) and from publications that I regularly read and admire like Acumen, Stand, The Interpreter’s House, and The North.

Were there any unexpected benefits to Primers?

Cynthia Miller: It’s such a rich experience. Obviously the privilege to read in at different festivals (watch out for us at Kenilworth Arts Festival and Poetry Swindon!) but also the fact that you really do become part of the Primers family – the friendship and support of Ben and Marvin, as well as the Primers sisters from Volume One, was wonderful.

I didn’t properly appreciate how impactful it was to carve out a time and (head)space for my own poetry, which is something I’m taking a lot more seriously now.

Ben Bransfield: Cynthia and Marvin are like two newly discovered siblings – we’re in it together, enjoying each other’s work, and the exposure and confidence-building from the tour (Birmingham, London, Kenilworth, Swindon, Trowbridge…) has been great for all of us. My sixth formers came to support and hear me read at Waterstones Piccadilly, which was a complete surprise and the loveliest thing you could ever hope for as a teacher.

Marvin Thompson: I’ve really enjoyed getting to know the work of fellow Primers poets, Cynthia Miller and Ben Bransfield. Their use of language is surprising and a delight.

Moreover, during the mentoring process, Jacob gave me several suggestions for further reading. These suggestions led me back to an area of art I have neglected – poetry written through a Caribbean lens. Being of Jamaican parentage, I have relished re-aquainting myself with the work of Kwame Dawes, Malika Booker and others. What a joy!

Finally, what advice would you give to poets thinking about applying for Primers this year?

Cynthia Miller: If you don’t submit, you may end up kicking yourself later! Seriously though, very few initiatives are just for emerging poets and offer one on one feedback with two editors at the top of their game, publication with such a nationally respected press as well as mentoring and development. It will push you in all the right ways. Go for it.

Marvin Thompson: My primary advice for potential Primers poets is to gather your best work and send it in!

Try to read your poems with an editor’s eye. Ask yourself (or an honest friend) if you are communicating your ideas clearly.

You could also try editing in stages. For example, you could read one or your poems once and only focus on editing the verbs. In this way, ‘eating’ (a dull verb) becomes ‘slurping’ (a powerful verb). Then you could re-read the poem to focus on your use of imagery. Of course, every poet will have their own checklist of component parts to focus on.

Ben Bransfield: Send the poems you’d be really worried about your grandma reading – that you yourself are worried about reading – where you have invested some dose of personal risk. 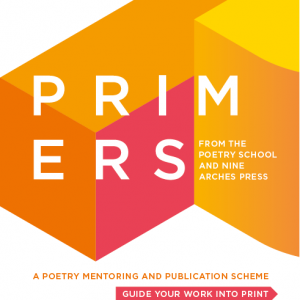 The Primers scheme provides an important platform for emerging poets who are seeking to develop their writing and build towards a full collection of poems. With the involvement of Jane Commane ( poetry editor at Nine Arches), Hannah Lowe (poet) and the Poetry School, Primers 3 will nurture and supports new talent that may otherwise not find an outlet. It also aims to provide an important opportunity for poets to develop their skills, work on their poetry practice, and find audiences for their work. Following editing and mentoring with Hannah and Jane, the Primers Volume 3 collection will be published by Nine Arches Press, and a further series of live events will showcase the three chosen poets at festivals and shows around the country.