Home » Blog » I know what I know, says the almanac

In defence of the sestina: part 3

‘Sestina’, a widely anthologised poem, is one of two sestinas Elizabeth Bishop published. (The other is ‘A Miracle for Breakfast’.)  I first came across ‘Sestina’ in the third edition of The Norton Anthology of Poetry, the doorstopper required for a creative writing class with WN Herbert in 1987. 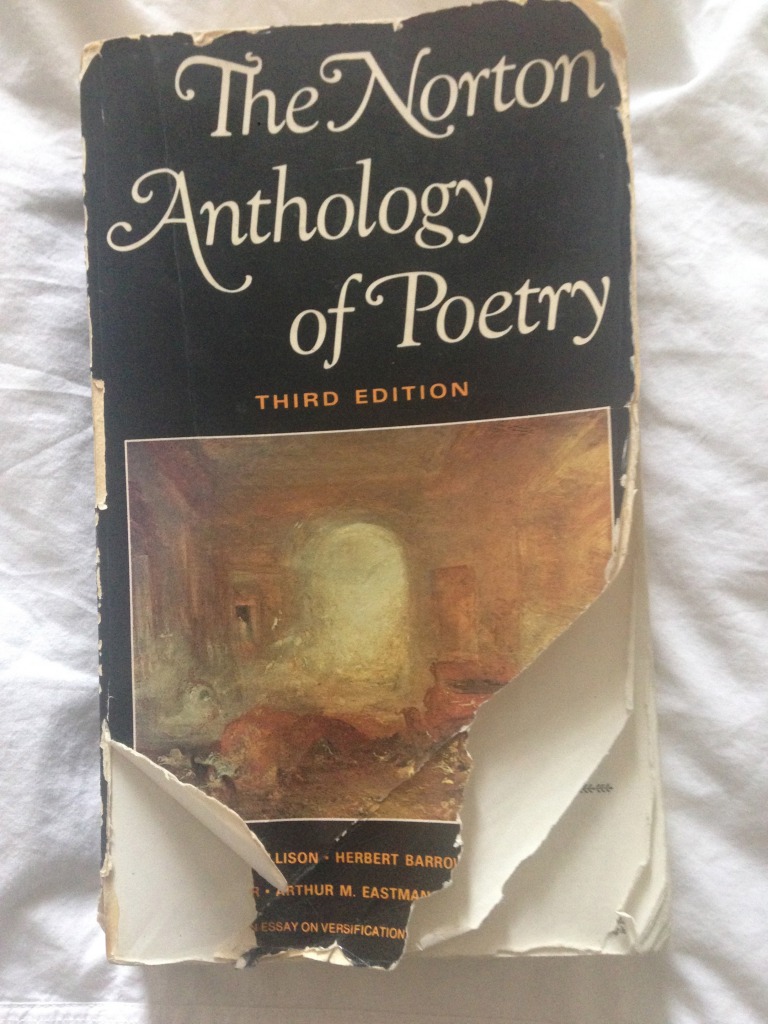 ‘Norton Anthology of Poetry, 3rd edition, after 27 years of use

‘Bill,’ as WN Herbert is known, was one of several young tutors leading an enrichment programme for American teenagers predominantly from the Tristate area (i.e. New York, New Jersey and Connecticut) but also from elsewhere on the East Coast and even Canada. Although the course took place at various Oxford University colleges, it was unaffiliated with the real Oxford. I emphasise this point because people who went to the real Oxford sometimes say to me, ‘You are aware that your American summer camp had nothing to do with the real Oxford?’ and I reassure them I am aware.

Bill had been to the real Oxford and had probably graduated not many years before he took on this job teaching hot-housed but clueless American high school students who had never heard of Chaucer and who, having come from a country where the drinking age is 21, were more interested in sampling British beers than British poetry. In addition to assessing our terrible poems, Bill heroically chaperoned field trips to Salisbury Cathedral and Stonehenge and took us punting. He introduced me to my first pub lunch where everything on the chalkboard menu sounded violent or simply unappetising (bangers? toad in the hole?) so I went instead for a short walk and got lost.

Bill taught us the impossibly erudite expression ‘formal poetry.’ He asked us to write our own formal poem: a sonnet, villanelle or sestina. Having been a ‘Hockey, hockey’ fan, I naturally chose the sestina. The versification essay in the back of the Norton anthology included detailed instructions on the sestina pattern, with Bishop’s ‘Sestina’ as a model.

Bishop’s sestina had very different qualities to those of ‘Hockey, hockey’. For one thing, it was quieter. Thanks to Bill’s discussion of Browning’s ‘Andrea del Sarto’ to illustrate the ‘persona poem’ the week before, I understood retrospectively that ‘Hockey, hockey’ was a dramatic monologue.

Bishop’s narrator, by contrast, is distant and objective. There is no macho ‘fury’ as there was on the hockey rink. Here, instead, the arena is ‘feminine’ (by the standards of the era): the kitchen. Bishop places us in the kitchen of a house on which ‘September rain falls,’ a grandmother ‘busies herself about the stove’ and a child draws pictures. The grandmother talks and laughs in an attempt to ‘hide her tears’ while the grandchild looks up from her drawings to observe the grandmother and to watch the teakettle’s ‘small hard tears’.

That ‘tears’ is an end word signals a sadness that is never explained. And the reader can project anything on to those tears: nostalgia, death, the passage of time, a bleak future foretold by the almanac, or some undisclosed domestic drama.

That a sestina requires six words to be used seven times, and that the repeated words are emphatically placed on the end of lines, is one of the advantages of the form—but only if the words are used as cannily as Bishop uses ‘tears’ which, in a less controlled poem, would probably have sounded sentimental.

From my adult perspective on Bishop’s relatively small body of published work and the details of her life, I can’t help but view the child as a version (however altered or reimagined) of Bishop herself. Bishop, whose father died when she was one, and whose mother was permanently committed to a mental institution when Bishop was five, spent her early childhood with her maternal grandparents in Nova Scotia. Eventually she was made to move to Massachusetts to be with her paternal grandparents, who had more money.

Does the imaginative child who occupies this sestina—this child who sees little moons ‘secretly’ fall down from the pages of the almanac and who draws buttons resembling tears on a man’s coat (it is said that creative and intelligent children fill their drawings with details)—see the ‘equinoctial tears’ the grandmother attempts to hide? We don’t really know because it’s unclear who the ‘she’ is in the first line of the second stanza:

She thinks that her equinoctial tears
and the rain that beats on the roof of the house
were both foretold by the almanac,
but only known to a grandmother.

While I used to be troubled by the ambiguity of that pronoun ‘she’ (what is its antecedent: the child or the grandmother?) I now think it’s intentional. This small child, with her drawings of ‘inscrutable’ houses and ‘winding’ pathways in ‘failing light’ is obviously aware that life is neither straightforward nor necessarily happy. In fact, she sees tears in everything.

With its Little Marvel Stove and distant tone, this sestina has a sheen of the past. The poem is utterly composed, not only in tone, but in its controlled metre of four-stress lines. It’s all artifice: the house, the child, the almanac, the stove, the grandmother. The picture is drawn for us in the stylized manner of a child. Although the deeper story is hinted at in the details, the child doesn’t yet have the psychological maturity, or the information, to understand her situation fully. The sense of ‘artifice’ and shrewd naiveté is enhanced by the artificiality of the sestina form.

As for myself, I had neither the life experience nor technical proficiency to write a sestina for Bill that could begin to do Bishop’s ‘Sestina’ justice. I attempted, but couldn’t finish, a poem that addressed a friend who had moved to Minnesota. I thought that ‘Minnesota’ would make an exhilarating end word, a bit like ‘slapshots’ from ‘Hockey, hockey.’

When I showed my effort to Bill, he suggested that ‘Minnesota’ might not be such a great end word after all, as it doesn’t allow for much flexibility, and might have been the reason I got stuck after stanza three. He also admitted, incidentally, that he didn’t know where Minnesota was. That, too, was a crucial lesson for me: that America was not necessarily the centre of the universe.

At the end of my month at Oxford, I returned to New York, and I was permanently changed. I had decided to become Bill, or some version of Bill, this eccentric teacher with the Scottish accent who swanned about the class doing T’ai Chi moves and the occasional headstand, and whose electric teaching style made me love poetry even more than I already did.

When I developed the photos I took of my month in Oxford—shots of tourist attractions, tutors, and the other kids on the course—I absentmindedly used one as a bookmark, and it happened to be a photo of Bill. I returned the book to the school library, with Bill’s photo still in it, and was mortified when Mr B, my former English teacher, found the photo and ascertained it was me who last borrowed that book. He returned Bill’s photo, asking no questions. I offered an explanation about Oxford, sestinas, Bishop, Browning and Bill Herbert, but he seemed unconvinced that I could keep a man’s photo for the love of poetry.

I moved to London 12 years later and wrote a letter to Bill thanking him for being such a good teacher. He admitted, apologetically, he did not remember me as he’d had many students during that era.