Home » Blog » By Heart in C Minor: On the ‘Drawing Poetry’ Residency

Throughout August, six poet-artists took part in our ‘Drawing Poetry’ residency with the Centre for Recent Drawing.

Sria Chatterjee, John Sheehy, Eleanor Penny, Claire Collison, Neringa Dastoor, and Iris Colomb spent a month in the studio at C4RD and attended workshops with poets Holly Corfield Carr and Chris McCabe, and artist Jamie John James Jenkinson, as well as one-on-one tutorials with Gordon Shrigley. The residency was intended to allow the chosen poets to experiment with work at the nexus of poetry and drawing. Over September, we’ll be displaying a selection of work completed during the residency.

The second poet-artist is Claire Collison.

I don’t like the word hybridise, but I used it in my application for the Drawing Poetry Residency.

I started as a visual artist, only writing seriously fifteen years into my life as a photographer. Even then, I switched between short story, novel and, eventually, poetry. I always claimed it mattered little what tool I used, camera or laptop: whatever served the idea best. But it wasn’t that straightforward, and recently it’s felt as though I have been dividing aspects of myself into ‘writer’ bit and ‘artist’ bit – the meditative v the impulsive, the mind v the body. As my recent work reflects on my experience of breast cancer, attempting to bridge the chasm in orthodox treatment between objective/subjective, doctor/patient, feeling/thinking, this is something I’ve been keen to address.

So I thought I knew that I wanted to do with the residency: I wanted to storyboard poems into film poems, to illustrate transcripts of interviews on my medical images, to write visual poems (whatever that means) –  to ‘hybridise my practice’. In the end, I didn’t do any of it. Which is to say, I did, but it didn’t hit the spot. And that’s the fantastic thing about a residency: having un-pressured time and space to try things out, and it being okay if they don’t work. The one thing I wrote in my application that remained true was this: ‘I want the structure that will enable me to play’ – and that’s what I got: a delicious and terrifying month to ponder and play. The things I thought I wanted to do turned out to be illustrations for poems that were complete in themselves, or text added to pictures that directed the viewer too literally, and limited interpretation. But the other thing with a residency is the self belief it gives you. As we all know, creating is a confidence trick, so being privileged with the opportunity – being chosen, and having my ideas taken seriously – made me brave. And being surrounded by likeminded folk gave me faith, along with a work ethic.

Many false starts later, I began using my old medical letters for erasure poems, keeping only words that had an emotional register – tenderness, happy, etc. There seemed to be something here, about what’s missing, the nuances of the medical idiolect, the unsaid and unsayable, that I wanted to pursue. I made two small pieces that seemed promising, and that fulfilled my self-set agenda of being more than a sum of their parts. One was a drawing ‘Your East/My East’ made, following a workshop with Chris McCabe on concrete poetry, in an old invoice book, so that the carbon paper produced a mirror image. This was inspired by the drawing my surgeon made in preparation for my mastectomy, where my left breast appeared on the right hand side (is that stage left?) I wrote EAST on the ‘left’ breast, which appeared in reverse on the opposite page. This resonated. 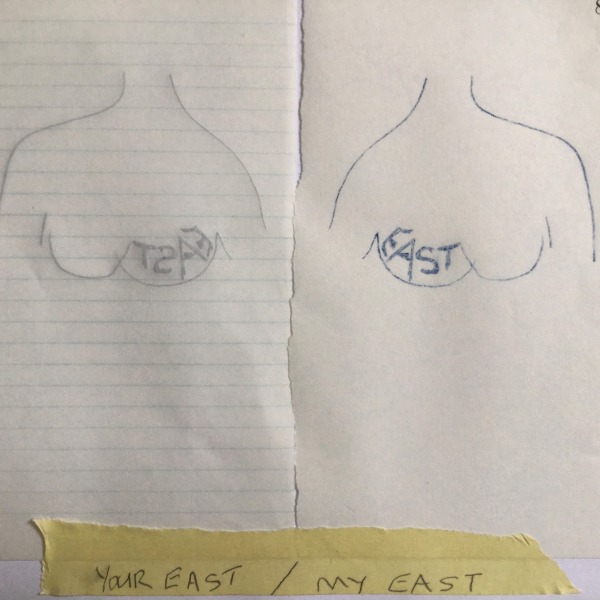 Your East / My East

The second piece came from an ECG. Due to a change in my meds, which created a risk to my heart, I was sent to a clinic in Streatham for tests (at the time I begrudged the waste of a residency day). I was given the A3 print-out of my ECG, and entrusted to take it to my GP for dissemination. Instead, I took it to Highbury Library and made some photocopies. These became ‘BADA – BING: Slave to the rhythm’. This felt very exciting. Talking to Gordon Shrigley about these two images during a tutorial, he encouraged me to develop the musical notation. It didn’t take a lot for me to then imagine how this might work as a transcript for a musical box. 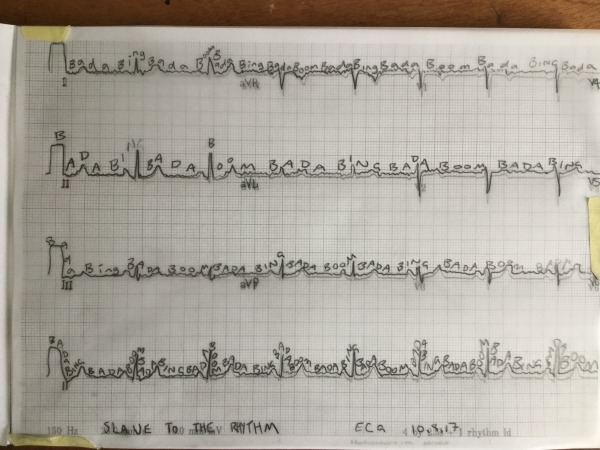 BADA – BING: Slave to the rhythm

The process of writing for musical box involves punching holes, like a bus conductress. I found this idea very pleasing – the negative spaces creating the sound. The process was physical and analogue, and yet the binary mother of computing. I flipped a second copy of the transcript and spliced the two together, so that it reached a middle point and then played backwards, repeating the mirror symmetry of the ‘East’ drawing. I had no idea what it would sound like until I fed the paper in. It was magical! Spooky, filmic, nostalgic, and in the key of C minor (who knew?) It echoed with the ghosts of so many songs – one in particular to my mind was Cole Porter’s The Physician –

He said my maxillaries were marvels
And found my sternum stunning to see
He did a double hurdle
When I shook my pelvic girdle,
But he never said he loved me.

So this is what came out of my Drawing Poetry residency: nothing hybridised, and neither a poem nor a drawing, but a transcript of an ECG for musical box. What I am certain of is that it wouldn’t have happened without the residency, and for that I am massively grateful. What will I take away from the month? Firstly, permission to be playful, and secondly, trusting that even (or especially) when it feels like you don’t know what you’re doing, something will come from an investment of focused time and energy. And it may not be what you were expecting. 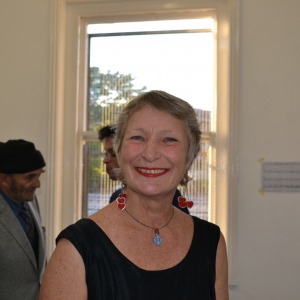 Writer, photographer, creative facilitator, and breast cancer survivor, Claire Collison was one of the ‘Drawing Poetry’ residents, and is currently Artist in Residence at the Women’s Art Library (WAL). Her first novel was a finalist in the Dundee Book Prize, and her short stories and poetry have appeared in print and online. In 2015, she was awarded second place in the inaugural Resurgence Prize, the world’s first eco poetry competition, judged by Sir Andrew Motion, Alice Oswald, and Jo Shapcott.