In defence of the sestina: part 4

Here is an incorrect story I tell.

To corroborate my memory, I dug up my spring 1999 Ploughshares, guest-edited by Mark Doty, which contained both my ophthalmology poem and Jonah Winter’s ‘Sestina: Bob.’

In fact ‘Sestina: Bob’ is nowhere near my poem. My own poem appears earlier in the magazine and stretches across two pages. So the only thing sneering across the page at my poem is my poem.

The fallibility of my memory aside, ‘Sestina: Bob’ was the standout poem in that spring 1999 issue of Ploughshares. It won the Cohen Award for the best poem published in Ploughshares in 1999, an award that is comparable to the The Poetry Review’s Geoffrey Dearmer prize.

‘Sestina: Bob’ has subsequently appeared in Winter’s full-length collection Maine: Poems and in the aptly named Incredible Sestina Anthology edited by Daniel Nester, where Winter’s sestina is referred to as ‘world-famous.’ 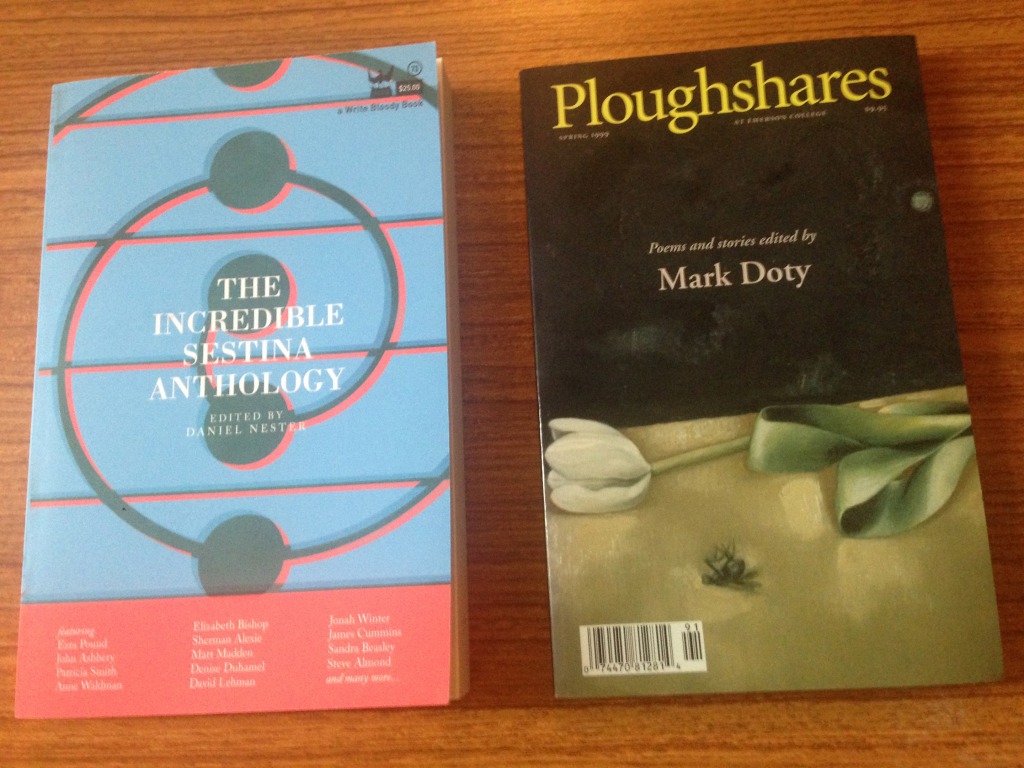 Winter has given me permission to post ‘Bob’ in its entirety here:

According to her housemate, she is out with Bob
tonight, and when she’s out with Bob
you never know when she’ll get in. Bob
is an English professor. Bob
used to be in a motorcycle gang, or something, or maybe Bob
rides a motorcycle now. How radical of you, Bob—

I wish I could ride a motorcycle, Bob,
and also talk about Chaucer intelligently. Bob
is very tall, bearded, reserved. I saw Bob
at a poetry reading last week—he had such a Bob-
like poise—so quintessentially Bob!
The leather jacket, the granny glasses, the beard—Bob!

and you were with my ex-girlfriend, Bob!
And you’re a professor, and I’m nobody, Bob,
nobody, just a flower-deliverer, Bob,
and a skinny one at that, Bob—
and you are a large person, and I am small, Bob,
and I hate my legs, Bob,

but why am I talking to you as if you were here, Bob?
I’ll try to be more objective. Bob
is probably a nice guy. Or that’s what one hears. Bob
is not, however, the most passionate person named Bob
you’ll ever meet. Quiet, polite, succinct, Bob
opens doors for people, is reticent in grocery stores. Bob

does not talk about himself excessively to girlfriends. Bob
does not have a drinking problem. Bob
does not worry about his body, even though he’s a little heavy. Bob
has never been in therapy. Bob,
also, though, does not have tenure—ha ha ha—and  Bob
cannot cook as well as I can. Bob

never even heard of paella, and if he had, Bob
would not have changed his facial expression at all. Bob
is just so boring, and what I can’t understand, Bob—
yes I’m talking to you again, is why you, Bob,
could be more desirable than me. Granted, Bob,
you’re more stable, you’re older, more mature maybe but Bob . . .

(Months later, on the Bob-front: My former girlfriend finally married Bob.
Of Bob, she says, “No one has taken me higher or lower than Bob.”
Me? On a dark and stormy sea of Bob-thoughts, desperately, I bob.)

The first thing we notice about this sestina is that it uses only one end word: Bob. What’s more, ‘Bob’ is used as a proper noun in all instances except for the very last ‘bob’, where it’s used as a verb.

I looked up the word ‘bob’ in the dictionary and discovered it has many meanings as a common noun, some very obscure. A different sestina might have played on the various meanings of ‘bob’; it might have been a sestina with a bobcat or a haircut. But no, it’s always ‘Bob.’ Bob the new boyfriend.

In my introductory essay I said that not all sestinas have to be ‘obsessive’ but this one is. It’s also a send-up of the sestina form—a parody of the form’s obsessiveness.

It’s also very funny. The emphatic placement of ‘Bob’ at the end of each line creates a scornful, mocking voice.

does not talk about himself excessively to girlfriends. Bob
does not have a drinking problem. Bob
does not worry about his body, even though he’s a little heavy.

The ‘Bob-this/Bob-that’ litany is a spin on the ‘I do this, I do that’ type of poem associated with Frank O’Hara, and has O’Hara’s casualness.

I have read Winter’s poem many times since its first appearance in Ploughshares fifteen years ago. I have used it as one of my examples whenever I have taught the sestina form. And, inevitably, it was an influence when I wrote my own sestina. It was also an influence on A.E. Stallings, whose ‘Sestina: Like’ is prefaced by this note: ‘With a nod to Jonah Winter.’

Winter has another sestina in The Incredible Sestina Anthology that is also very clever and funny, ‘Sestina: A Cowboy’s Diary’. Some of my other favourite sestinas in the anthology are Alfred Corn’s ‘Pound-Eliot Sestina,’ Dana Gioia’s ‘My Confessional Sestina’ (in which the speaker confesses his dislike of poetry workshop sestinas), Jason Schneiderman’s ‘Buffy Sestina’ and a sestina by CAMPUS poet, Paula Bohince, ‘Allegory of a Leopard.’

Although the poets represented in The Incredible Sestina Anthology are almost exclusively American (Auden being the only exception I could find, but there may have been more), it is an entertaining and varied anthology, a love letter to the form.

In the style of Best American Poetry, each sestina in the anthology includes a note from the author describing how their sestina came about. I will conclude with this excerpt from Winter’s note on ‘Sestina: Bob’:

I had been writing mainly incomprehensible graduate school garbage. I can’t remember how I came up with the idea for writing a sestina with only one end-word. It just ‘came to me’…! I had been recently dumped by a woman who was then dating a man named Bob. […] When your life has turned into a nightmare…, laugh! Also, I think the idea of mocking a ridiculous poetic form really appealed to me—and continues to appeal to me. As we know, with the sestina form, there is just so much comic potential. But… that’s not a very funny sentence, is it?