It’s perhaps a sad indictment of the way in which history is recorded that many potential readers of this, Bergin’s second collection, might not have heard of the lamentable story of Karl Marx’s youngest daughter Eleanor (1855-1898). The Tragic Death of Eleanor Marx seems to step into the breach and breathe new, memorable ways into writing the underexplored past.

Eleanor Marx was a socialist activist but she was also, like Bergin, a literary translator and first person to translate Madame Bovary into English, later committing suicide by cyanide poisoning (in emulation of Bovary’s own death) after learning that her partner of nearly 15 years had secretly married his mistress. This plays into one of the central themes of the collection – how layers of narrative from real and imagined lives interweave into, in Bergin’s case, sometimes playfully or darkly intertextual poems.

In ‘The True Story of Eleanor Marx in Ten Parts’ we are told ‘Nearly all of this is true’ and most powerfully, in ‘Lorraine’ we are given the deeply troubling thought that reality as we understand it might be the sum of our own self-delusions and imaginations. Meeting an old childhood friend, the speaker remarks:

When we met again

she said to me:

do you ever wonder

if all our memories of childhood

are just our childhood dreams.

The number 43 recurs throughout the collection, as it was the age of Eleanor Marx at her death, an example of how Bergin variously takes from ‘real life’ and mythologizes it, or at least raises it to significance.

The epigraph of the book comes from Marianne Moore and upholds that ‘illusion’ is more precise than ‘precision’. As such Bergin gives us the facts and figures of the examined – or unexamined life in Marx’s case – and goes beyond them to find her own artistic truth. To quote from ‘The Sad Tale of Hansel and Gretel’: ‘He listened to the instructions / But not in context’ or ‘Bachmann’s Warbler’: ‘Who says the gesture of authenticity / is also an aesthetic gesture?’. That each story may have core factual elements that are immutable but the story is retold in a certain contexts in which it should be read or else it might fall into obscurity the way Eleanor Marx’s story did. This perhaps explains why some of Bergin’s strongest poems here are ones that approach timeless fairytales from new perspectives, such as ‘Faithful Henry’:

Faithful Henry looked in the mirror a third time.

Do you have any faith in yourself, Henry? he asked himself again.

He felt a third iron band breaking from around his heart.

But why are all those iron bands breaking, Henry?

his wife called from their bed.

Because I feel so happy, he replied.

Faithful Henry stared at himself in the glass.

No, he said very quietly, you don’t.

The tension between artifice and reality is particularly strong here. Bergin’s poems bring two phrases immediately to mind, one by the Aberdeenshire poet Flora Garry that ‘happiness writes no poetry’ and one by the novelist James Robertson from a recent lecture, that we should ‘Trust the story. But do not trust the storyteller’. The teller of these poems is a fluid and at times mysterious entity, but one that clearly feels and suffers and is haunted, like poets before her – such as Thomas the Rhymer who was given the rather cursed gift of truth – by the idea that poetry is always a form of aesthetic deception, or beautiful lie. (And I seem to remember a line in Dante’s Inferno about the poem having been written by a ‘convict’.)

In ‘Answer to a Questionnaire’ we are told that the poet is essentially a thief, hungry for ideas and inspiration to turn into poems:

From the fat, tight fists of babies

I steal ideas; I steal similes

and these I exchange for butter

The baby was a good little baby.

It opened its plump little fist,

and I stole from it:

This morning I pawned it all

for some butter and some bread.

We are left in no doubt that poetry is the sustenance of the speaker’s life.

The poems in The Tragic Death of Eleanor Marx are neither facile nor easily arrived at, and their dualistic imagery suggests an inner struggle for harmony that is not achieved. And that is precisely where the poetry lies. In ‘Poem in Which I Am Samson and Also Delilah’ the speaker becomes both characters: ‘My right hand grasps the scissors. / My left hand twists them loose’. This duality also manifests itself as defamiliarisation in ‘Mask’ where the children who are being shown how to make masks are delighted to be both ‘themselves and strangers’ when they wear these masks. There is almost a note of guilt in ‘Expensive Sweetheart’ where real life experience (of a lover being treated badly) is being transmuted into a poem, and the speaker is aware of the moral dilemma, to be creating art at the same time as living, desperately rifling through any last scrap of a broken-down relationship for a shred of inspiration:

and use what I threw out.

I bring it back into the house and use it –

that’s how broke you made me.

Other poems read like case studies of similar lives lived in devotion to art or poetry. This is the case in ‘Renting Emily Dickinson’s Bedroom By the Hour’, where the speaker seeks a ‘different kind of pain / If I can get it once / I won’t come back again’. The idea of this sacred space fallen into capitalist hands and being rented out by the hour is a startling one, but one that firmly belongs to the broken or defective society Bergin conjures in her poems. In ‘In Memory of My Lack of Feelings’ society is compared to a boiler on which the pilot light has gone out: ‘nothing: / nothing has changed’.

By comparison with Bergin’s first book, The Tragic Death of Eleanor Marx is much more conceptually ambitious and narratively cohesive, focusing on themes of translation, theatre and story-telling. Bergin sees the intertexts running through lives and literatures and she brings them together in vital and memorable ways, most explicitly in poems such as ‘The Giving Away of Emma Bovary by Several Hands’ Bergin collates the same translated sentence from the novel by several hands, showing us how we can have the same source text in front of us, but come to different conclusions. By doing so she touches on what I think is one of the most profound aspects of poetry, that is, the fear that no matter how much the poet strives passionately to do otherwise, their work is firstly a quotation of something that has come before and, more disturbingly or excitingly, a heightened and deeply aesthetic form of rhetoric, or to use Marianne Moore’s word, ‘illusion’. 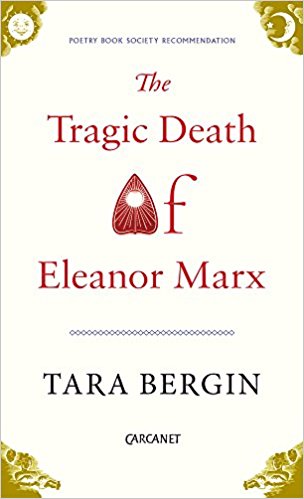 You can buy The Tragic Death of Eleanor Marx by Tara Bergin from the Carcanet website.