Prose poems have been in season for a while now, but Cheryl Follon’s Santiago (Bloodaxe) has the potential to sweep away fatigue. The collection, Follon’s third, is entirely made up of brief prose pieces; the results are engaging and, frequently, very funny.

Prose poetry is not without its pitfalls. For the writer, the risk of falling into the gap between the prose and poetry remains high. For the reader, the novelty soon wears off. But Follon’s poems work with the possibilities of the form, rather than against it, allowing her to push the form, and reason, to its limits.

Here is ‘New York’ in its entirety:

by bit – like snapping the tiny pieces of a massive jigsaw

puzzle together, but doing it all with the lights out; or

getting dressed at a Salvation Army junk stall, also in the

dark, and it all turning out, in the end, immaculate.

Prose poems, especially brief ones, can create a real sense of pace: with no line breaks, they only stop moving when they want to. In Santiago the poems are rarely more than eight or nine lines long. In ‘New York’ the pace is further emphasised by the way in which Follon piles metaphors on top of one another in quick succession, with each image itself then splitting in two. The reader is still thinking about the massive jigsaw puzzle when they are told the lights are out and they can’t see it, by which time they are already at the junk stall, which, it turns out, is in the dark too.

This acceleration, in which one image overwhelms another, is a reflection of the essential quality of metaphor itself. Clive Scott, in Malcolm Bradbury and James McFarlane’s Modernism, describes how the prose poem registers ‘nothing more than the impulse to make poetry, the emergence of raw poetic material.’  There is something of this ‘pre-poetic’ impulse in Follon’s subject-matter, which seems to be everything.

More particularly, every thing. Santiago is atomistic. Each poem focuses on something different: objects, states of mind, elements, places, food, punctuation. Even the title (the capital of Chile, or the Spanish pilgrimage town, or any number of Latin American cities?) bears no obvious relation to anything else in the collection except the eponymous final poem, and perhaps a few other vignettes about cities. But perhaps that’s enough.

One theme, travel, does keep returning (Follon was shortlisted for the Shiva Naipaul Memorial Prize for travel writing in 2012). In ‘Istanbul’ she draws out the way in which travel writing and the imagination are tangled up together:

I thought Istanbul was all cat meat, flies and hair oil; it

was fake gold watches and street children shaking their

fists and selling pens. I got there and saw the Blue Mosque

with a handful of seagulls coasting over it at five a.m.

story, and that makes the cats and flies and hair oil, the

watches and the children with their pens like something

in a fairy story too.

The city is compared to a fairy tale, at once a comment on the unreliability of the traveller’s eye and, at the same time, a description in and of itself. The tone here is matter of fact, as if taken straight out of a notebook. You could almost imagine that the mirroring of the children’s fists and ‘handful of seagulls’ is accidental.

Elsewhere, Follon’s voice is so conversational that it sometimes jars, although this may be the point. Fillers such as ‘so’, ‘just’ and ‘well’ crop up much more often than they do in ordinary speech. But the use of prose-like tone and vocabulary is an interesting way of adjusting to the form. Too much ornamental language in a prose poem is stultifying, without line breaks to let the air in. Follon never lets the poems congeal.

Lucretius himself wasn’t a gloomy or austere man: one of his aims in writing his poem was to stop people worrying about God and death. But Follon’s insertion of the word ‘delight’ to the fictitious title is telling, and born out in the poems. This is ‘Moth’:

The mystery and brilliance of the moth is down to its

recipe, or a recipe. The wacky palette of earth… Browns,

jug of wine because it reminded him of his mother, or a

large black velvet hat because it reminded him of his father

– pure moth. The tones and papers, and oils, too.

This is silly, and a lot of fun (delightful, even). Earthy colours are not ‘wacky’. The Dutch master Vermeer who, like the poem itself, takes arbitrary pleasure from his subjects, has been dropped in half-way through, without any of the dull deference you often find in ekphrastic poems. There is something oddly amusing about the large black velvet hat, and the proximity of ‘jug’ and ‘velvet’. The reference to the texture of paint and paintings is added almost as an afterthought. The relatively plain language allows Follon to force in what would otherwise be far too many images.

Prose poems, as a form, bear no particular definition. Clive Scott (again) describes the history of the prose poem as ‘the history of inquiry into the form and of avoidance of an answer’. But all prose poems, if they are the representation of raw impulses, nevertheless share one crucial limit: they end.

By the end of many of Follon’s poems, the effect is like coming up after being under water too long. In ‘New York’ the abrupt, unexpected ending is made possible by both the speed of the prose itself and the density of the metaphor. The jigsaw, costume and city all come together with a snap on the word ‘immaculate’. In ‘Memories’, by contrast, the poem ends because the metaphor has lost confidence in its ability to describe its subject:

They come out at night, when it’s warm. Once everyone

has gone, even the guy who creeps around the park in the

leather poncho. They make noises? Maybe. Someone who

up against a wall and said she saw them, but it’s unlikely.

The collection ends in the only way it could have done, with the eponymous poem. The first line of feels like the end of a journey:

Mama said, let’s move to Santiago, and we did.

But then, ‘Mama’ suggests a memory from childhood and the abruptness of ‘and we did’, though satisfying formally, is unsettlingly arbitrary. Santiago isn’t a collection that allows for conclusions, or speculations on where the poet might go next. They are restless poems. Follon’s previous two collections All Your Talk and Dirty Looks were restless too. In Santiago the poems’ uneasy energy is in creative tension with the discipline of the form, like a match box trapped shut with elastic bands, but with something wriggling inside it. 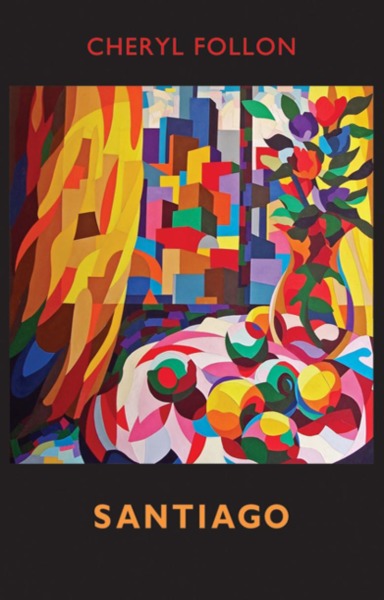