Home » Blog » Review: ‘Who Is Mary Sue?’ by Sophie Collins

I admit, I experienced intense feelings of estrangement and disruptedness during my first reading of Who Is Mary Sue? (Faber).  A kind of physical, alienating panic took hold and I struggled with a sense of being constantly dislodged from my usual reading habits and processes. The allusive, allegorical mode is realised through a very quiet approach to voice – the tones and registers in Who Is Mary Sue? are extraordinarily understated. But this quiet diction belies the fabular effects which accrue across the book as a whole.

The village is always on fire.
Men stay away from the kitchens,
take up in outhouses with concrete floors,
while the women – soot in their hair –
initiate the flames into their small routines.

‘Reality’ and ‘imagination’ are treated with the same sense of suspended disbelief, and the book’s refusal to distinguish between ‘real’ and ‘imaginary’ spaces yields a third, less readily identifiable space of truth-making. This third space is kind of anteroom or paraspace, in which fragments of text reflect light from multiple sources.

Numerous versions of ‘woman’ attend the fragments – wives, writers, dream-selves, characters from literature – and ‘identity’ circles around an endlessly moveable ‘I.’ In this way the ‘I’ of literature is staged as a series of borrowed selves, never quite settling, never quite revealing a ‘true’ or ‘authentic’ ‘identity.’ The writing ‘I’ performs these selves as contagious, unsettled events and the effect is such that ‘I’ has no centre.

Everyone agreed the white lie was beautiful. She’d presented it to him in the kind of box that looked expensive in and of itself. Of course, he thought it was a feather plucked from the tail of a piebald peacock, because that’s what he’d been told. All the same, he kept it permanently out of sight. He couldn’t say why. But it stayed there, beautifully.

As ‘Autobiography’ demonstrates, many of these texts speak around or gesture towards the ‘thing’ itself by way of objects, situations and the relations of those involved. Rather than existing for itself each poem eschews the grandeur of individual utterance, allowing attachments of ‘meaning’ to slide across the surfaces of repeated words and motifs.

I forget which one I am
Sometimes I wake up believing I am her
she is me […]
One name can mean too much
the other not nearly enough
The details make a difference.

Each line bears a lot of weight very lightly; and while the diction might at first feel flatfooted, Collins’ refusal of embellishment allows small glimpses of parable to float serenely, almost invisibly to the surface. The ‘I’ of the poem lacks agency and autonomy, and ‘identity’ is held hostage by nomenclature. The poem seems to ask: what constitutes the ‘I’ I search for, and where is it to be found, if not ‘here’?

Readerly interpretation of women’s texts is one of the book’s major themes. How are women invented by others? How do women invent themselves? And how is women’s writing invented as a category? Each fragment, each poem, each snippet of reportage repeats the question: where is the ‘I’ which speaks and how does one locate it?

In the section titled ‘Who Is Mary Sue?’ Collins interrogates the concept of a ‘Mary Sue’ – who is “said to be difficult to identify with, poorly constructed, without depth” and “associated with narcissism and/or wish fulfilment.” Collins quotes a number of writers, each of whom refutes the presumption that women lack the ability to achieve literary artifice. Collins writes:

a woman who tries to invent in literature will fail, whereas a woman who succeeds in writing is believed to have done so to the extent that she has been able to accurately portray the details of her own life.

Here – as elsewhere in the book – Collins deftly illustrates how ‘autobiographical writing’ is a term commonly used to both undermine and discredit literature written by women. The observation that readers and critics are, in fact, afraid of women’s facility to dissemble is made with astonishing power, while the bitter irony that women’s lives are often centred on precisely their ability to dissemble successfully is usefully held up to the light and examined.

In ‘A Whistle in the Gloom’ Collins relays the tale of Dominique Aury, whose sadomasochistic narrative Story of O was published pseudonymously in France in the nineteen-forties. When Aury was ‘outed’ as the book’s author and subsequently interviewed, Collins says Aury says:

‘I saw, between what I thought myself to be and what I was relating and thought I was making up, both a distance so radical and a kinship so profound that I was incapable of recognising myself in it. […] I no doubt accepted my life with such patience (or passivity, or weakness) only because I was so certain of being able to find whenever I wanted that other obscure life that is life’s consolation.’

Aury’s description of finding in writing ‘that other obscure life that is life’s consolation’ feels very apt. But Who Is Mary Sue? does not exactly console. It is too restless, too searching for that.

Collins’ rejection, for example, of a single mode or register constantly disrupts and challenges the reading process. The reader is therefore continually forced to examine and interrogate their own interpretive instincts, baggage and all. The effect is disorientating, like following Ariadne’s thread through a labyrinth of mirrors. Indeed, the book’s insistence on interrupting the reading process through a variety of formal devices – space and silence, movement between dreamscape, fan fiction, quotation and reportage, appropriation and adaptation of other writers’ work and refusal of horizontal narratives – both vitalises and destabilises the power of each isolated text.

Unhooking the ‘I’ of literature from the diminishing returns of ‘autobiography’ is not new, but Collins dares to ask what constitutes a ‘literary’ project and further, what constitutes ‘I’ within the discourse of female literature. What, as readers, do we expect literature to give us? And why must authorship always be gendered when women write? 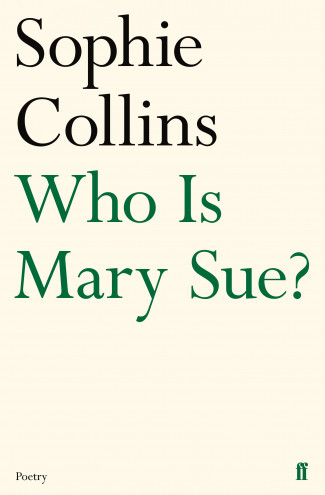 You can find out more about Who Is Mary Sue? from Faber and Faber.

Blurred Background by Rinet It Australia. This image has been cropped and a filter used. Licence.