Tom French’s fourth collection, The Way to Work, continues to explore the territory he has been making his own since his astonishing 2001 debut, Touching the Bones. The usual French hallmarks – seriousness, sincerity, family, the past, rural Ireland – are very much present and correct.

The Way to Work is a generous, wide-ranging collection, but a sequence of short lyrics about a local swimming pool, resonant with memories of childhood and family, runs through it. ‘Lockers’ begins like this:

Sometimes a small child will step into one

and ask his grandfather to close it on him;

then that child will crouch down inside and listen

to the dark without making a sound

and, outside, to the movements of men

getting ready to enter the world of men again.

The highlight of this sequence, ‘Lesson,’ a wonderful poem about French’s mother, deserves quoting in full. It is a worthy companion piece to ‘Night Drive,’ from Touching the Bones, one of the most brilliant poems about the relationship between a son and a mother I know. ‘Lesson’ sustains the surrealist vein French has mined successfully before, in poems (such as the wonderful ‘Policewomen Arresting Death in a Field of Genetically Modified Wheat,’ from his second collection, The Fire Step), opening out from a stunning opening line to be a moving and grounded meditation on his mother and on mortality:

Now that she is dead she is learning to swim.

We come for the early bird and exchange

greetings as I pass on my laps and sneak

looks underwater at my mother moving,

up into her silver Speedo cap.

Eavesdropping on her moving, I feel,

breathless with the pride I feel for her.

The main thing is to breathe, her teacher

is saying to her, ‘As long as you keep

breathing, Mary, you can swim forever.’

There is so much which is lovely here: the under-reaction in the opening stanza to such an astonishing event, the son-as-spy suggested by ‘sneak’ and ‘eavesdropping,’ the gentle comedy of some of the concrete description in the second stanza. Was there ever a stronger use of the word ‘Speedo’ in the English language? From there, we take off into such piercing and real emotional territory, the shock of how ‘I feel…like her father,’ and that wonderfully resonant but grounded concluding snatch of speech. This is a poem to be grateful for.

The Way to Work is also commanded by many short lyrics, poems of 12-14 lines, and frequently much shorter. Here is ‘A Gift’ in its entirety:

We gave away more than a garden fork and sleán

when we gave away his garden fork and sleán.

And, beginning a sequence of short elegies near the end of the book, here is the four-line poem, ‘Tubbernavine’:

Because it is harder to say goodbye than to go

your suitcase is resting on the window sill

as you leave Tubbernavine by the window

While the seriousness and lyricism of these poems lend them weight, their brevity makes it difficult for them to be as successful or moving as complete poems compared to some of French’s other work. What they do achieve is to whet the appetite for the longer poems in the collection, which is where French’s power can drive through and take full effect.

Among The Way to Work’s longer poems, of particular note is the final poem, ‘1916,’ which is about the relationship between the Easter Rising and the generation of 2016, and our tendency to commodify and respond superficially to history. At its heart is a strikingly original idea – poet-as-automated-phone-answering-machine – which, in lesser hands, could have been crass but, in French’s, becomes a wonderful tool to channel sarcasm, rage and vitriol about the way we respond to important aspects of history:

1916 is currently unable to come to the phone.

Please listen to the following options and select one.

If you are livid, incandescent, or apoplectic with rage,

please press 1 now. If you would like to be measured

for an authentic Volunteer uniform and take part

to what is going on, please press 2 now.

As we cycle through the various options the 1916 switchboard gives us – ‘If you would like to watch a selection of Star Wars characters / deliver the line ‘a sustained engagement with our cultural heritage…If you would like / to recite the Proclamation of the Republic in the style / of Marlon Brando in The Godfather’ – it becomes clear that this is a significant poem, its rage and poise giving it a tone which is at times not so far removed from the great achievement of ‘Pity the Bastards’:

If you are elderly, sick, a child, unexpectedly pregnant, dying,

addicted, hopeless, harmless, homeless, or in any way

in need of assistance, God help you now.

It should be clear by now that The Way to Work is a wide-ranging collection, offering us everything from the familial to the political, the vignette to the sequence, the sincere to the satirical, the couplet to the showpiece. The question for a writer like French of course is, given his range and past achievements, what does he do next? There are very few writers who get more and more astonishing book by book – French’s Gallery label-mate Alan Gillis is a striking example of someone who does – and for those of us who adored Touching the Bones (the sort of book you want to sew into your shirt and walk around wearing next to your heart) one question which we might ask is: does The Way to Work gives us the Tom French we want? What it does give us is a new book by the Tom French we’ve got, and I for one am hugely grateful to live in a world which has these poems in it. 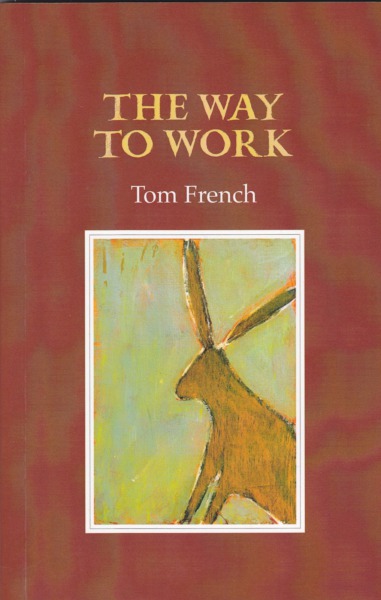 You can order The Way to Work by Tom French from the Gallery Press website.