Waitress in Fall is a career-spanning collection of Kristín Ómarsdóttir’s work, comprising 30 years’ worth of poems, selected and translated by Vala Thorodds and published by Carcanet & Partus.

These poems by Kristín†, taken from her seven collections and presented chronologically, follow the likes of Selima Hill and Eileen Myles in conveying the quieted desires, harms and contradictions of subjectivity that occur within domestic spaces. Opening Waitress in Fall is like entering a soft warm home that is not as it seems; a home where hospitality is contingent, where myriad critters send their regards from each room, where love echoes in the walls and seems to belong to someone else — but who? Throughout, Kristín’s voice is held tender and small as the flame of a blackout candle, often imploring or playful, threatening to catch at the moment of shock or astonishment.

At the heart of the collection’s title poem, ‘Waitress in Fall’, there is an undecidable event: ‘whether she murdered, was murdered / doesn’t matter’. The details of this event and its perpetration are parenthesised — ‘she wipes the blood from her face / (the sword)’ — and the reader is invited to make her own judgement as to the poem’s ambiguous portrayal of violence. This shiftiness persists across the collections: there is a silence, you might say an originary trauma, that eludes at ordinary levels of access. As Kristín writes in ‘Lover X’: ‘Silence inside, silence outside’. Silence suffuses, the lines are stitched carefully thin across white space. Each slender poem takes up only just enough room, but that’s not to say Kristín is afraid to spill.

She sometimes starts with a logic, an object, an event, and unfolds from that. The poems are a sort of cross-stitch corolla, haloing the silence within. What I mean to say is, Kristín is not interested in a stable subject or stable presence. The way she knits scenes with surrealism forces the reader to bury herself into them, picking stitches the way the crisp speaker of ‘scissors’ reads instructions to ‘cut’ and ‘sew’ pieces of numerous bodies together, seemingly to ‘open possibilities in communication’, ‘grow together not apart’. The potential grotesque of such rendering enables a commodious sense of expanding identity, offered in a text without closure, a poem that ends without punctuation: ‘no end’

For a sense of this emphasis on stitching, it’s worth quoting in full Kristín’s poem ‘Morning Gift’, taken from her 1998 collection, Close Your Eyes and Think of Me:

The socks are here.

The socks are here.
I bring them to you with the red dress.

Presented alongside poems about other domestic pleasures, gifts and wishes (including a stove, a lemon breast, woollen heart and watermelon), we might see ‘Morning Gift’ as a ritual of sorts: staging the event of poetic observation through anaphora and repetition, providing a meta-commentary on the act of trying to write poems that comfort and contain, poems as practical and soft as socks, poems you walk with. Of course, the socks could be a red herring, a random artefact in the off-kilter economy of lyric longing — I think of Crispin Best’s poem, ‘My God’, which concludes: ‘my god these yellow socks / i love them’. But they are beautiful, insistent objects, records of oxymoronic process (blaze/blasé), the outcome of labour and stitching.

If Kristín is explicit about her contrariness, writing with threads both taut and slack, stretched and snapped, it is because she wants to reveal the way language both loosens and warms, holds its world. In ‘War and Peace’, she writes of a mother who ‘adorns her sorrow with a thin handkerchief’, ‘woven in a way not dissimilar to the way in which the / spider crochets her livelihood’. Slyly, the speaker concludes, ‘This is how I want to wound the language’. Punning (at least in this English translation) on the traumatic tailoring of ‘wound’, Kristín hints at her process as one of ravelling and tearing, embracing dark corners of life where spiders hide. With her close attention to details of mise en scène, she invites us to look hard at reality and consider the textual spaces where, as Roland Barthes puts it, ‘the garment gapes’ in the act of writing and reading.

Flickering between perspectives and subjectivities, the poems across Waitress in Fall often tell stories which invite their reader to ‘listen’ into their gaps. The effect of parentheses in poems such as ‘Protein’ and ‘The Fatalistic Poem’ feel like little insistent asides, delivered straight to the reader’s ear. Earlier poems such as ‘Garden in a Metropolis’ are rich with movement and lust, hailing a lover to the close space of the speaker’s ‘dripping wet / silence’. Alongside the push and pull rhythms of gustatory erotics, insouciantly balancing pleasure and disgust (‘My mouth is a mussel. / My cunt tastes like a prawn’), Kristín stages the points in desire where language is replaced by implicit action: ‘You speak / and I’. In ‘domestic peace’ and ‘Three Poetesses’, phantasmagoric psychodramas about children licking milk from trees and a ‘man dressed in a pirate sweater’ are presented without flourish. We take for granted the sincerity of these dreamworlds as spaces that exist within our everyday present; Kristín invites direct analysis through folktale, parable or allegory at the reader’s peril. Doors open and close, the perimeters are demarcated: ‘no one enters this place without permission’. Spaces of domesticity and hospitality are sites of secrecy, intimacy, half-remembered presence, potential violence; their time weighs so heavy that ‘the clocks’ literally ‘strike your thighs’. There is a murmuring of generational trauma, legacies of labour, that stirs between selves in the act of empathy and opening: ‘you stand up / take hold of her’; ‘from here on out / all roads are open to you’  (‘waitress at an old restaurant’).

Reading these poems, exploring Kristín’s curious house, my position veers between that of the voyeur and a subject invested. I’m reminded of Chelsea Minnis’ line from Bad Bad (2007) about ‘what is poetry’: ‘a remote electronic claw picking up a stuffed bunny rabbit’. As the book progresses into more recent work, Kristín’s voice grows ever more elliptical, suspending choice details (‘glittering orbs hang in the air’, ‘the human stench of the shadow’) in a space of increasingly jagged, indented line-breaks. If her speaker is Minnis’ claw, then I trust in the spectacle of its motions towards discovery, hungry for the coveted object we might call Poem. Often the outcome is unexpected, as in ‘the colours in my doll’s house’, where disturbingly we realise the speaker is almost a synecdochal extension of the doll’s house itself. Closing on ‘an unfamiliar human leads me from the room’, there’s a sense that the shadowy figure might be the poet herself, or some other authority whose intentions are unclear. I can’t help but feel equally and uncomfortably ‘led’ away by Kristín’s voice, its eerily serene precision of register.

The title Waitress in Fall, in its English translation, implies a feminine subject at some point of transition, whether that be fall the season or fall the motion. (The Icelandic word refers to the season, and is later translated as ‘autumn’). Although many of Kristín’s poems occur in present tense, expressing a sense of emergence, there is also a sweetness of wistful latency to each event described. In ‘ode’, we begin not with the apostrophised subject but with the weariness of the speaker’s own organs for sight, themselves made object: ‘the muscles got tired of holding up / the eyeball’. Amid flutters of girlish laughter, the speaker notes, ‘time took me by surprise’. The pleasure of Waitress in Fall, as a compendium of seven collections, is that it affords the reader a glimpse of the poet in ludic dialogue with the many selves of her life, with the luminous world that never fails to speak back, even if in a typically coy and cryptic manner. It’s appropriate, then, that Thorodds selected ‘Laughter’ as the collection’s final poem,  which ends with the lines:

I lie down on the ground

and laugh with the sky 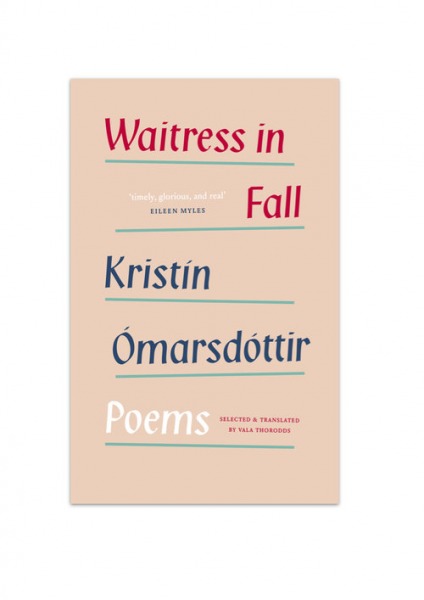 Find out more about Waitress in Fall  from Partus or Carcanet.

† Icelanders use a patronymic / matronymic naming system and are formally referred to by their first name.

‘loom‘ by sethoscope. This image has been cropped and filtered. Licence.