Home » Blog » Review: ‘Venus as a Bear’ by Vahni Capildeo

My favourite Capildeo moment (that I’ve come across in print) is in a TLS ‘20 questions’ interview from December of last year when in response to ‘Jacques Derrida or Judith Butler?’, the Douglas Caster Cultural Fellow in Poetry at Leeds University came back with ‘Ursula LeGuin. And David Bowie.’

What appeals to me most in this tiny exchange is Capildeo’s mind at work. I can practically see how the question is instantly probed, deconstructed, and outside-the-box answers await. I was reminded of those moments in examination halls all over the world when a smart alec student writes ‘love’ on a physics test to the question ‘what is the strongest force on Earth?’.

In Venus as a Bear, Capildeo evades the literal, exploits the grammatical, and lands on the no-less-true lateral. The swerve from godhead to ursine, the melt of sand to glass, the tick of then to now, the seam between this place and the next – these transitions are phenomena themselves, of course – and we are all familiar with them – but Capildeo’s art is to render these transitions in language (perhaps the most protean substance of them all):

padded on patted on turded on welcome mat name

There’s nothing wrong with a good cat poem, or in this instance, two good cat poems, as you will discover on pages 22 and 23 of the Carcanet edition. In ‘Catifesto’, the perspective is exterior to the subject, until a kind of metamorphosis takes place at the line ‘I am my own cat’. Here, the ‘I’ animalizes, finds ‘bipeds’ foreign, and purrs with a ‘sound like no other’. In the facing poem – ‘They (May Forget (Their Names (If Let Out)))’ – the language IS the perspective – grammar is burnt away, and the poet can experiment with their imagination. What is the world to a cat? What slinky, run-on, impressionistic syntax could express it? I’d like to suggest that it’s not wordplay in this poem (that would be all too human), but rather an evolutionary approach to words. They’re ‘will wild default reset’ in themselves, logos-as-little-domesticated-animals – friendly, familiar, but also prone to stray, wander, and even breed (floorpet/fleapit: they get hard to tell apart after a while). If we don’t keep them close, they might even forget their own names, and not come back when we call.

It must be difficult for Capildeo, sometimes. The internal polis of accents, discourses, vocabularies, jargons, languages, and politics comes across in a number of poems in this book, but most notably in my favourite: ‘Two Foreign’. ‘[T]hese words have class issues;  / is it she’d rase or e-race / unnatural disasters?’ rings true in the UK (and perhaps even more if you don’t have a ‘British’ accent). Like floorpet/fleapit, the poet delights again in placement and proximity:

port and porch; born with cattle

or with a caul, see

Lateral understandings swell in the space between farm and form, port and porch. The foreigner’s lament haunts a line like ‘forlorner for longer’, and when the swelling gets to be too much, words themselves start to rupture into new soundscapes where the cross-cultural harmonics of making sense itself can find space on the page.

Exquisite placement marks this book. I’ve mentioned the recto/verso arrangement of the cat poems, and the same technique happens again on pp 88-89. ‘Charlotte Street’ and ‘& When Desire for Air not Piped through Filters Picks up in your Urgent Legs, Remember’. I’ll start on the left hand page.

this is not to say

is an obvious reference to the unavoidably famous ‘This is Just to Say’ by the American imagist. The negative phrasing in Capildeo overturns WCW, and the poem goes on to overturn itself:

this is not to say

i’ve said that she

The line breaks in this moment are supplying and undercutting messages simultaneously. The second line, out of context, looks declarative – she’s like a fish. The poem understands this, and corrects us immediately, but the arrangement of the words in the next three lines don’t entirely dispense with the idea altogether. I mean, if we think that the poem has compared her to a fish, then, hasn’t the comparison actually been made?

Now, take a look at the opposite page. In memory of ‘Juliet Tam, disappeared 1985, Arima, Trinidad’, we are presented with a terrible loss, punctuated by a concluding line that seems to crystallize much of Venus as a Bear’s technical and affective weave: ‘just just so; Juliet ju-‘

This infinitely sharp line break echoes the work in ‘Charlotte Street’, amplifies it. Both are stories of patriarchal menace in different degrees, and the break/unfinishment of ‘& When Desire…’ is part of the message of the previous poem. Here, and often in this book, the poems reflect and mutually reinforce one another. Where Williams inaugurated a new measure for his poetry (the ‘variable foot’), I want to credit Capildeo for creating a ‘political foot’ – the impact of these poems is being created at the precise moment where language and form intersect, and become one another.

This is what it means to read Venus as a Bear: what seems separate and discrete starts to fuse and melt together like Victorian glass, full of fascinating imperfections, imps in reflection, deflecting our gaze to things so much more rich, varied, and interesting than they may appear. 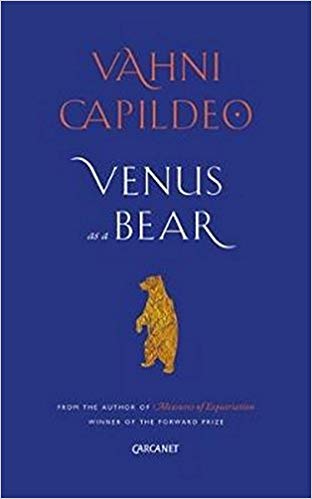 You can buy Venus as a Bear by Vahni Capildeo from the Carcanet website.