I’m delighted to be able to begin this book review with the following sentence: Absolutely central to the emotional, conceptual and aesthetic positions of Richard Osmond’s Useful Verses (Picador) is the figure of the mushroom.

That might seem hard to believe, but it’s testament to Osmond’s strength as a writer that he’s capable, in the space of one book, of creating, exploring and toying with an original and effective poetic symbol. But okay, alright, let me explain.

In the book’s epigraph, taken from the 1597 The Herball or Generall Historie of Plantes, mushrooms are described as ‘strange and newefangled meates’. Later on, in the poem ‘Manna’, they’re referred to as ‘ghost meat’. The sense that mushrooms are a kind of ersatz meat, a pale imitation of some more-real thing, accumulates together with other references towards the sense that mushrooms bear to meat the same relationship that words bear to things. Words – and therefore poems, the very wordiest words – are just the ghosts of the things to which they refer. The sense pervades the book that words and language are failed materiality, and Osmond’s complex antagonism towards the failing actuality of his chosen media (as a poet but also, as we learn from his author’s bio, a ‘wild-food forager, searching for […] fungi’) underpins the majority of these poems.

The project of Useful Verses then, more than anything else, lies in dissecting the toolkit poetry has for affecting us. It feels that toolkit – primarily represented here as metaphor – as a deceit, and a deceit which the book’s narrators have been burned by before. It’s there in the way poetic metre and prosody is handled throughout, for example: Osmond tends to write with either a studied phonic blankness, extending his sentences beyond their ability to sustain any kind of poetic music, or in caricature of jangling poetic ballad-metre, like this:

Cow parsley is of crochet made

and hemlock is of lace

but a dead man won’t know wool from silk

as it’s pulled across his face.

But the book’s restless picking at the corners of poetry’s artifice is responsible for both its highest and its lowest points. I’ll skate over the low points first, because this is a fantastic book, and it’d be misrepresentative to dwell. But it does have a few poems which place their clever intellectual agenda before their responsibilities as poetry. ‘A Game of Golf’ consists in a series of excuses to create the strings of letters needed to spell ‘busty’, ‘London’ and ‘escorts’, like this:

And I got new clubs, coated with

Teflon – don’t ask me what that achieves.

Hungover? I’ll have my assistant grab us Tylenol.

Sandra, would you go grab us Tylenol or whatever…

But for every dud in the book, there are a dozen poems working really hard to build something out of their mushroomy text, to use the foregrounding of poetry and metaphor’s duplicitous ghostliness to build something thought-provoking.

Thought-provoking or, at its best, deeply emotionally involving. In the poem ‘Alas, that very day, the King of the Elephants had eaten a bad mushroom.’, the narrator recounts his, as a child, reading a Barbar book, and having to place his hand over the disturbing image of Barbar lying poisoned by mushrooms. Later, the poem turns to the death of the narrator’s father, ‘in a unique / or memorably horrifying pose.’ Then, on the next page, the poem ends like this:

(Here, as we turn the page, the childish hand

of metaphor is lifted accidentally

from the true image of a once-strong man

dying of carcinoma of the lungs.

Damn. The king dying at the start of the poem is shown to be standing metaphorically for the image of the narrator’s dying father – the ‘childish hand’ is a metaphor for metaphor. The killing thing, though, is that the ‘hand / of metaphor’ is lifted here accidentally. Suddenly the narrator’s obsession with metaphor throughout the book is reframed as a thoroughgoing determination to occlude the ‘true image’ of an unbearable loss. The poem terminates itself with an instruction not to look – it can’t go on, its subject matter unendurable.

There isn’t quite space here to write about the brilliance of the counter-current set going here, where it’s the mushrooms – ghost-meat, language – which have poisoned Barbar. Or how describing an image as ‘true’ paradoxically undermines its status as true-thing, just like when Elizabeth Bishop describes a town as ‘literal’. Or the way the narrator’s father’s pose is unique or memorably horrifying. Why ‘or’? A true situation truly perceived doesn’t admit disjunction. And so on.

This, then, is the way in which Osmond excels – his elaborate intellectual attack on poetry’s modes of dissimulation and deceit is made to express the need we have of that dissimulation and deceit as a crucial shield against the slings and shots of existential pain on the one hand, and cloying sentimental manipulation on the other. The book’s title, which had formerly seemed an ironic joke, comes suddenly into focus.

In another high-point, ‘Love Song, 31st July’ is built around the

online that the winged of every ant nest

in Britain take off on the same bright

This says less about ants than it does

about the state of media in which we place

The poem moves from there through a discussion of social-media algorithms, confirmation bias, the way that ‘Myth moves in step with commerce’, commodity futures, and so on. Typically, Osmond finds interesting things to say, and finds clever and compelling relationships between these things. But the picture gets increasingly tangled with these observations, the field confused by the buzzing static of information, until the final stanza, which…

I’m actually not going to quote because – and this is how good it is – I don’t want to spoil it for you. When I read it for the first time, sitting in a cafe, I genuinely punched the air and let out a little shout of happiness. So I won’t say what happens, but it has that same effect of enacting the opposition between convoluted poetic lyricising/prolixity and the sudden, piercing intrusion of reality. And again, it’s only the foregrounding of metaphor’s synthetic connection that allows this reality to be felt as pure, as – dare I say it – as natural.

There are dozens of poems in the book which deserve essay-length explorations. Useful Verses is continuously intellectually fascinating, even while its committed attack on poetic convention denies it the values traditionally associated with poetry. It’s the best first book of poetry I’ve read this year, and it’s not even very good at being poetry. 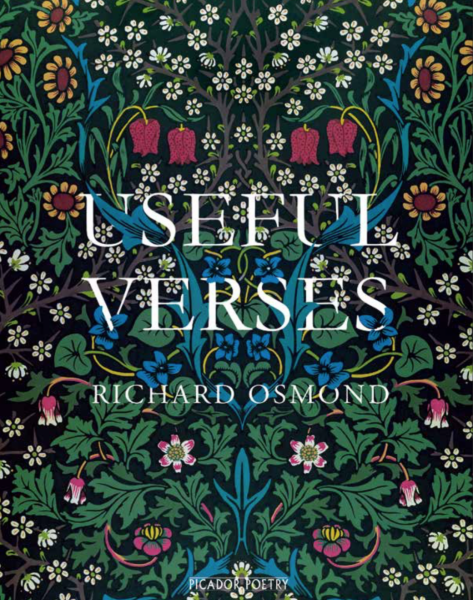 You can buy Useful Verses from the Picador website.