The most impressive thing about Zaffar Kunial’s debut collection, Us, might be its willingness not to impress; to leave as slight an impression as possible.

The book’s first epigraph (of two) comes from Khalil Gibran: ‘Half of what I say is meaningless; but I say it / so that the other half may reach you’ – lines famously quoted by John Lennon in ‘Julia’, a song to his mother. Julia is also the name of Kunial’s mother, to whose memory Us is dedicated. No allusion is incidental, and this sense of accumulated detail intricately woven together only increases throughout the collection (one poem, appropriately, is called ‘Jute’).

In ‘Spider Trees, Pakistan’, Kunial tells the reader to ‘think of holding-spells catching up with time / the way snow floods the sky in slow suspension’. I assume that ‘holding-spells’ refers (primarily) to breath-holding spells, which occur when a small child exhales and stops breathing, often to the point of losing consciousness – a frightening but generally harmless condition. On the surface, Kunial’s poems are less like incantations – Robert Graves ‘spell[ing] away the overhanging night’ – than quiet exhalations of breath. Far from being puffed up with vatic self-importance, they’re only too aware that half of what they say is meaningless.

In ‘Spider Trees’ Kunial notes the ‘stretch’ required – imaginative and geographic – to connect an image of cobwebbed trees (seen on the National Geographic website) to ‘English mists’, Miss Havisham’s ‘withered veil’, a line of John Donne’s, and Einstein’s hair. This ability to conjure up a train of disparate-but-right-feeling images is one of Kunial’s real gifts (‘And Farther Again’ displays it to heartbreaking effect), and brings to mind Paul Muldoon’s ‘Something Else’ (‘a length of chain, which made me think / of something else, then something else again’). The mind’s eliminative faculties unplugged, the world seems to glow in interconnected possibility. For Kunial, this association game also serves a specific purpose: it mimics his split affinities to Pakistan, the country of his father’s birth, and to his mother’s Anglo-Scottish heritage. The poems that result stretch to (and hold) this mixed background in a kind of ‘lacework tension’ (his phrase).

Another of Kunial’s gifts is his capacity for speaking clearly about confusion. His first published poem, ‘Hill Speak’, won third prize in the 2011 National Poetry Competition while he was still writing cards for Hallmark. In it, Kunial travels back to Pakistan where, he says, there is ‘no dictionary for my father’s language’. Just as he’s trying to work out the name of the dialect his father would have spoken, he gets the ‘runaround’ from a local taxi driver. Soon it’s not clear what he’s ‘stumbling’ on. The moment, he writes, at which

or, thank God, even getting to

my point, I can’t put into words

Maybe the ‘point’ is that the right words aren’t enough, or can’t function like a map. These are poems which, in their twisty syntax and broken subclauses, excel at making language feel like a (confusing) physical journey.

In ‘Self Portrait as Bottom’ Kunial pokes fun at the ‘language of numbers’ – which is also the language of poetry (if ‘numbers’ refers to metre). He has a DNA test and discovers, among other things, that 3% of him is from Finland/Northwest Russia and 1% Italy/Greece. On his father’s side, 48% of him is from Asia South and 2% Asia West/Caucasus. In that 2% he sees his parents’ ancestors ‘almost’ meeting (‘almost’ is a key word for Kunial – see ‘Ys’), and it leaves him with an ambivalent feeling of ‘abysmal underneathness / or usness’. This gets to the heart of the collection. As in the title poem, where ‘us’ marks both ‘one fate’ shared and something ‘unsure’ or ‘far-fetched’, it suggests an ambition ‘too wide for words’ – wordless. The trend for having your genetic ancestry unearthed, for example, should show how much we have in common; instead, it risks providing a new pseudo-scientific language for the same old racism, only emphasising difference.

There are poems with other pronouns as their titles – like ‘I’ and ‘You’ – which also deal with the ‘unfixed’ nature of identity. Through them, perhaps Kunial makes implicit argument about the lyric. A relationship (‘us’) might be cast in doubt, but a poem’s ‘I’ and ‘you’ will usually exist in stable relation to one another. In ‘Self Portrait as Bottom’, though, Kunial looks into a ‘U- / shaped test tube’ (that line break emphasising the pun) and sees only confusion: something ‘part, / or passing, or past.’ His idea of lyric is obsessed with capturing this state: the point at which the unfixed stage-scenery of ‘I’ and ‘you’ give way to an ‘abysmal underneathness’, a hellish sense of not being in control of language – or worse, of being trapped under it and drowning (to use one of Us’s watery conceits).

In the collection’s second poem, ‘The Word’, the poet’s father poignantly places a definite article ‘between enjoy and life’. Kunial is brilliant at these small, telling moments, exploring the right–wrongness of syntax, spinning and stretching out words, or rephrasing and rehearsing them. One poem, ‘Stamping Grounds’, appears in two different guises in the collection and each benefits from being read and re-read alongside the other.

As Kunial draws in allusions, he draws out shades of equivocation. A recurrent feature of Us, in fact, is its deployment of allusion. There are explicit references – either through epigraphs or incorporated into the body of a poem – to Ishiguro, Herbert, Austen, Dalrymple, Rumi, Jabir, Rushdie, MacDiarmid, Dickens, and Nick Drake. Allusion comes to feel like a way of performing elegy, of holding grief. As Kunial grows in confidence, I wonder if these allusions will fall away. Whatever he writes, I can’t imagine it will lack for clarity, heart and honest confusion. 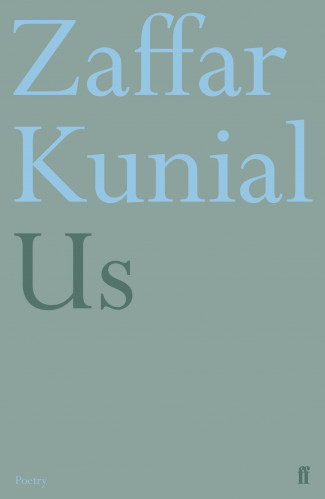 You can find out more about Us from Faber & Faber.