Home » Blog » Review: ‘The Gaelic Garden of the Dead’ by MacGillivray

Each new MacGillivray collection should be welcomed for its far-out linguistic verve, spiky music and intellectual dynamism. There are few poets writing today as utterly sui generis in their style – like poets of the British Poetry Revival (and I’m thinking particularly of Barry MacSweeney and his Book of Demons) all we can do as readers is surrender ourselves to the aesthetic they have conjured up, and MacGillivray is no exception. Such poetry is at loggerheads with the cool, rational and reasoned tones of reviewers who try to tackle it.

‘MacGillivray’ is the ‘Highland’ cognomen of the writer and artist Kirsten Norrie, and her works are acts of not only personal, but national mythology, fabulation and invention, and her three poetry collections so far have set their sights firmly on Scotland and its history, be it imaginary, diasporic, literary or literal. The Last Wolf of Scotland (2013) tried to unite the Wild West of 1860s North America with the mists of Scottish Highland history and literature, such as Fingal’s Ossian (a reportedly ancient Gaelic text ‘found’ by James MacPherson, but actually written by him). In The Nine of Diamonds: Surroial Mordantless (2016) the focus was on the eternally embattled Jacobite cause and the carnage of Culloden. Here, in The Gaelic Garden of the Dead, there are essentially two interwoven strands of Scottish history present across three complementary books: the state of the Gaelic language and the poetry of Mary, Queen of Scots presented as thirty-five Petrarchan sonnets, each representing the steps she descended at Fotheringhay to the platform of her execution. Such topics, and the fact that MacGillivray is a pseudonym might suggest to the reader something akin to the work of William Sharp / Fiona MacLeod but this is a poetry that has little time for the haars of the Celtic Twilight and the Kailyard:

Walking to the heartland of the Gaelic alphabet
where spirit multitudes sleep rough
among the bales of slaughtered wheat,
I drank my lover’s blood.

Spirtle of fire! Spirtle of blood!
I vanquish bloods at the weeping of bloods!

This extract comes from the first book in the collection: ‘The Gaelic Garden of the Dead’. This is an alphabet of different species of trees, all of which have a special magical or folkloric significance in the identity of the Gaelic language in Scotland. Each tree is given its platform on which to speak, perform, confess or testify. One only has to think of the opening quatrain of Sorley MacLean’s great poem ‘Hallaig’ to see the foregrounding of trees in its eldritch personification of them as those lost or dead to the Clearances:

There’s a board nailed across the window
I looked through to see the west
And my love is a birch forever
By Hallaig Stream, at her tryst

Between Inver and Milk Hollow,
somewhere around Baile-chuirn,
A flickering birch, a hazel,
A trim, straight sapling rowan.

I am sure that MacLean might well agree with MacGillivray when she claims, in ‘Second Witness: Ash Feòlach’, that ‘The history of vision / Is the history of ghost’. There is a curious double-edgedness to writing a ‘coronach’ (an elegy) for the dead of Gaelic culture, because the language is already so heavily freighted with associations or assumptions of being in death-throes itself. It is now half a century since Iain Crichton Smith asked in his poem of the same name ‘Shall Gaelic Die?’

The answer is that the language is still in a slow, managed decline, despite the best efforts of teachers and campaigners. All of this, of course, is far from lost on MacGillivray; in fact, it is in this uncanny double world that her voice thrives. In the notes to ‘Eadha – Aspen’, she explains that in old Gaelic tradition, death meant a ‘ceilidh’ and birth a ‘wake’ – that death was to be celebrated and birth, and the ‘life of woe’ it entailed, was to be mourned.

Throughout, the profundity of the scholarship behind this collection cannot be understated. A general reader might read this opening stanza and find it striking but not understand its wider significance:

I open with a mouth of burning coal,
burst from the bitter bone of my skull
so suicides will come down to drink.

In the notes we are told that a traditional cure for epilepsy was a drink of water from the skull of a suicide, and thus MacGillivray here has inverted things in a very, perversely, life-affirmative way. Indeed, in her striking essay on these themes – ‘Retro-Cognition’ – she compares the thanatic, death-in-life tropes of Gaelic poetry with a saying from the Sanskrit: ‘para desa’. This means the ‘highlands [like the desert] in which [Gaelic can] co-walk itself as both living and dead’. Anyone who writes of this arboreal poetry and language as ‘a point of debate [as to] whether poetic trees invoked are felled or seeded when pronounced’ is very much worthy of our attention.

MacGillivray’s engagement with Gaelic and trees in this first book ensures that the poetry she produces is deeply intertextual, highlighting just how pervaded Scottish and Gaelic literature is with references to trees, in the form of Thomas the Rhymer sitting under his Eildon tree or the perennial Scottish song of lament, ‘The Floo’ers o’ the Forest’ written for the dead of the Battle of Flodden. This is much more than merely the metonymic way in which languages are spoken of by linguists as being ‘trees’ with ‘roots’ and ‘branches’; MacGillivray celebrates the uniquely magical relationship between Gaelic life, culture and language and trees. She is additionally aware that she writes lovingly of the language but overwhelmingly in English, the very colonialist language that marginalised and persecuted Gaelic in the first place:

Sediments of smoke, sediments of soot:
with sunken eyes, I lift my chin –
shadow-gatherer lurks at my throat,
old speech-walk tinder, rekindling.

The second book of the collection – ‘A Crisis of a Dream’ – takes us into a much more concrete poetry realm and, since its appeal here is primarily visual, this book acts as something of an interval. This is not to say that this section is filler. It is, in fact, intimately connected to the other books, with references to wood throughout, such as an ‘oak’ staircase — the one which Mary Queen of Scots descends to her execution. Each dream is depicted as an ideogram or sigil, impossible to reproduce here. These sigils are connected to the first book because they could also be seen as ‘clan badge roots’ from Gaelic history, sprigs of certain trees taken into the battlefield to show clan allegiance, or for their putative magical powers. That these are dreams relates strongly to the final book of the collection, ‘In My End is My Beginning’, because the author explains that these books are an attempt, not to mark any historically significant milestone, but:

to exorcise a recurring dream set in St. Giles Cathedral, Edinburgh, in which I seem to approach the event of her execution among terrifying tombs and up a large oak staircase. In the dream I navigate towards the death chamber, mounting the long flight of heavy wooden stairs, but of course never reach the top.

Earlier in this review I mentioned James MacPherson’s (or Fingal’s) Ossian and, although this is not evoked in The Gaelic Garden of the Dead, it is certainly symptomatic of the clash or overlaps between the English and Gaelic literary imaginaries. A genteel eighteenth-century writer, in Augustan English, discovers an ancient epic Gaelic poem and decides to translate and ‘edit’ it before it is unleashed on the reading public. Something like this happens in the first section of this collection – one writer from another era and language making contact with another imagined in time and place – but the final section, ‘In My End is My Beginning’, is presented as a sequence of Petrachan sonnets composed by Mary, Queen of Scots herself as she descended a staircase for her execution. We are told there were thirty-five steps, thus thirty-five sonnets followed by a ‘cut-up’ longer poem (‘The Blade’) made from snippets or ‘masticated pellets’ of these sonnets, chewed over for the fifteen minutes it was said that Mary’s mouth moved after her head was severed. MacGillivray’s notes for this book have all the hallmarks of the eighteenth and early nineteenth-century vogue for the ‘unreliable’ narrator (not to mention editor), like the recovery of the manuscript from the suicide’s grave in Hogg’s The Private Memoirs & Confessions of a Justified Sinner:

After chawing up the sonnet manuscript, I reconstructed the second sequence from the tattered, masticated pellets, laying them out to dry and allowed them to determine and suggest the form and imagery of ‘The Blade’.

In MacGillivray’s poetry, unreliability, hybridity and fluidity make for exciting bedfellows. Although these sonnets are said to be in the voice of Mary, Queen of Scots, they are simultaneously archaic and contemporary in feel, with words that might strike the reader as anachronistic, like ‘terrorism’ and ‘graffiti’. The aim is to emphasise not the brutality of her demise, but the fact that she was a poet who had studied under the auspices of Pierre de Ronsard. It’s refreshing to encounter a collection which celebrates the ‘Auld Alliance’ between Scotland and France, especially at such a politically fissiparous time. This book is also woven into the collection as a whole with recurring arboreal imagery:

Queene fruits fall, to seed the tree
but when you fell from me, my tree was torn
limb from limb; your knife-spry execution
provided no note to pin to your life
save the recurring blood-stain I will mourn,
cherry red tears pollinate my queene, bee.

This poem is dedicated to Mary’s private secretary, the savagely murdered Rizzio and shows how, even on the cusp of her own death, she is more concerned with others. There is certainly a dignity and nobility to many of these poems that suggests our ongoing morbid interest in the assassinations of heads of state is a deeply prurient one:

My head, sweetmeat, fried in diplomatic hate,
presents a dainty dish – not for lips – but for eyes,
(…)
Putrefied fruit, pared apart; anatomy’s art
will smart and start, knowledge decaying stench
that reveals and swells, amplifies smell, to outsmart
the touch of mind’s eye, in the taste of the scent.
But do not deplore: dogged looks have hit the floor
I hold my head high, preserving their horror.

This closing book of the collection is both cri de coeur and chant du cygne, but like the first section on trees in the Gaelic language and imagination, there is a strong element of necromancy. There is the idea that something long dead is being brought to life once more and it isn’t the gory execution that matters. Mary, Queen of Scots here is not being presented primarily as martyr or victim, but a vivid ‘belle rebelle’. Like in the ‘Gaelic Garden of the Dead’ section, life walks arm-in-arm with death, the old Arcadian idea being that in the midst of the idyll there is also death, but this can also be inverted to mean that at the point of death, life can flourish most forcefully.

MacGillivray’s is a signal voice and style in a poetry scene where many other voices simply prefer to harmonise and blend in. Her work is certainly difficult but like most modernist or even postmodern writers, the aesthetic goal and pleasure is to be found in the process of understanding and coming to terms with what is given to us by the poet and by the interexts and connections this creates. Here, MacGillivray reaps a remarkable yield in The Gaelic Garden of the Dead. 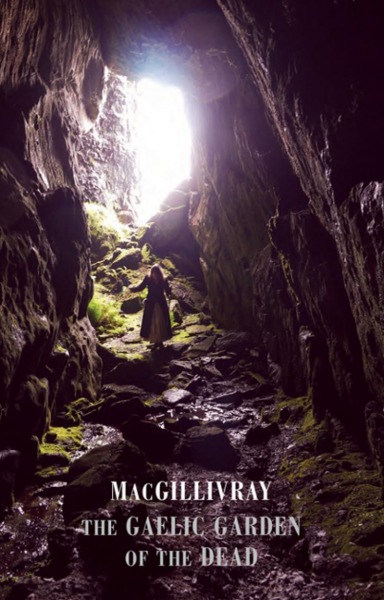 You can find out more about The Gaelic Garden of the Dead from Bloodaxe.

Trees in the burn by John Johnston. This image has been cropped and filtered. Licence.