Epigraphs often function as concise statements of intent, subtly staking out the territory and interests of a collection. Emily Hasler’s The Built Environment (Liverpool University Press) begins with a quote from Nan Shepard’s The Living Mountain acknowledging the wonderful tension between what we know and what we cannot know of the natural world, which for Shepard presents us with an opportunity to see the world renewed.

“It is an experience that grows; undistinguished days add their part, and now and then, unpredictable and unforgettable, come the hours when heaven and earth fall away and one sees a new creation.” The Built Environment strikes out from this position. In playful, intellectual and lyrically absorbing poems about buildings and structures, gender, nature and history, this process of accepting unknowingness is positive, and Hasler’s poems revel in their discoveries.

The longest poem, ‘A Stretch of River’ encapsulates this impulse. Formally, it meanders down and across the page, as a river drawn on a map might, observing the natural and human histories of Mavisbank House on the River North Esk. It has the markings of a found poem, collecting text and factual evidence as it travels along its course:

There was a disaster
at the gunpowder mill,
one furnace blast
triggering the next:
of course, many killed.

DANGEROUS MASONRY.
KEEP OFF. KEEP OUT.
Mavisbank House, built 1723
by William Adam and
the second Baronet
James Clerk of Penicuik.
A squarish construction,
with arms – two pavilions
moving to embrace.
Scottish style roof, but
otherwise impeccable
neo-Palladian taste.
An ornate pediment
with oriel window,
two lesser but matching sisters
on each of the side buildings.

Each stanza observes Mavisbank House and its location from different points in time. Alongside this, a first-person narrative explores the act of doing the same walk every day: “I like the way it offers / no new thoughts, / only the same ones / I had yesterday”. One of these thoughts concerns writing an imaginary letter to a Napoleonic solider who was once imprisoned at a camp in the same location. Like a lyric essay, the poem slowly reveals its intentions through a layering of information and historical facts alongside personal thought and opinion, concluding “all moments / are recurring in some place. / After all, look at the signs”. Hasler likes to work her poems hard, and every line here seems to be loaded with ulterior meanings that merge the movement of water with the flowing passage of time. It is a brilliantly conceived and rewarding psychogeographic poem, blending the historic and the imaginative to renew a sense of place.

Other poems that engage with real places do so through the lens of art and craft, complicating what we might regard as commonplace to re-examine the known. The pastoral quality of ‘The Valley of the Stour with Dedham in the Distance’ is aided by its imagistic rendering of the Constable-like scenes, yet its execution is thoroughly contemporary, eschewing punctuation to confuse linear reading. In this the form is used more actively to escape making a clear conclusion:

Language itself is often Hasler’s subject, exploring as Mary Ruefle put it, the “rack of it”; the torturous yet rewarding difficulty language presents to poets. In ‘On Reading the Meaning of ‘Falchion’ in an Encyclopaedia’, a consideration of the word ‘falchion’ (an old French word for sword), leads to a comparison between words and swords to express the blunt duality of each:

Knowledge is the great unstaunchable wound.
A sword is a sword is a sword. But
what sort? And a word, yes, means nothing by itself,
is simply a point which impales, pins a specimen of reality to the paper
so we might squint and imagine how it once flew.

Attempts to engage with the meaning of words and the rhetorical structures we dress them in can often seem like a poet has turned their scrutiny towards the tools in the shed for want of an idea. Yet Hasler offers something new. ‘Grasmere Lake’ uses the redundancy inherent in the name of the lake as the basis for a poem. It’s worth quoting in full as it demonstrates how Hasler manages, in a way reminiscent of Wisława Szymborska in a poem such as ‘View with a Grain of Sand’, to get round the back of a poem and fiddle around with its parts to give new perspective on the hidden worth of redundant phrases:

A tautology, yes, but then the pedant’s tut
ignores precisely the fact: some things deserve
the slip of double affirmation, being twice named
for good reason – once for the mere width, once
more for those hidden depths. Gasp not
at the reiteration but the escapology,
the trick by which we entangle further to detach,
the reason for the taut surface and infinite trapdoors
which open only once and promptly close fast.

I can’t think of many poets who manage to say something as grand as this by simply engaging with tautology, by putting the problem in the poem. Rather than remaining distant and remote in this scholarly pursuit, Hasler relates this grammatical concept to human experience.

A play with textual device and scholarly tone is also apparent in other poems. ‘Notes: A Monumental Brass’, a subtle and powerful poem, challenges the patriarchal manner in which women are depicted in brass sculptures and artwork, and by extension, in history and now. The poem is organised as a list of footnotes and citations:

3. Having no husbands, and therefore no sons, we remained daughters, sisters.

13. Women’s gowns on late-15th-century brasses generally fall in folds so deep, stable and balanced that they seem to root the women to the ground rather than propel them in one direction or another.

These more cerebral poems sit nicely alongside more allusive work that plays with voice and metaphor to conclusive and inconclusive ends. ‘Sub-architecture’ offers a forgiving look at the country’s ill-thought out and ugly suburbs, blaming not the pebble-dashed homes themselves, but ultimately ourselves who ‘can do better’. By looking at what these places represent to both the environment and to the psyche of those living there, Hasler generates sympathy for the infamous two-up-two-down:

shut their windows, can’t open their doors and aren’t at all like us.
Except, they too must worry about what’s going on inside. The shuffling

of objects, the changing of rooms. And I’m sorry houses, what a price to pay;
to lose your character! All for the love of warmth and/or economy.

This partial personification also takes place in her poem ‘Building’ that begins: “After all, I could find no way to speak of myself / that was not crudely structural.” The combination of witty self-aware address with romantic expression further encapsulates the collection’s reluctance to lay its foundations in any one poetic camp:

Through questioning the constructed and natural things around us, as well as the flexibility of language, this book generates a restless and creative energy that not only revives its subjects, but also renews the sense of what a poem can do and be. Often, the poems left me trapped between wanting more and feeling completely satisfied, and Hasler’s unwillingness to be constrained by any dominant mode or theme affords The Built Environment a unique place in a poetic landscape dominated by heavily themed collections. 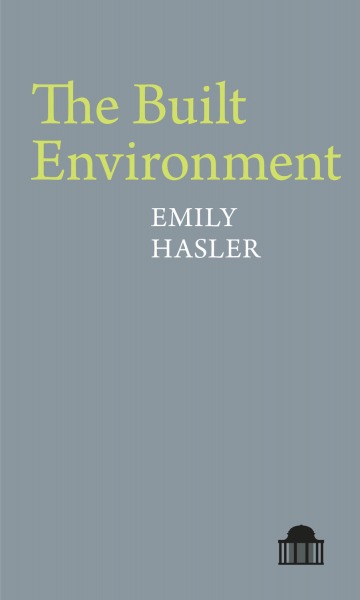 You can buy The Built Environment from Liverpool University Press.

ScuffedBrass2 by virtually_supine. This image has been cropped and filtered. Licence.