in Vanity Fair before breakfast.

To afterwards destroy economy of Greece.

A footnote tells us that the final sentence refers to Christine Lagard, Director of the IMF, describing her morning swim to the French edition of Vanity Fair. Swimming allows Lagard to deal with a stressful job, both a private break from her usual routine and a form of social display; early morning swimming says ‘I am a strong woman with stamina’. And so, we are immediately launched into questions about why someone would swim.

Swims is a collection/poem pre-occupied with why its activity is being undertaken, as it documents twelve wild swims undertaken by Burnett in various types of open water whilst travelling around England and Wales. Each swim has a purpose: it is ‘conceived as an environmental action’. This might make the poem sound worthy and programmatic but what is most compelling is how Burnett allows her writing to change style and swerve as it becomes absorbed in activity. ‘To Swim’ continues by – sometimes overly self-consciously – following the list procedure established at the start, but on turning the page the form is allowed to change as the speaker is overtaken by the chant, and by fear:

in display of bone

to be closer to skeleton and totally fine

what’s the worst that could happen

from the earth but recoverable always

there is something left

Allowing the process to lead and change is analogous to a long swim, where a sense of repetition, extension, exhaustion and being in a dangerous environment leads to altered states of consciousness and an awareness of material resistance (‘there is something left always when words are at/their fullest stretch) ‘To Swim’ ends with an ambiguous toast ‘to not being taken’, rather than a definition, acknowledging the change that has taken place.

The next piece, ‘Preface’ picks up a similar chant, this time used to celebrate the sensation of merger with the environment, ‘To not end where you thought you did/ not with skin but with water/ not with arms but meadow’. As the poem develops this feeling it is challenged by the swimmer coming across a sign – ‘electrified chicken wire to keep the salmon in‘ – and a realisation that the thought of amalgamation can also imply entrapment and the risk of pollution:

In the summer, swim

in traffic, swim in the car

in the river in the summer in the city

The most intriguing pieces go further by making the swims themselves performances and the poems part of the documentation of this process. It is when the experiment appears to be frustrated or fails that the writing is most compelling. ‘The Teign’ starts with these instructions:

2. Enter river with a set of problems.

3. Think about each problem in turn.

4. When no longer thinking about the problem, consider it dissolved.

5. At the point of each dissolution, insert the problem into the survey.

The instructions continue the ambiguity about swimming as a form of escape: when a problem dissolves from the mind it is acted upon, surely this recalls it to mind again. Some of the results of this process are given as a powerful found text piece where elements in bold could be the voice of a disillusioned scientist working on the river survey: ‘Since the experiment may not make any difference a report on each year’s work will be made for general circulation.’ Looked at in combination with the instructions, the pieces in bold also announce a commentary about the efficacy of the instructions and the frustrations of environmentalists. ‘Hampstead Heath’ begins:

2. For each individual raindrop seen or felt, take a name of a Fukishima resident seeking compensation from Tepco.

3. Collect a stone from the bottom of a pond and write a name on it.

4. Write in response to the stone.

5. Return the stone to the water.

What could be a po-faced writing exercise ritual is instantly undermined by a series of events that make following the instructions impossible and act as a comic short story about thwarted ambition due to environmental conditions:

2. Names almost entirely absent from Fukishima reports, mostly a nameless “one woman” who is quoted.

4. As I start to think about the one name I have, a new couple enter the pond. They are loudly in love and I cannot focus.

5. I try again to think about the name as I write it on a twig but a man is talking to me – “Who would have thought the sun would come out?” I write the name on one side of the twig and his words on the other and push it into the water.

At this point the poem switches into free verse as the speaker seems to wake from a nightmare:

In this half-awake-half-asleep state the speaker broods upon the ‘one name I have’.  The speaker and a Fukushima resident are linked by rhyming couplet:

and naming has a residue

as someone named after a Hardy heroine knows

as someone left out of the records shows

Personal concern and global environmental fears are mixed, and there is a powerful use of found text repeating what happens to an anonymised ‘one woman’:

“‘I don’t know what to do,’ one woman told local media”

“one woman had a surprise for all the others”

“one woman was pinned against a wall”

“one woman in Kawasaki fled from Fukushima City”

This is mingled with concern about the individual writer’s position and inheritance as she exclaims ‘my tongue is coated in England’. The merger of experience enabled by anonymity is attractive but a lack of name can also result in powerlessness: ‘there are no names / only one woman.’

‘Hampstead Heath’ contains the most autobiographical material encountered in the text so far, leading into a section where free verse is disrupted by a series of formal pieces grouped under the title ‘Poems for my Father’. A pair of sonnets are used to delicately ‘cradle a body’ and ‘scull a memory’, and this use of form introduces another aspect of swimming: the absorbing attempt to perfect technique, ‘in a solemn breastroke, each lift a small christening’. This obsession can also be seen as a repetition compulsion:

Can you feel my heart. It’s vampiric

how I serve it up to you , each stroke

Between the sonnets, ‘The Voice’ talks back to Thomas Hardy, complicating gender identification: ‘Moon on sea, how you call to me, call to me.’ The moon’s reflection in water replaces Hardy’s ‘Woman most missed’, luring the speaker to swim further. Floating, the speaker looks out at the sky:

There I think I glimpse you, covered in fluid,

Break out the stars in a bright astral birth,

Into dust all through the moving earth.

The you could be the moon, the father, a child. In a final confusion of sky, land, sea and body the memory of the father and the feel of water mingle:

Is it your hand or water underneath

This calling is echoed by the final poem’s coinage of a new word – kelling – that mixes the pleasure in writing with the pleasure of river swimming: ‘the satisfaction of finding a spot deep enough to swim in needs its own word, / signalling a joy at depth, like snorkelling without the snor'”. What seems to be joke word gathers significance through sound repetition, ‘keep kelling through the pages of the street, the lake, the body, // kelling in the middle of the room, the day, the core, keep kelling’. Language is at full spate here. We can see why the collection should be considered one long poem, working in the liminal space of merger and separation that matches both the acts of swimming and memory, marked by the pulse of consonantal music:

there is a glimpse of orange armband and an arm missing

for the first time unaided into wildness, 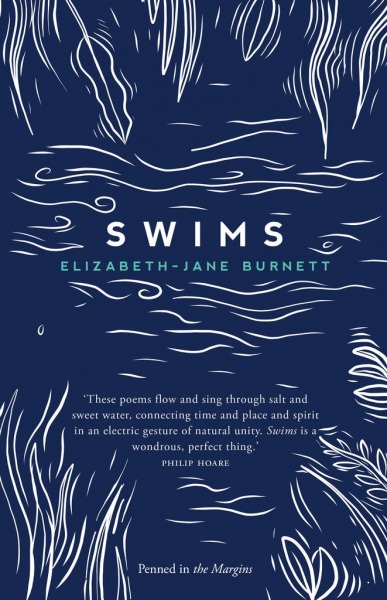 You can buy from Swims by Elizabeth-Jane Burnett from the Penned in the Margins website.