In A Swansea Love Song, Stephen Knight continues his project of seeking to capture on the page, through phonetic spelling, the realities of a spoken Swansea voice, which he began twenty years ago in The Sandfields Baudelaire. The central difference between that pamphlet and this is the step away from dramatic monologue towards a more autobiographical focus.

Knight writes of his experience of growing up and being educated in Swansea, of Swansea’s cityscape, its weather, of ‘A Swansea Matriarch.’ In his own highly distinctive and original style, Knight brings new life to the sort of subjects treated by Laurie Lee in Cider with Rosie or Dylan Thomas in Portrait of the Artist as a Young Dog.

To open A Swansea Love Song is to feel, initially at least, baffled. What on earth does this mean?

Up there in that bedroom is where

I was born – half Welsh, half Aus-

but all the grass out front has gone,

no parking of cars there now,

Once the meaning is understood, this poem, ‘Swansea (Google Street View),’ becomes an interesting and moving poem, an eccentric take on the subject of growing up, as Knight sits at a computer, revisiting the places in which he spent his childhood. Nostalgia and hiraeth are both at play as Knight thinks about childhood play as ‘spy Dumb Ann,’ or Spiderman, then heads on up the hill:

dy drives and all the shops

The problem, of course, is the impenetrability of the verse on the page. The only reason I’m able to access the meaning of this poem is that I saw Knight give a brilliant reading from it, at the Ledbury Poetry Festival recently. He did something I’ve never seen a poet do before, offering the audience photocopies of the poems so they could follow as he read. The result was a brilliantly entertaining reading, but a lot of the comedy was coming from the disparity between the words on the page and what Knight was saying. When readers laugh at these disparities, they are also laughing at their inability to understand the verse without Knight being in the room.

The difficulty of the poems on the page comes not just from the words but also from the lack of punctuation, the confusing approach to capitalisation, and the way line and stanza breaks don’t coincide with an oral pause – indeed, it’s often the case that a word is stretched across a line or stanza break. Who’d have guessed, for example, that ‘olé//Dee whither Zimmer’ would translate as ‘old lady with a Zimmer’ or that ‘unSHAY/MACINI’ would be read as ‘and Seamus Heaney’? The note at the front of A Swansea Love Song, ‘These poems are written in a Swansea accent. It helps to read them aloud’ is, one suspects, at least partly tongue-in-cheek, as it’s certainly inadequate help for the task that awaits the reader. All of this is a shame, as it’s clear from Knight in performance that he wants these poems to be liked, and deservedly so – they are deeply witty and moving poems about revisiting the place where he grew up.

The gains of writing in the style Knight uses here are potentially worth the risks. The poems in the pamphlet are highly original, and the style matches the subject matter well. Here is the ending of ‘Swansea (Google Street View)’:

[got my head kick-

ed in over there,

grew up and fe-

ll in love, left and didn’t look back,

and then forgot and here now,

It’s impossible to hear Knight read this without being moved, without feeling that he’s found the perfect medium for the message. Knight recaptures childhood fully, with a flair that goes beyond Thomas and Lee.

Together with the phonetic spelling, A Swansea Love Song is full of the sort of formal experiments and range that have long been a hallmark of Knight’s work. Here is the opening of ‘Swansea Haiku’:

Eventually, you can get there – and what joy when you do:

Seagull on the prom (or on a pram?)

screeching his head off

‘A Swansea Chorus’ sets new lyrics to ‘Seasons in the Sun,’ while ‘A Swansea Boyhood’ is among poems that employ a strict rhyme scheme, the formality butting up against the phonetic approach to create an amusing tension. Rarely can a boyhood of ‘snooping and prying, chopsing and lying, lobbing bits of bricks’ have been as energetically rendered as this:

And ‘Swansea (Google Street View)’ imitates the form of ‘Fern Hill’, though its confusing epigraph, ‘fur nil,’ and the wobbly relationship between the form here and Thomas’s stanza doesn’t clarify matters.

Ultimately, to read A Swansea Love Song is to return to the problems of meaning and impenetrability. There are, of course, a couple of solutions to this problem. One is simply going to see Knight read, though I’m not sure how many readings he might be giving. Another would have been to print translations alongside the originals in the pamphlet. If this had been done for even one of the poems, it would give the reader a start, and this is a pamphlet that, once the reader has got a start, does allow you to get to meaning with careful re-reading. But by far the best and easiest solution is simply to give readers access with the pamphlet to an audio or film recording of Knight reading the poems. With this, A Swansea Love Song would become a highly enjoyable pamphlet.

As it is, this is deeply important and highly original, but often difficult work. Because of Dream City Cinema, I would follow Knight anywhere, and every new direction he takes is exciting, compelling, ground-breaking. Knowing from having heard him read how brilliant these poems are, one is just desperate for him to open that door a little bit more. 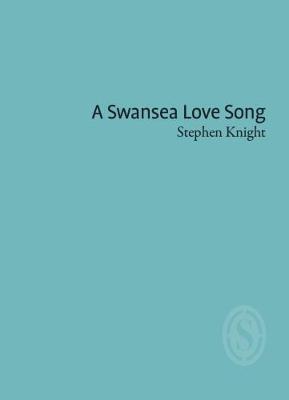 You can buy A Swansea Love Song from The Poetry Business.