‘love other women / collaborate only with them’ writes Helen Charman in ‘Instructions for waking up in the morning’, the first poem of support, support  (Offord Road Books). The pamphlet takes its title from Denise Riley’s ‘Affections Must Not’, and women’s voices – urgent, ebullient, sardonic – are important throughout.

The opening poem acts as an aphorism for the pamphlet, and for life as a woman. Indeed, aphoristic lines appear in multiple poems, and they are seriously meant, but they are also fun – a joyous expression of being a woman: ‘Women and girls rule / my world!’ (‘Prosody daddy’).

I like to think of poems as puzzles, something for the poet to figure out, a problem for the reader to mull over. In opposition to the more direct language of the aphoristic poems, others are the best kind of puzzles: the ones where the answer is unclear, where I can spend hours unpicking the meaning of a line or phrase. Take, for example, this stanza from ‘Census of London Fluids’:

Your heir apparent
interest is just extreme
disrespect masquerading as
its opposite; my eligible resources
are finite. Drink up! Cream-coloured heir
presumptive.

The repetition of ‘heir’ makes it seem like Charman is pushing the reader towards a meaning, but we are ultimately denied clarity: who is the ‘Cream-coloured heir presumptive’? What are the speaker’s ‘eligible resources’?

In ‘Counterfeit money’, Charman’s lines concatenate a series of images and details:

That dimpled child’s just a
flanking vowel, blonde hair and no glimpse of a
homeland, the fat fist slow with pencil lisping out
southeastern.

Here, Charman complicates meaning by turning what are almost concrete images into bizarre, unfixed terms: what does it mean to identify a child as a ‘flanking vowel’? How can a pencil lisp ‘out / southeastern’? This abstract language obscures the sense of the poem to the point where I must concede and hope it is not really meant to have a fixed meaning – perhaps it is word-association, or an attempt to capture a voice. Perhaps I’m not meant to understand at all – and there’s a joy in that, in accepting that I might not, and that Charman has created a language that’s all her own.

The more puzzling poems are also riddles of register, from political and removed to personal and direct. ‘Electioneering’ begins abstractly:

Rendering intimacy impossible, deploy lifeboats (mark
yourself safe). Not listening as such, more waiting to
speak, above all mark yourself…

Charman obscures meaning by looping the phrasing back around, and using Facebook’s ‘mark yourself safe’ feature to expose the slipperiness of the term ‘safe’, especially when safety is denoted through social media.This then poses further questions: how can we feel safe without intimacy? Who is waiting to speak? The registers become more clearly opposed in ‘Difficult’ (a knowing nod, perhaps, to the challenging nature of these poems), which opens again with a formal, almost abstract tone:

Another voice then interrupts assertively:

[…] I want you to find me out at the same
time I want to hear those three little
words: you’re a shit.

Through this assertion, the (second?) speaker disrupts the poem and radically alters its voice with a statement of inadequacy – and of wanting someone else to recognise it. Charman is deft with her bathos: the three little words aren’t a declaration of love, but an almost-humorous declaration of hate, of having discovered the truth behind the façade. This is, I think, a political stance of wanting to see things as they are, even if that reveals a series of fundamental contradictions.

Charman explores this idea throughout the pamphlet, returning to ideas of womanhood through witty and gauche speakers. In seeing how things are, and wanting to show them, Charman’s speakers reveal that they don’t – for all their puzzling language and sophisticated political thoughts – necessarily have a strong handle on their own lives:

How many bathrooms have you
cried in? At parties, or at home?
Even my search engine doesn’t
understand me still

The resonance of this – of being able to have complex thoughts, and thus still feeling overwhelmed by the world – is how the poems shine, how they move from the abstract to the concrete.

In Charman’s puzzle-poems – both for the reader and the speaker – there are battles with thoughts around narratives, specifically narratives for women. In ‘Fidelity interlude (i):’ Charman returns to looping phrases to create a ‘Poem against boyfriends’:

The poem begins with a statement that suggests an unequivocal stance, but as it continues, and the lines repeat themselves, the speaker seems to be convincing herself, or justifying her actions. The façade of self-assurance begins to slip. In ‘The tenancy’, these assertions appear again: ‘My outward / appearance is not that which needs to be subverted’, but is then followed by contradictions:

[…] Fears: domesticity; women; desire. Desires: a house;
a woman; desire. I’d like to moon around a garden barefoot
and rosy, instead I wake with night sweats I dedicate to my
landlord. A house is a kind of ordeal anyway: all that cleaning.

The speaker seems to want and resist domesticity, and an idealised, romanticised version of her feminine self, which is both appealing and repellent. In reality, she is ‘Rosy and barefoot in the dirty city’, and leaves ‘the plates out again’.

Charman’s speakers attempt to resist narratives given to women, ‘ears popping at the pressure’ of trying to move away from that which is expected of them (‘Solstice bug’). In ‘Counterfeit money’, women actively resist the tropes of femininity: ‘molar crushes petal edge and juice leaks, chew / up and spit pink hot-house flowers’ at the same time as being told to ‘Be quiet, be quiet’. This ‘pressure’ suggests that Charman is at once interrogating these narratives and expectations, and also wondering whether all the energy spent trying to resist them is better spent elsewhere. Crucially, this puzzle ends up in ‘an image of a women crashing / intentionally into the flower bed in her own / car’, and so it seems that all the complex thought is futile, and that there is no straightforward answer – only an attempt to destroy femininity in its widely understood forms with a kind of wildness that is full of delight, and an awareness of the awkwardness of being a woman.

Charman’s voice is at its most engaging and impressive when it takes a concrete moment or image and uses it to sardonic, self-effacing ends, as in ‘Till you get sore’ (quoted in full):

So I left the man that I had loved and
took my bag and a taxi across the city
seeking sanctuary. The Skoda radio
was playing the Akon track ‘Smack That’
which I had not heard since 2006. It was
not the ideal time to revisit a classic.

The poem begins with the Hollywood trope of leaving a significant other, and then unravels into culturally specific, gauche and self-deprecating humour.

Perhaps the most pertinent conundrum the speakers and Charman are grappling with is how to come to terms with expectations and reality: of how to be a woman, or feminine, and wanting to disrupt that ideal, of having complex thoughts and robust political motivations, but being prone to embarrassing, unpredictable or destructive behaviour. Importantly, Charman’s pamphlet is a celebration of women and their contradictory, complex nature. Another mantra from the pamphlet, and for life: ‘Speaking / as a woman, it is necessary to be ready / for anything’. 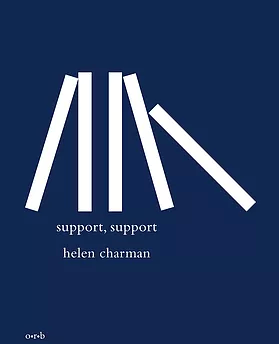 You can find out more about support, support  from Offord Road Books.

Nicholas Nova: Support. This image has been cropped and filtered.