Red in tooth and claw though the setting for many of her poems are, Yvonne Reddick evades any easy categorisation in Spikenard (Smith | Doorstop). Just as she did in its two predecessors, Deerhart and Translating Mountains, Reddick writes a poetry that bucks, rears and darts, but is also defined by the steady and deep-sinking effect of its pronouncements.

She shares with Wyatt an understanding that the richness of the speeding form is only worth that definition through long-preceding stillness, and while it would be no fault to describe the poetry here as forged in a similar manner to that of Oswald or Hughes, it is in the originality of surprise that Reddick is most brilliant – fiercely capable of the unwavering stare and swift stab.

It limits Spikenard to set out its most identifiable themes, but recurring foci dominate this poetry. The wrestling of lust from love is a brilliant constant, proud and obsessive in its concern. Loss of both time and life, and the awareness of the separation inherent in that interplay, also marks poem after poem.

Take this from ‘The Bait’, an acerbic dance of flashback and recurrence:

When he came to my place, I told him no,
but he had to show me his cooking – I’d be impressed.
He’d turn the flame up high: it would take a few hours.
He caught my wrist. His grip was a snare,

he’d had to show me his cock – I’d be impressed –
it felt like a bolt-gun, pressing the base of my spine.
He pinioned my arm, his grip was a snare
and my no was the carved-out tongue of a doe.

It felt like a bolt-gun at the base of my spine –
I wrenched free, burst through the door,
my no a carved-out tongue of a doe.
Damn you, long-gone lover, for not breaking his jaw.

The echoes of Empson’s ‘Aubade’ are not just formal; both poems understand the tricks of memory and the blur so present in disaster. The speaker here shifts between the different stories implied by both rage and despair, but also each different angle, each rephrase and return, is offered as different to its mutated antecedent. It’s a terse but utterly hypnotic poem with no hint of kitsch or comfort in its formal achievement.

That terseness can rage out in ‘furnace-fear’, as Larkin would have it, when holding up the inaccuracies of bad faith and false comfort. Larkin is faced out by the beginning of ‘In Amber’, ‘They’ve been coupled fifty million years: / the pair of midges trapped in Baltic amber’, which combines the cold date stamped in the lab with an easily-recognisable wander into drunk hyperbole (‘fifty million years’), offering the reader both the majesty of survival and that survival’s accidentally ridiculous scale. I haven’t dared to look at ‘An Arundel Tomb’ since reading this, and it’s not as if that poem doesn’t weave the memorial and the unintended together itself, but Reddick’s almost clinical eye (not to be confused with cold, or unfeeling) makes no room for romantic interpretation in the way that Larkin’s poem did.

There’s a clear patience to Reddick that is never cheapened or fatally challenged by her fierceness. ‘The May-Tree’ opens with that cool reflection:

Your embrace was the Shelter Stone
when the ferns began to unscroll their questions.

You planted a may-tree, and said the whitethorn
could not match the bloom in my cheeks.

The slow opening of an ancient scroll is here brought back to earth, but it’s also given gravity by the undone metaphor of the unintended in that second stanza – how quickly our analogies are planted, and how swiftly they cease to serve.

A recurrence in Spikenard is that of the dominant and / or submissive bestial, be it in instinct or action. The opener, ‘Desire Path’, closes:

Oh, I could ride you for miles in one night, unbitted,
without straying an inch from your bed.

Reddick is playful here, funny and warm in the wordplay and hint. But it is not that simple by the time we get to ‘The Lady and the Unicorn’, where the In-Memoriam-dialectic (‘better to have loved and lost…’) is weighing-in:

One morning, she showed me my image
in a glass. White as an icicle, slot-hooved,
the brittle weapon of my horn.

“You’re rare as ivory, she said. “My Will
is a horseman. How he’d love to mount
an unbroken creature like you!

The reference back to ‘Desire Path’ is a matter of the reader’s choice, but I made it because in any book steeped in mourning, the writer is constantly challenged by the IM dialectic and its other side, best expressed by Christina Rossetti: ‘Better by far you should forget and smile / Than that you should remember and be sad’. That choice of sanctuary away from the naked vulnerability of ‘Desire Path’, is particularly hard-won, as we’ve seen in the pages already how quickly the bared can be flipped, as in ‘Of the Flesh’:

I have returned
the blank gaze of a peeled head.

But when I saw the creature’s arms
thrown wide, baring the emptied chest,

its voice of wire
filled my ears.

That night, an air rifle cracked through sleep
by the sett in the woods
and the cry seized my throat –

broke off, severed
as your fingers stoked my nape in the dark.

Evocative of Robin Robertson’s ‘The Flaying of Marsyas’, sure, but better, closer. The resolution later in ‘Tamer and Gyrfalcon’ nimbly sets out the change decided upon:

I won’t stay caged within this box.

You clamp a ring to my scaly thigh
and bind my ankles. Go on, fly!

My feet are scythes. My face an axe.
Pray that when you call, I don’t come back.

If there is growth in Spikenard – and I would contend that there is – it is built from a choice and a separation made by the poet. In that sense of vulnerability faced down, those last lines of ‘Tamer and Gyrfalcon’ (for me) echo Henry’s response to the ‘Paris balls’ in Henry V: ‘we understand him well, / How he comes o’er us with our wilder days, / Not measuring what use we made of them’.

Grief is a risky poetic topic (no, they aren’t all). Like the poetry of illness, the tension can sometimes be so profoundly absent that there is no possibility of the poem moving you. By this I mean that you don’t usually have to go through the process of having to decide which side to come down on – a process the poetry of betrayal, complaint or even love usually prompts in the reader. Nobody doubts the earth-shattering effect and importance of grief, but that does not guarantee an interesting poem. The poet has to be convinced and to convince that they can create something valuable or challenging for others out of impulses and emotions that feel impossibly personal. Reddick has succeeded in doing just that. The pain in these lines from ‘Light, Sweet Crude’ is unendurable:

A two-stroke heart has steely valves and chambers
but frail fuel-lines. He said he’d hike the path
above the falls, but dusk failed to bring him home –
the spring after we burned him, I piled his books
in a rusty petrol-drum, and struck a match. A pyre
for Fire in the Night, Offshore, World Oil, Pioneer.

The freeze at the end of this (preparation made, but the match not put to the pyre) is the stasis of agony, the awareness that ritual removes or transforms the last traces of what is lost. That stasis stretches to the next poem, ‘Muirburn’:

My father weighed a little less than at birth.
I carried him with both hands to the pines
as October brought the burning season.

These words, as steps, are taken by Reddick seemingly with great calm, but with the whole page shaking with the weight of what is borne, and it is this quaking state that bestows upon the close of this poem its wild, wolves-howling release:

A volley of shouts: “Keep the wind at your back!”
My grandmother threshing with a fire-broom,
Dad hacking a firebreak. My stillborn brother, now grown,
sprinting for the hollow where the spring once flowed,
the whole hill flaring in the updraft.

And there: a girl, running for the riverside –
she wore my face: the shade of ash.

I rarely believe that the poetry of grief helps either the poet or the sympathy of the reader, but there is achievement in this poem. Reddick holds the reader in fire and scream alike, and brilliantly communicates what she cannot look away from. This is how to grieve on the page, but this is also how to write: the full exertion of a clear-eyed skill. 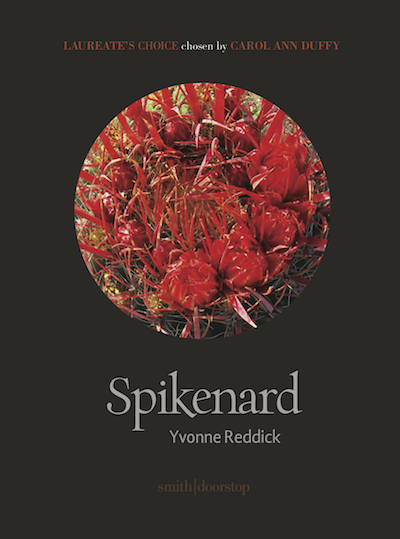 You can find out more about Spikenard from Smith | Doorstop.