Home » Blog » Review: ‘Speak from Here to There’ by Kwame Dawes & John Kinsella

‘We co-exist.’ Speak from Here to There (Peepal Tree Press) begins with this claim, followed by a description:

The York gum bark is stripping itself off,

shiny skin underneath exposed to the sun. Late summer –

summers that won’t end – and it seems to be a statement,

much more than restating a habit, a well-researched fact.

That stripping bark sounds like a metaphor, an image of sloughing off and shiny renewal appropriate to an opening poem. But no, it’s a ‘statement’, says the Australian poet John Kinsella, ‘a well-researched fact.’

Kinsella’s tree isn’t, like Larkin’s trees, ‘something almost being said’, an emblem of underlying decay or hope against hope — though it might be that as well — but a specific York gum bark. Whatever we might project onto it — a certain emotional freight accruing to any natural object placed in a poem — it’s something whose alienness we must contend with, with which we must co-exist.

The book that follows builds up a sort of daily chronicle in verse between Ghanaian-born Jamaican poet Kwame Dawes and Australian poet John Kinsella. Over the course of 125 alternating poems, their correspondence dramatizes their struggle with various forms of co-existing: with themselves and their families, an irreparably damaged ecological system, the legacy of colonial violence, and, of course, the rise of orange-faced ersatz-fascism. Here he is in one of Dawe’s later poems:

so fully formed he trompes the eye.

I have always hated cartoons for the flat

passion of their antics, but oh the colour

These are poems that often induce a sense of incipient historical vertigo, as if they can’t be read in the present but only from some indeterminate point in the (post-apocalyptic, scavenging-for-berries-on-the-side-of-a-crater) future, bearing witness to the horror and stupidity of our present moment. In poem 42, Dawes writes:

Outside, the prairie grass multiplies

and a sharp wind drudges up history. Oh for history’s

sake, the confederates are back in the great plains museum,

with the woven textiles and overdue confession

that northerners enjoyed the softness of cotton

and the pulped currency that build a nation with slaves.

Tonight a Filipino American will stand before that flag

and rant post-colonial verse while the news travels.

The ‘sharp wind drudges up history’. This feels wrong at first—like it should be dredges up, as in brings to the surface or collects—but then implicit in Dawe’s choice of words is a bleaker view of how history happens: ‘drudges’ means toil and servility, useless labour, signifying nothing. Though surrounded by abundant prairie land, where the religious injunction to be fruitful and multiply should ring truest, there is always—like Marvell’s ‘winged chariot hurrying near’—the “sharp wind” at your back. History is not the promise of eventual redemption but a record of those dis-possessions and atrocities that make clear the impossibility of anyone (anywhere) being redeemed.

There’s no date given, but I assume this poem was written not long after the church shooting in Charleston when nine African Americans were killed. Afterwards, a photograph of Dylann Roof, the attacker, was discovered online posing with a handgun and a confederate battle flag. A national debate ensued as to the flag’s enduringly malignant symbolism. Dawes’ poem, rather than explicitly laying out this argument, makes the point that, whatever we decide, we can’t sift out the complexity — the horror — from history: the great plains museum thus holds both ‘woven textiles’ and confederates; northerners also ‘enjoyed the softness of cotton’. He switches into an awkward present tense to convey that the United States was built on — as it continues to ‘build’ on — slavery.

The banal/prophetic claim that ‘Tonight a Filipino American will stand before that flag [Confederate, I assume] / and rant post-colonial verse’ is, to me, beautifully and tragically defiant. There were Filipinos in America decades before the docking of the Mayflower, but through a quirk of colonial history the US ended up taking possession of the Philippines in the late-19th century and brutally suppressing local struggles for independence. The US is composed of migrants, but for the settler mentality this is exactly why migrants are seen as a threat: the lucky descendants of white settlers live in terror of their fathers’ sins being visited upon them. Hence their pre-emptive rage, paranoia, isolationism. That ranting — read, dissenting — Filipino American points to another America: outward-facing, at ease with its multiple, unsifted but co-existing identities.

In the next poem, Kinsella is with his wife Tracy and son Tim:

I take your poem, Kwame, in my head out onto

the land, out on yet another of my endless walks,

out into the possum country of Goomalling, out

to Oak Park where sheoaks on the edge

of the dead dry lake sing in the breeze,

the voices of ancestors who are not mine

‘We live,’ says Kinsella elsewhere, ‘on the boodja of the Noongah people.’ Or, as he specifies earlier, on boodja (land) where three Noongah tribes intersect. This awareness colours his appreciation of possums and trees; they are full of those voices — ‘ancestors who are not mine’ — singing in the breeze between the sheoaks, heard in another poem ‘whispering: theft theft’. The land he loves is not only tainted by ancestral theft but, as he describes elsewhere, the still-ongoing agitation of far-right groups like Reclaim Australia, keen to finish the job their forebears started.

This is Kinsella’s credo (or nego) in response: ‘No belonging’. Belonging implies a sort of claim that can’t be proven, only enforced through drudge and whip. Instead, he says that the self must be insinuated into a place—’insinuated’ suggesting ‘tortuously … indirectly, or by devious methods’ (v. 1.a. OED) and containing the appropriate level of ambivalence. The structure of his poems likewise attempts to resist the path of least resistance that most (especially short) lyrics tread. Poem 43 is no different, ending on a non-sequitur: ‘All of it, all of it the lyric and its utter, utter trashing.’

The lyric form, according to Joyce’s Stephen Dedalus, is one in which ‘the artist presents his image in immediate relation to himself’. But Kinsella and Dawes do their best to present their work as thoroughly mediated, crafted not in relation to themselves—or not only to themselves—but to a wider, darkening social and historical situation. They see through themselves so as to see through others. In Speak From Here to There, with its structure of call-and-response, each utterance is filtered through the other, trashed in order to be recycled.

between us we have two good eyes

or are blind. Blind – always been

a word that’s bothered me cast

as a moral pejorative, when lack

of vision can be stunning or devastating

In Blindness and Insight, Paul de Man argues that readers and critics can ‘grope toward a certain degree of insight only because their method remain[s] oblivious to their perception’. Blindness, in other words, is necessary to insight. What Dawes and Kinsella provide each other with is less a means of achieving perfect insight than of casting light on the other’s blindnesses. Both do literally have eye problems as well. Dawes takes eye drops for his glaucoma and describes ‘the impulse of the body / to close all apertures’. The body politic’s natural impulse when faced with a perceived threat is similarly to close off borders. The overriding message of Speak From Here to There, though, is this: reject the false consolations of belonging; there is no other kind of existence than co-existence. 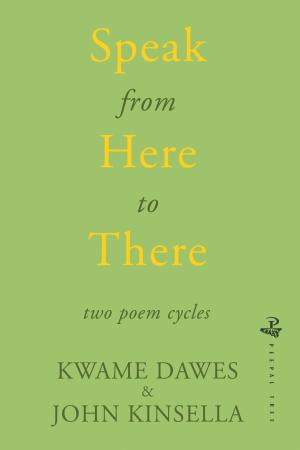 You can order Speak from Here to There by Kwame Dawes & John Kinsella from the Peepal Tree website.