By turns explicit and playful, elegiac and defiant, Richard Scott’s Soho draws on the fiercer traditions of queer poetry without ultimately depending on those who have gone before. The result is a debut not bound by allegiance to some generalised category but liberated by joy and clear execution.

Soho is not necessarily inseparable from London’s Soho. The collection is informed by the psychogeography of the streets, bars and other environs of that part of London, but Scott’s intent is for a full deposition of the blood, fear, passion and love inherent in his life’s full experience, unrestricted by specific surroundings. And all is tinged, if not flooded, with risk. He is aware of the task before him from the first poem, of the progress to be made

In the library where there is not one gay poem,

not even Cavafy eyeing his grappa-sozzled lads – I

in the margin. Ink stains my fingers. Words stretch to

The ‘stains’ are expected, as to a certain extent was Cavafy, yet it is the metamorphic swelling and reinvention of the words stretching to diagrams, ending in the brilliant use of ‘fourgies’ with its phonetic split between the forge and the orgy that innovate and hold the eye. One can easily think of the hedonistic shapeshifts of mid-period Gunn, and I did on first reading this, but Scott’s purpose is neither a reinvention of Ovid nor to draw on an easily-recognisable cipher with which to smuggle queer sex and the gaze (sic) into the library. These transformations are explicit and new, their language unabashed and forceful to the point of staring.

That force is drawn in part from poems concerning younger misadventure and new experience; the intimation and stark unveiling of abuses and the unfamiliar. Yet Scott has little patience with the inferred, as though mindful of the costs of embarrassed, tolerant silence. Indeed in several poems he faces this head-on

he asks if my poems are authentic

do I have any experience in the matter

and by this he means abuse

and by this he means have I been a victim

I tell him the truth he talks to cover my silence

So what was the truth? That’s not the point. ‘Admission’ is in fact a delicate, bashful piece, but here the anger brushes the surface: what is all this ‘truth’, this ‘authentic’ that interrogates the work thus? Coming, as the placing of this poem does, after ‘Childhood’ and ‘Fishmonger’, two pieces that can be read as ‘abuse poems’ if that’s what we’re after, ‘Admission’ is as much about the failings of the reader as the anxieties of poetic transmission. ‘Permissions’ is concerned with the same frustrations, opening with

Here Scott is aware of the expectations of the audience before the reading itself, just as he is aware of the later interrogations of ‘Admission’ that will follow it. Let’s be blunt about this – the expectations laid on a queer writer will involve those of some abuse or trauma, even in 2018, and Scott impressively manages not just frustration and anger at this expectiation, but also pity, understanding and, above all, humour.

Humour and wit primarily inform the central third of Soho, which is made up of Scott’s own take on the love poetry of Verlaine. It’s laughter in the dark, sure, but laughter the same:

even if you fuck me all vanilla in

even if we’re missionary the hairless

backs of my knees against your shoulders

it’s still an act of protest even if I’m

moaning at a respectful volume

There’s an inbuilt pomposity to these insistences that cannot help but raise a smile, but the tenderness in the slowly-building tension of the poem meets with that pomp in the poem’s sign-off (‘we are still dangerous faggots’) and stops the smile just short of fullness. Frustration again, but also the recognition of unavoidable struggle and conflict, as elsewhere

but what they mean is there’ll always be haters

only you’ll be older

you spit in my mouth and I

taste petals was always a

I am the homosexual you

cannot be proud of

The co-opting of that middle-england cover-all for the embarrassing queer, the ‘sensitive boy’ is here given brilliant, sticky life in the embrace that the speaker gives it, just as the join between the ‘understanding’ straight gaze (sic) and the queer who would seem to reject it by the pride-refusal is actually solidified by the line-break that precedes it: literally, ‘I am the homosexual you’.

Throughout Soho, join and entanglement are more interesting to Scott than comparison or correlation. ‘le jardin secret’ speaks of how ‘boys were my vines my / creepers my climbers / tattooing my neck back / & thighs’ and again we find ourselves near Gunn and Ovid. But Scott recognises the joins and strands that hold us to the darker brotherhoods of the present:

When I read how they poured petrol over that man

I see my own death in some outlying federal province.

We are not so different

dirt on my knees, another man’s saliva in my mouth.

The beautiful mirror of that ‘I – I’ almost does the work of the poem for it, stretching to Ginsberg’s ‘I am with you’ (in Howl) in two letters and a dash, as though in a score rather than a poem. It would not be a lesser book that did not recognise that for every brilliant Friday night in Frith Street (or, elsewhere, in ‘Public Toilets in Regent’s Park’) there are men and women being killed in Russia and Syria for those same joys, after all why should a poet ‘have’ to address these matters? But Scott’s tenderness to these most awful acts, that the most wonderful loves cannot help but remind him of, is at times heartbreaking in its gentle yet unwavering attention.

For all the mentions or intimations of Gunn, the poet who Scott reminds of most in Soho is Adam Johnson, whose late poems mix an acceptance of coming death with a quiet joy at the life lived. I particularly felt this when reading the first of the ‘four arias’:

I don’t remember when I lost it my

greenhorn my cherry my

only wedding satin is the

skin of my inside wrist thighs […]

we all bleed when it comes to it

you can sing of the april lily the

but we all bud in muck and shit

Scott’s concerns are of earth and drip, of surge and smear, but with Johnson he shares a wondering which make neither of them apologists nor ranters. In the closing third of Scott’s book, which consists of a Whitman-esque long poem, ‘Oh My Soho!’ (too complete and brilliantly consistent a piece of work for quotation here to do it justice), the poet’s address to environ and experience, even when mourning the homophobic injustices of past and present, is driven primarily with that wonder again. Shock and delight intermingle and reflect in celebrations and memorialisations that brought Johnson to my mind more than once.

It is as a result of this wonder that Soho so brilliantly breaks new ground. Scott and his poetry live in a world that we inhabit, but the sure eye and fierce joy of this book also make it a new world to rejoice in. 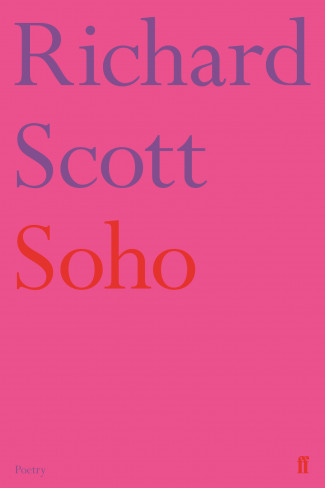 You can find out more about Soho by Richard Scott on the Faber & Faber website.