Karen McCarthy Woolf’s 2013 debut collection An Aviary of Small Birds is a book that has stayed with me for a long, long time. The poems revolve around stillbirth of her son, and manage to capture the furthest corners of grief, anger and heartbreak with an exact but also almost unsentimental pitch that continues to touch me.

If you, like me, were a fan of Aviary and are expecting more of the same? Don’t. McCarthy Woolf’s new collection, Seasonal Disturbances (Carcanet), follows Aviary primarily with regards to broad thematic tone: these new poems also look at the self, at womanhood, at familial relationships and at the ideas around the natural order of life and death. However beyond these, the similarities come to an end.

When describing Seasonal Disturbances, perhaps the first word that comes to mind is a typically unflattering one: strange. Seasonal Disturbances is a strange series of poems. The poems and their vivid imagery do something I don’t think I’ve ever seen before, with natural imagery bursting off every page, and heightened emotions seemingly the only emotions we are ever shown. Reading Woolf’s poems feels like watching an avant-garde disaster movie: small slices of information swirling amongst the fast-moving scenes of what the blurb calls “a backdrop of ecological and emotional disturbance”. Everything – from Woolf’s cut-and-paste ‘coupling’ form, to her scientific references and H.G. Wells-inspired ‘The Science of Life’ poems – comes together to birth a sort of dystopian narrative.

The most central part of the way McCarthy Woolf builds this dystopia is her use of the natural world, a motif that recurs so often it can hardly be called a motif—more, perhaps, a foundation. These are poems built on animals, insects, and birds, on plant life, and rock, and stone, and dirt. We hear of tapeworms, ducklings, locusts and sniffer dogs, of trees and mud and grass. However alongside all this nature is the absence of nature, as well as its destruction and destructive qualities. In ‘Gulls’ the narrator notices “there are no / gulls at the marina”, and in the collections titular poem, ‘Seasonal Disturbances’, one tight stanza ends with “I could see trees blown over, / their roots curling up into the air.” In ‘The Science of Life 492’ we are told:

It is a strange world

no birds nesting or singing in the trees;

no bellowing, roaring or squeaking savage or small;

no caterpillars to eat the leaves; no bees

or butterflies; no creatures that do more than crawl.

Similarly hollyhocks, a flower that appears multiple times in the collection, are constantly ill at ease. In ‘Poem in Which I’m Pleased to Have Opted’, the narrator asks ‘What if I were as efficient as the hollyhocks / that suck all life out of the crack in my concrete terrace, / their tips nudging at the windowsill of the woman upstairs?” The collections opening poem, ‘The Hollyhocks’, is made up of eight variable stanzas that serve as almost an ode to the plant. In the third stanza, the flowers are implored to live:

O wooden boardwalks across the marshes

Grow for me again!

In the other stanzas, the hollyhocks’ name is deconstructed dictionary-style before the plants are too; we learn the flowers are eventually stolen and ‘piled… on to a pyre-like mound’ by a woman who eventually needed to ‘take action’. The absurdity of a detective then investigating “crimes against hollyhocks” isn’t lost—instead, the poem settles into its silliness, with the final stanza describing the detective’s arrival suddenly breaking into prose poetry. A biennial flower, known for its shocking pinks and purples, the Victorians deemed hollyhocks as symbols of both ambition and fertility. This is addressed in one of the poem’s closing lines: “In retrospect she felt this unprovoked attack on their fecundity was a / bad omen and one which was made manifest later down the line.” In a poem that has previously described the woman’s ovaries “pinging like an elastic band,” it appears that by destroying the hollyhocks, the woman has either also destroyed her own fecundity, or  is simply reflecting what she already knows to be true. ‘The thing about the hollyhocks was to what degree was it about the / hollyhocks?” we are asked. The answer might not be obvious, but the question is perhaps all we need.

Amongst the many illusions to nature in the poems, water is perhaps the collection’s most significant image. ‘On the Thames’ sees ‘The houseboat tilts into the water at low tide, / ducklings slip in mud. Nothing is stable / in this limbo summer’. Meanwhile ‘Conversation, with Water’ is “a disrupted zuihitsu” that flows through the book much like the water it idolises, the words floating title-less and scattered across the paper. ‘Jay tells me living on water is hard and expensive’ comes before a thought-experiment that involves quoting Murakami, and ‘The pull of the tide is how certain women / are drawn in and get dragged under’ hangs at the bottom of an otherwise blank page, much like the ‘certain women’ mentioned. McCarthy Woolf begins the final two pages of the poem with “O River I submit to your rhythmic dictatorship and propensity / for ruthless, expansionist acts.” Submission to the rhythm of the water is something the narrator as well the reader is forced into, and much like water, the flow and movement of the poems continue to the last. The collection’s closing line is a relatively straightforward simile, “Rain slashes the window like claws”—these words, pelted at us like rain, are supposed to erode away at us too.

Throughout Seasonal Disturbances, innovative poetic form is something McCarthy Woolf refuses to shy away from. ‘Arts Poetica 101’ and ‘Of Ownership’ are Elizabeth Alexander and Joy Harjo-inspired Golden Shovels respectively. Golden Shovels are Terrance Hayes’ celebratory form for the late Gwendolyn Brooks, where a line from one poem provides the end words for McCarthy Woolf’s new piece, and they provide another layer of fun to a collection where humour is often embraced. ‘Tatler’s People Who Really Matter’ is one such example:

many are astonishingly cosy and nice.

She is not a perfect English Rose,

but he has the loveliest, gorgeous glossy hair.

Imagine how super-clever and super-connected

and affable one must be to have got this far.

Considering they are not all trained, many

are relentlessly upbeat and frighteningly talented.

Boundlessly energetic, they approach each border

as if it were new, even after umpteen impressive attempts.

Mind-blowingly otter-faced, she tells the little ones

everything’s going to be just fine— the lie

flawless as pale skin, some might call it pneumatic.

When they get through it is delightful.

This is a biting piece where the narrator ironically talks of the super-elite; the poem’s title, adverbs and adjectives are courtesy of the magazine’s ‘rich list’ of the same name. The resulting poem’s cleverness rests in this fact, using the magazine’s own words to condemn their idolatry of the mega-rich is perhaps the only way one can.

When it comes to other poetic techniques, ‘Day of the Dead’ makes of simple but effective use of iambic rhythm and masculine rhyme that ‘Mort Dieu’ did in McCarthy Woolf’s last collection:

She’s shut you in

There is no key.

It has no lock.

Now hope that someone

While less of a set technique, couplets are used many times throughout the collection in poems like ‘The Island’ and ‘To Dover from Calais’. Pairings and balance are similarly a thematic device, with pairs of earrings, socks, and Canada geese all appearing in the collection, alongside “Most birds travel in pairs. / Or at least here, one notices most birds when they travel in pairs” from one of the many ‘Conversations, with Water’ sequences. McCarthy Woolf’s new ‘coupling’ style is arguably a step further. In the Notes, we are told couplings are “an interventionist, hybrid form, devised by the author, where a passage of pre-existing prose is lineated and a response line that includes assonance, repetition or rhyme is written underneath to create a new lyric narrative.” They are unsettling poems, with the repletion serving as less of an anchor and more another way to continually disturb the illusion of order. Of the many repetitions in the book, like the many ‘The Science of Life’ poems, none does this more so than ‘Voyage’, a fourteen stanza epic that McCarthy Woolf wrote as writer-in-residence- at the National Maritime Museum.

is the name of the ship

to use as the set

Many Rivers to Cross

was your favourite song

as requested we played it

is the name of the ship

you board at Kingston Harbour

where you had ‘a good job’

as a customs official

Voyage of the Damned

when a thousand Jewish refugees

is a region south of Naples

full of mountains and many rivers

in the language of the ancient tribes

Like the water that so often appears, this repetition serves to unravel a story of migration and movement that we see again in the account of hearing xenophobic jokes in ‘To Dover from Calais’, and the punchline-style joke of ‘The Neighbourhood’, where the apparent unwanted, unassimilating migrants are revealed to be coffee-drinking, gentrifying hipsters. As the title of the collection suggests, tension or disturbance is not merely inevitable, but necessary, seasonal. Repetition shows us this. Disturbances come and go, they push and pull, and like ideas of us and them or the differences between men and women, they appear in the collection to remind us of this.

Seasonal Disturbances might be strange, but it’s also a brilliant selection of poems. Like Woolf’s last collection this has also stayed with me, but for very different reasons; I’m not heartbroken, I’m questioning, and laughing, and not quite knowing why. It’s a collection that teaches you something about human beings as well as yourself—what it won’t do, however, is explain what it has taught you. In one of the book’s watery conversations, we read “River, I sense part of your job is to take our emotional detritus and / wash it out to sea”. In Seasonal Disturbances, McCarthy Woolf takes us to a place and leaves us to sit with this tide, and let the water wash over us. 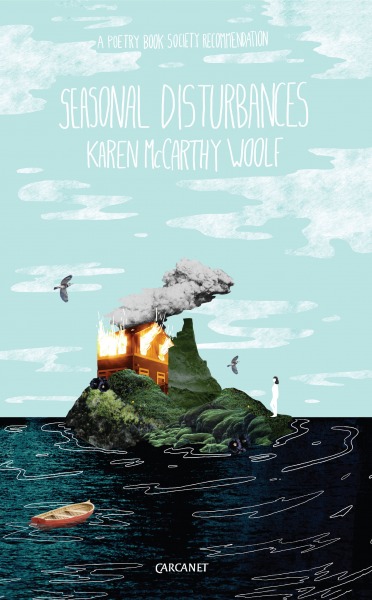 You can buy Seasonal Disturbances from the Carcanet website.