Causality and chaos. These could be our governing gods at present. They are certainly the governing gods in David Clarke’s Scare Stories – a 25 poem sequence in the third person plural set in ‘possible near futures or versions of the present’.

The poems cover horribly recognisable ground: consumerism, refugee crises, despot generals, video-game violence, genocide, corporatism, sex and death. These are neat, short poems that form a coherent whole. But the work is full of contradictions that undermine the slick surfaces. We’re put off-kilter straightaway by an unusual instruction to the reader that fronts the pamphlet:

These poems may be read aloud in any order

As some distinguish between ‘page’ and ‘stage’ poetry, this comes at an interesting angle. These are undoubtedly ‘page’ poems, but we’re being invited to ‘transgress’ and read them aloud. At face value, it’s also inviting us not to read from front to back in the recognised structural way. We’re being invited to choose our own paths from the pathway created for us. Also, to consider how order is constructed. These are central concerns of the book, cleverly conveyed.

There is no Contents page and there are no titles to demark each poem, so if you do ‘read… in any order’ it’s reasonably hard to navigate your way through such similar territory (have I been here before?) Again, this neatly reflects a key theme: a terrible sense of déjà vu.

The first poem in the book begins after a disaster, or perhaps between disasters:

We leave the broken road behind us,

stumble to a giddy ridge.

Resting there, we view the carnage

of a sunken vale. It blinds us

Images of ‘the road’ have many connotations: destinations, byways, man-made constructs. Also Cormac McCarthy’s The Road: a post-apocalyptic tale of survival.  It’s unclear whether the road has been broken by the ‘us’ or some unmentioned or unknown source. The viewpoint is desolate: what’s behind (the road), immediately in front (the ridge), and in the distance (the vale) is broken down, destabilising, depleted. The past, present and future offer no solace.

Clarke is very canny with time. The subject matter isn’t easily classified as present, past, future or alternative reality. It’s unclear whether we’re in post-apocalyptic, pre-apocalyptic or dystopian mode. It comes across as potentially all at the same time. The potential positivity of ‘in any order’ is undercut. These things go around, come around. Nothing is quite so far-fetched that it’s out of the question, somewhere, now.

From the outset Clarke invokes large themes like war and power, vividly brought to life:

His double on the TV sweats,

has no leisure now to regret

his career. Outside the war gets loud.

There’s dark humour in the jauntiness of the rhythm and the rhymes. But much more too. As each poem is made of heavily rhymed quatrains, formally, the work could appear conservative:

We sprawl on leather banquettes – post-truth

Shrugging off the rigmarole

Yet given that the majority of contemporary English-language poetry is in free verse, this is taking a road less travelled. And why indent lines 2 and 3? It draws attention to the form, and adds more pauses (for thought). It makes them look like truncated ballads – the song-like form narrating news by and for the common people.

Clarke is clearly a poet who could maintain subtle Larkin-esque rhymes if he so wished. But he doesn’t. He wants us to notice. He wants us to think about big ideas. Hence the ‘showiness’ of some of the rhymes:

Let us talk again of May,

of suburbs, blossom squalled from boughs.

The chosen name of the month is surely no accident. On page 13 he rhymes ‘us’ with ‘love’. On page 17, ‘chastity’ sets up ‘Schenectady’. It makes me as a reader go back to basics. What is the function of rhyme in poetry? There are many: to set up a recognisable pattern; to build a sense of expectancy or suspense; to create sound gags: to link words and thoughts together to stress their connections or disparity; to make a poem more memorable; to fulfil the reader’s desire for satisfaction when the sounds snap shut. All of these are at play in the pamphlet.

But rhyme is more than just a blueprint for how to construct each poem aurally line-by-line, stanza-by-stanza. When sustained for this length of sequence, the rhyme scheme also works on a larger scale. Note that word ‘scheme’. A system. A plan. A method. For a rhyme to exist, there has to be an inciting sound that’s followed up. There has to be cause and effect. It creates a sense of forward momentum. It tells us there’s an order to how things happen.

What is the best way to respond to the current disorder? With disordered writing? Or by offsetting it against a backdrop of order? By doing the latter, Clarke makes the additional point that order/harmony is possible. It also makes us think about the sense of (false) security on offer in established and maintained schemes. Plus we all know when a rhyming word is there ‘just to make up the numbers’: badly handled rhyme embodies complacency. What appears set and settled has been evidently engineered, and can be deconstructed.

On top of this, the line end becomes supremely important. Will the rhyme be fulfilled or subverted? How well will it be fulfilled? Combined with the forward momentum of the rhythm driving the lines, and Clarke’s frequent use of enjambment, the line end becomes a precipice that lines tumble over creating a sense of free-fall. Words teeter on a knife edge, calling to mind the bleakly appropriate film Apocalypse Now:

The tone throughout the collection is confident and confiding, but this is oddly offset by the unusual use of the third person plural:

We only have the word, a chalk-dust

a dream of deep sun. Along

As students, we’re warned off the all-claiming ‘we’ in poetry. Who are we to speak for others? Or, like the ‘royal we’, are we speaking just for ourselves, as if we were apart from others? It can be patronising – an omniscient narrator condescendingly interpreting others’ actions and reactions. Or an amorphous, unengaged collective comment on the action, like a Greek chorus. Which ‘we’ is narrating the poems in the sequence, and is it consistent?

The first word in the pamphlet, ‘We’ is sustained through ‘our’ and ‘us’ for almost all of the poems. In the first four it shifts from the ‘we’ careering towards extinction, to ‘we’ on a boat not picking up refugees, to an assassin, to online personas. The fifth poem breaks the spell:

The General boasts of his lack

of education. The General never

loosens his tie. The General never

laughs at the jokes he cracks.

In the sixth poem, ‘you’ appear:

unfurl in your high rooms, stages

set in cream and gold, spacious

glass that ripples as evening comes.

It becomes clear we’re in the territory of ‘them’ and ‘us’. ‘You’ is privileged, powerful, in ‘high rooms’, and dishonest (‘stages/set’). ‘We’ is the masses, the men and women in the street, with a distinct focus on the underdog: ‘The dream of every henchman…’ (p25).

The idea that if only the ordinary people or the renegades were put in charge everything would come good is beguiling . That by breaking everything you can start afresh:

The world quakes. We are the knife

pressed to its flabby throat. As old

our health in Stolli. On charcoaled coasts

he plans the world that we’ll remake.

This brings us back to the idea of order. Except this road leads to brokenness too. If you read this poem first, and then the broken road poem, stasis and circularity rise to the surface as themes. Clarke knows there are no easy answers. The final line in the sequence is telling: ‘Everything is happening now.’

What impressed me most about this collection were its delivery mechanisms. Not necessarily ‘what’ is said in the poems, but ‘how’ Clarke chooses to construct and present them. It’s a masterclass in how to embed more questions into the work. Fitting for the highly questionable circumstances we’re currently living in. 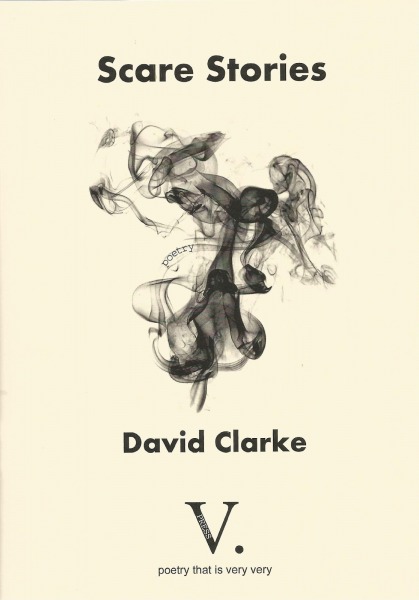 You can buy Scare Stories from V Press.