It’s fitting that the first word in Savage (Clinic) is ‘please’, thus priming the reader for the pamphlet’s themes of vulnerability and need. Indeed, much of Rebecca Tamás’ technique hinges on a kind of self-psychoanalysis, an exploration of the individual’s sacred/profane duality as revealed by ‘love that’s virulent, ugly, nutshell tight, / love that throws out a tender and extravagant brightness, / calling you with torn crying into vision.’

everything is about consent

mostly no one consents to pain

rain ruins that one day of

happiness you had with your uncle

mean that you go to prison

This is one of several instances in which Tamás takes the piss, and you’re inclined to let her: having immediately shared the fact that ‘this is all of my love desperately / finding itself’, she’s earned the right to confess on her own terms. But to what is she confessing? To pushing at the limits of desire, perhaps:

i have stood in front of the sun

when it was really blazing

and i have been properly weak

i have said take me

even though no one heard

Later, in one of the pamphlet’s most neatly-realised moments, she admits that ‘telling is a careful / dance of pleasures’, i.e. that she might be enjoying herself here. Why is it, then, that she ‘can’t tell him about the worm eye, / because to say it out loud would make it real’? Maybe the contradiction is down to self-doubt; or ‘maybe i’m not actually bothered by the logical / summation of things’, as the award-winningly titled ‘Penis Hex’ suggests.

If you’ve ever wondered what it might be like to read Diamanda Galas’ journal, this poem might whet your appetite: full of inscrutable, anarchic statements like ‘to hex a penis off means taking a laugh out for a walk’, it describes a world in which ‘the child-bride comes with you / her big gobstopper eyes and hello kitty backpack / full of dicks’. Taboos aside, the speaker is still trying to work out who she is and what she wants (though this is a purpose poetry should serve only some of the time):

maybe i like it out here in the dark cold wood

with all my bits hanging down and fiery creatures

perching on every surface shaking their claws

maybe i like it with god holding my sweaty wavering hand

Savage‘s second half, entitled ‘Mystics’, presents a welcome shift in perspective while retaining much of the first half’s imagery (‘God is already in your arms and breathing up against your face, / so close it hurts’) as well as its bathos (‘when I was forgiven it felt almost like / bed’). These pieces, framed by cultural and religious visionaries such as Teresa of Avila and Simone Weil, are suitably expansive, though they also find Tamás at her most focused; such are the advantages of putting on masks, perhaps. Here she proves she’s capable of real insight (‘the excess of pain is not pain’), not to mention real poetry:

a map made up of empty white, a pearl that waits,

footsteps on the stairs, the wind screaming

hieroglyphics, the aurora peeling off the sky.

The pamphlet closes, wisely, with ‘Joan of Arc’, which tackles the risk of cliché by allowing itself four full pages to explore its subject. Here, also, the aforementioned sacred/profane duality is put into sharp focus:

I could not be happy about it,

the pain and gorgeous collapse

You are funny to ask if I’m a virgin

because, of course, I fucked myself

Considering Tamás’ taste for the irreverent, one wonders if the ‘coarse angel’s voice’ to which Joan bears ‘absolute witness’ belongs to the poet herself. Further evidence that she might be playing with the fourth wall – a generally reliable way to bring depth to a text – is in the pamphlet’s full-circle denouement, which seems to implore the reader, however uncommitted, to stay the course:

Stay with me tonight please

it is just me

That all said, one can’t help wondering how the poems could be better realised. Too much free verse takes the line for granted, when it’s the line that distinguishes poetry from virtually every other written art (and no, the same can’t be said for song lyrics, which are super-textual). This is not to say that Savage lacks any instances of formal ingenuity (‘there was so much beautiful / potential’ is a manifestly perfect line-break) but they’re few and far between. Meanwhile, the missed opportunities (‘On the volcano I feel the quietly vibrating / sex of the tectonic plates through my legs’ could have been a killer half-rhyme) begin to rub.

Essentially a humane work, Savage embraces the Jungian shadow – the pervert in each of us, if you like – so you don’t have to. The effect of Tamás’ ironic candour, when it works, is to put the reader at ease, as if airing dirty laundry while handing out tumblers of Pimm’s. And the sacred and profane relate to each other in a similar way: too much of the former and it’s all Songs of Praise; too much of the latter and it’s all Made in Chelsea. This is something that an artist like Leonard ‘Little Jew Who Wrote the Bible’ Cohen accommodated, and it’s Tamás’ best asset. Tamás’ writerly eyes and ears can only get keener: Savage is a promising, peculiar offering from a poet with guts, even if they’re sometimes presented as offal. 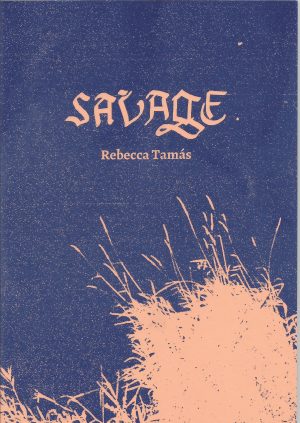