Khairani Barokka’s first book of poetry, Rope, is published at a time in which the lyric poem is being reexamined and reoriented, the form newly charged with political meaning in the hard light of its hitherto unacknowledged ideologies.

2017 was, and 2018 will be, an intense reworking of our poetics in response to previous failures to address power imbalances embedded into poetry’s institutions, thematics and – perhaps most importantly and complicatedly – its formal constructions. The politics of identity and the body have been substantively present in lyric poetry more-or-less since the genre’s origins, of course (Sappho’s a good benchmark); what seems new in this moment is an explicit examination of the politics encoded into formal traits of lyric writing.

Rope marks a notable intervention in this process of reevaluation. It’s a work which seeks to play upon the instability of the lyric, the slippage its habitual fluidity and multivalency allows across borders which more analytic writing tends to reproduce, wittingly or not. In particular, Barokka works to draw portraits of situations in which the World – in its grand geopolitics, its colonial histories and its looming ecological disaster – gets swept into our most intimate, personal moments and relationships. The poem ‘climate nocturne’ is a good example. It opens like this:

i sit on a man on the brink of love
and worry about the weather.
the bathroom light is on
and it will kill us. it will kill us
by virtue of contributing
to the whirlpool of heat
that will rise up and plunder
from the vast of wet soils […]

That first line evokes precisely the traditional lyric tendency to insularity, the claiming of a sphere purely personal: it has sex, the present tense of personal pleasure – it even ends with ‘love’. And then the apparently bathetic shift into the second line, and then on: how little all of that ostensibly private space matters in comparison to the weather. How can we take pleasure in love and sex when the world itself is falling apart? And yet, there’s something sexual – or at least recognisable in reference to writing about sex – in that ‘whirlpool of heat / that will rise up and plunder / from the vast of wet soils’. This is typical Rope-behaviour, a poetry conceptually but also formally unwilling or unable to separate the intimacy of bodily experience from the transnational significance of, for example, environmental catastrophe. And far be it from Barokka’s lyric to escape into orgasmic solipsism: ‘climate nocturne’ ends ‘i tire and bleed, dismount. / lie down in a nightscape studded with sirens, hear the metronomic hum of human breath.’ The leaking individual body resumes its place in a landscape of machinery and danger.

It’s a major trope of the book, this opposition between an organic indeterminacy and a mechanical, synthetic bid for fixity. Again and again we find the desire for stability characterised in violent industrial or institutional terms: ‘all of us […] rivet-welding / selves to the earth’; ‘she might have navigated the streams of becoming / with claws and iron’; ‘…soldered myself to your skin…’; people attend cathedrals ‘looking to stab down / mystery in the eye’. There’s this fantastic passage in ‘Flood Season, Jakarta’:

While inside us,
we will never have felt
more present in the world
nor deadened, alive to the whims
of rivers and the sea, and bare.
Meaning bolts itself to hunger […]

Meaning and the construction of meaning aren’t separable from economic or social conditions, this passage implies; neither must they admit of neat borders or exclude contradiction. But the subtle insight Barokka brings to this idea is that lyric poetry is just as much an artificial imposition of meaning – in the rarified air of at least relative intellectual comfort – as the other processes by which we wrestle significance out of the objects which surround us.

What makes her Rope particularly striking, though, is its recognition that lyric poetry weighs in on both sides of this debate. Within poetry’s weird unsettling of meaning is the converse tendency to make claims to significance, and thereby to impose upon the world and its peoples ideas which originate from the poet, the poet’s vision and the conventions of poetry. In ‘Ramadhan’ she writes ‘Refuse to write the rhythms / of prayer in italics, it’s not that exotic.’ Elsewhere, more complexly, we find:

I’d remember lying next to your throat
with its forgotten myths,

panic to a place where I’d hidden your gift of figurine,
a farmer boy playing a bamboo ring flute on an ox.
Totem for origin: a people of soilmen and flautists.

That’s from ‘Balada Gayung / Ballad of a Water Dipper’, and this multilingual title – a strategy foregrounded in the book’s section titles, which are numbered in Baso Minang and Javanese as well as English – summons reference to the reason such totems might be required: to stave off the encompassing claims of the English language (of any single language) for a poet ‘half-Minang and half-Javanese’. One of the referents of the title Rope is the braiding action of these variousnesses – linguistic and perspectival but also of poetic affect – into one, now stronger, tether to the world.

This is a poetry which is aware of a mechanism which Sandeep Parmar analyses in her essay ‘Not a British Subject: Race and Poetry in the UK’, a mechanism which ‘systematically rewards poets of color who conform to particular modes of self-foreignizing’. Barokka resolutely refuses the urge to inflict the distortion of exoticism on the experience she presents. Moreover, she is fruitfully entangling such questions with the more ontologically primal question of whether any depiction of the world is by nature a twisting of that world, a projecting of human categories onto a more chaotic set of unknowable noumena.

And Barokka frequently finds a way of expressing this twisting chaos in her liquid lyricism, her rhythms streaming by, carrying a mess of jagged and beautiful things:

hordes-up-and-down with black
peci, white mukena, scarlet
post-dzikir sunrises, each year gone
with its month of dates in the mouth
when the dark bleeds in.
……………………………Television
blaring azan and inevitable local
waterfalls on-screen; Maghrib.

But the problem of writing a book of poems which closely scrutinises lyric style is that… it invites a close scrutiny of its own lyric style. Barokka’s idiosyncratic prosodic elan sets up an expectation which in its weaker moments the book fails to fulfil. There are plenty of moments in Rope which stumble, which damage the lyric texture of the writing and act as barriers to appreciation of the conceptual work the book’s doing.

These might take the form of purposelessly jarring line breaks – ‘each piece they adhere / to is a women’ or ‘when you lock / up the studio’ – chosen apparently to ensure evenness of line length: it’s these moments at which it feels Barokka is aspiring to a neatness which doesn’t suit her purpose. While a couple of clumsy rhythmic hiccups wouldn’t count for much in some poetries, Rope is very much engaged in making hay with an attentiveness to lyric convention. It recognises the ideological in the aesthetic, and when we get a sense that some conventional aesthetic is in the driving seat that recognition is lost. Lines like ‘This wild heart, slinging blood-ribbons slicing precision-thin’ sound dangerously close to the elegant bullshit of bad Bob Dylan or good Dylan Thomas.

So in some places it feels as if there’s an aspiration towards a conformity to traditional ideas of lyric attractiveness; there are other moments at which Barokka sacrifices her customary fluidity in the interests of a stale lyrical chiming. ‘Salt-tongued priestess of the high seas, / specimen-large, slow glide under leagues’, for example, is classic bad lyric practice: a physically vague word (‘leagues’) is switched in for something else (‘water’, say) purely for the rhyme with ‘seas’. At these moments we’re made aware of the more basic musical tactics which are so valuably complicated elsewhere. At other places, an over-easy go-to assonance and overload of adjectives creates a distractingly mannered poetry:

What I’m trying to illustrate with these examples is the way that Rope, on occasion, demonstrates a lack of attention to the designed formality of poetry which elsewhere it benefits so richly from exploring. But – all this amounts to, really, is just the lack of polish you’d expect to find in any first collection; it’s only Barokka’s impressive scope, and her taking on the lyric as subject, that makes it noticeable at all. These hitches certainly aren’t frequent or significant enough to mar even half the poems here; Rope is an extremely impressive debut. 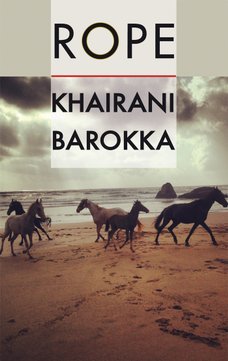 You can buy Rope from Nine Arches Press here.

Rope by Deepak Bhaskari. This image has been cropped and filtered.