Home » Blog » Review: ‘All the Prayers in the House’ by Miriam Nash

All the Prayers in the House opens with a short and incantatory poem called ‘Vesper’ that shrouds the collection in mystery before it has even really begun. In its broadest sense, it means ‘evening’, but it could also apply to the candlelit evening prayers of the Presbyterian Church. This in itself conjures up the predominant faith of the Scottish islands (excepting perhaps South Uist and Barra) which in turn evokes the ghost of Robert Louis Stevenson, who acts in this collection as something of a ghost guide, or counterpoint voice to that of the author.

When I first read and re-read ‘Vesper’, I struggled to understand it and was perhaps unfairly reminded of Norman MacCaig’s famous phrase about his poetry being a ‘long haul to lucidity’, or perhaps Nash’s own setting ‘all the prayers of the house to glint’. But I think the intention is to make sure the reader knows straight off they are not to be entirely comfortable and complacent in this particular house of poems, which can be both hermetic and obscure, but never facile. More than this, if we are reminded of prayer by candlelight, then this small opening poem acts as something of a spiritual trig-point. It shows us that the poet and the poems begin in darkness and mystery and will hopefully lead us to a new awareness and illumination.

Nash originally hails from Erraid, a small island off the West Coast of Scotland, and her poems in this first collection come flecked with archipelagic identities and myths (such as sealskins and selkies). She covers some similar terrain as that of her fellow Bloodaxe poet, Niall Campbell; however, what is uniquely Nash’s own is her engagement with light (and therefore darkness) and more specifically, lighthouses (Erraid boasts a lighthouse designed by Robert Louis Stevenson’s family).

The collection utilises the ambiguity of lighthouse light being both a beacon of hope as well as ‘a warning or a guide’ (‘To Tend a Light’) against potentially fatal weather conditions. The twist here is that quite often the extreme weather is human-generated – ‘I never guessed the storm I thought / was coming might be brought by me’ (‘The Wife’s Apology’). Indeed, there are countless stories exploring and articulating fractious and fractured emotional atmospheres: family ties, death, wayward siblings, parents living apart after divorce, and a long line of unsuccessful suitors and step-parents. From ‘Stepmother’:

in this house, test

your resistance, then tether

myself to your leg. I could smother

you under your pillow. I could let you be more.

Of course, it is worth remembering that no matter how true to life these poems appear, they are also shot through with layers and echoes of existing stories, such as fairy-tales and myths. The above poem is a good example of a poem that could read equally satisfactorily in both a realistic and fairy-tale light. It is little surprise too that Nash finds kinship with the work of Robert Louis Stevenson, whose work too was never clear-cut and was instead imbued with split identities, and multiple meanings, or potential readings.

While Nash amply demonstrates her formal proficiency and versatility in terms of technique (ghazals, villanelles, epistolary verse in the form of letters to and from the ghost of Robert Louis Stevenson, etc) I am often made aware of there being two types of poem to this collection. There are those poems that feel genuinely urgent and often cast aside various constraints and expectations, and those which showcase Nash’s formal talents (and as such read like successful poetic exercises) but can come off as overly studied. For instance, ‘Stepmother’, cleverly employs a special technique devised by the American poet Terrance Hayes where each word on the end of a line is an anagram of the title, but I don’t think you would notice this without the aid of a page of notes at the back of the book.

My impression is that throughout the collection a voice is tussling with identities, family history, depression (which Nash repeatedly describes as being ‘underwater’), ventriloquizing the voices of others (such as Stevenson). It is only really towards the end of the collection that a voice boldly its own breaks out in the poems ‘Love Song for a Keeper’ and ‘Dear Mother Father God’. The latter poem brilliantly closes the collection on a note of positivity and addresses the idea of ‘the prayers in the house’. The poem itself is a catalogue of all the testing times prayer was called upon by the speaker and it closes with a lasting image of love, determination and self-assertion:

let me wake up and feel safe. I meant it. I feel safe

at this desk and in these books. I love the man downstairs

If he needed help, he’d shout out Miriam and I’d come down.

What is so winning here is the idea that out of an historical feeling of powerlessness comes a new empowerment that lies within the speaker. This attitude of self-determinism seems to jar with Stewart Conn’s archaic blurb description of Nash being a ‘songstress’, a word which implies a singer of someone else’s song and is a quaintly Victorian word that I don’t think can be applied to Nash’s striking and spiky music. I also admire that Nash has the confidence to write her own name into her poems, which gives them an added sense of immediacy and authenticity.

Nash’s faith in her poetry transcends religion, and I admire how God is shown as simultaneously matriarchal and patriarchal. Throughout the collection, Nash interrogates gender and identity, with appearances often being swapped and roles being reversed, which again brings to mind the ghost of Robert Louis Stevenson and his fascination for split identities. Take, for instance, ‘Prayer for My Father as a Child’ where the speaker-daughter is protective of an image of her father as a child:

Let the shadows that harbour

stir when harm is stirring.

I’ll sleep in the drawer

I’ll turn in the locks.

And in ‘Love Song for My Parents, 20 Years Divorced’ the speaker goes over the early years of her parent’s courtship and marriage and imagines her mother sewing her own wedding dress from a pattern in Vogue. The resemblance between mother and daughter becomes blurred so that the speaker declares:

The small girl in the wedding photograph –

she isn’t me. But I made the mistake

for long enough to think I heard that vow.

Perhaps the ultimate role reversal takes place in ‘The Father’s Caesarean’, one of the key poems in the collection, where a father figure ‘rents a flat / in a converted hospital’ and after falling asleep, wakes up on an operating table…

he comes to, mid-procedure: hands inside him; edges,

separations, weight. Something umbilical moves in his skin

each of his children out of him: not babies, but small,

bundled in hats and scarves. The street is full of foxes’ yells.

The surgeons lay the children on their father’s chest.

There is a power here to the full story not being declared – we are aware that this is a broken marriage and the poem appears pregnant with a symbolism that is not clearly spelled out for the reader. The image of the father giving birth to his children is haunting and unforgettable nonetheless and speaks volumes about a radically changed set of family circumstances. I feel that it is these troubling poems make the collection particularly compelling, and not necessarily the poems which display technique or speak of Stevenson and island life.

In the end Nash as a poet is a singular lighthouse keeper, using her craft to illuminate some of the darker aspects of her life. The collection begins in darkness and with candlelight and Nash travels through memory and myth in order to find her own identity and voice as a poet. Whereas Robert Louis Stevenson was physically well-travelled, Nash’s travel is far more of a spiritual and mental kind, in a journey towards a realisation of self and the worth of that self. These are poems of warning and danger like a lighthouse as much as they are guiding lights through a troubled childhood and into adulthood. Not all of Nash’s prayers are clearly answered, but that isn’t the point as the very composition of a poem is an act of secular faith, about drawing strength out from within. This couldn’t be clearer than in the beautiful penultimate poem ‘Love Song for a Keeper’ which is all about the cells of the body being renewed every seven years, this renewal an auspicious sign of calmer and brighter waters ahead:

As our chests press again, stranger to stranger,

our particles in motion, trembling, raw,

let my flesh blaze to yours, for seven more. 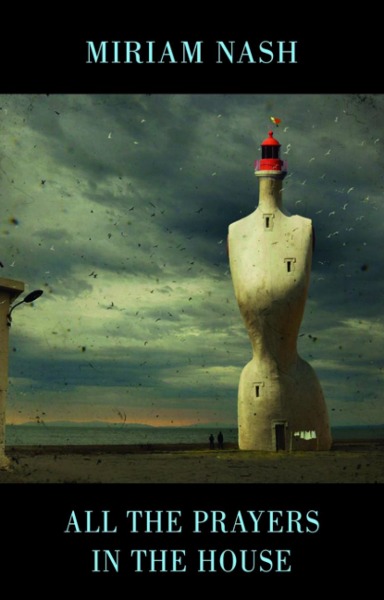