Ella Frears’ Passivity, Electricity, Acclivity is one fragmented but connected lyric essay. Where the lyric essays that are most frequently referenced (Maggie Nelson’s Bluets, and Claudia Rankine’s Don’t Let Me Be Lonely and Citizen) tend to work in small blocks of prose (or prose-poetry), Frears explodes the lyric essay form, producing the familiar blocks of prose, but staggering them between line-broken sections that are still essayistic.

In this, she recreates a rollercoaster ride: leading us slowly up the inclines, hurtling around twists and bends, plummeting us into the uncertain.

The pamphlet opens with the speaker’s ‘near abduction’, a story that unfolds through the pamphlet:

For years after my near abduction,
I told my mother I could smell him, still,

because that was easier than explaining
that it wasn’t so much him I could smell,
but something new in me.

The opening’s sensory focus drops the reader into Frears’ atmospheric lines and into the pamphlet’s central concern: how can we possibly know ourselves?

The pamphlet is an amalgamation of several strands of stories about the speaker, her unknowability and unstable sense of self, each fragment adding to that instability to cause a creeping tension and sense of threat: the way we become increasingly scared as we move up the incline of a rollercoaster. I use ‘speaker’ here because identity is so unfixed in Passivity, Electricity, Acclivity, and I don’t want to assume that the ‘I’ is purely autobiographical. Questions of how we are seen, how we see ourselves and what we see are important:

A boyfriend who thinks I have seen him kissing
another girl outside the rugby club tells me
that he couldn’t bear how heartbroken I looked;
that he regretted it the moment he saw
how much it mattered to me.

But I hadn’t seen.

If aloneness is thought to be a state where one might ‘get closer’ to oneself, have a greater sense of fixed self, then Frears reminds us that there is no certainty, that existence is based on perception, memory and interaction – and interaction can reveal something even more frightening about ourselves.

When reading Passivity, Electricity, Acclivity, I was reminded of an essay by Frears’ editor for this pamphlet, Jack Underwood. I read The Shape of Oblivion: Poetry and the Rollercoaster on my phone years ago, on a train platform, on a winter evening as I waited to go home for Christmas. This memory has remained so clearly with me because, standing hunched over my phone, breathing into my scarf for warmth, I realised that poetry could be written about in an exciting way – not just for university essays, or academic books – and that our everyday lives – going to theme parks, watching television, going to the supermarket – were integral to how we can try to understand poetry, and how we write poetry as well, and this is essentially how we try to understand ourselves, all the while knowing that it is a futile endeavour.

In his essay, Underwood writes that ‘form in poems is not to do with so-called rules, or the number of lines and all that guff, but more with how an argument is literally “shaped”,’ and that ‘form is the whole shape of the argument, and poetry and rollercoasters are shaped deliberately unusually, for deliberately unusual effects.’ This idea of argument and shape is crucial to understanding how Frears’s pamphlet moves.

The story of the near abduction is returned to and refigured throughout the essay. We learn what happened in reverse: that the speaker is safe, and that events surrounding the near abduction are somehow even more nightmarish than we could imagine:

The night of my near abduction,
the hotel manager took me into the room
of a man who fitted my description.

We crept in and stood over his sleeping
body, together in the dark, is it him?
I strain to see, afraid of what will happen
if his eyelids lift. No.

The bizarreness of this episode – of taking a child into the room of a man who intended to do them harm, and to creep in while he sleeps – is compounded by the slippage of time. The subtle movement from past to present tense suggests that the memory, and all its fear and guilt, is being relived, especially when that guilt becomes explicit:

I write a letter to the girl who was abducted
because I failed to identify the sleeping man.

I thought I was special, chosen.
I walked out of that room thinking he was my problem
to leave sleeping. Please understand.

The movement of time and place is subtle throughout. There are small references to a ‘you’:

In the restaurant, on the roof terrace
you are facing me and I am watching the moon
rise against a bright blue sky behind you.

Baby, I want to say, hold the moon a second
I’m already carrying so much.

The scene here is almost dreamlike, romanticised. The speaker’s voice shifts slightly to fit the scene: suddenly, she is saying ‘baby’. Suddenly she is able to know herself well enough to ask for something, a decided contrast from an earlier fragment:

At a party a boy follows me into the bathroom
claiming that when I left the room
I nodded for him to follow.

I let him in, because
why not take what I’m told I want
who knows, he might be right.

Interwoven with the telling of near abduction is a story of the speaker’s housemate, Lucy:

I lived in a house for a year with six strangers.
One of them was a Catholic girl called Lucy.

Two weeks in, though we’d barely talked
she told the others in the house
that we’d slept together.

Lucy is an unsettling presence, one that challenges the speaker’s reality and sense of self. (I can’t help but think of Kendrick Lamar’s Lucy, her seduction, and the name’s similarity to Lucifer). If the self was unstable in the speaker’s childhood and adolescence, Lucy problematises it further and to extremes, so that when the speaker asks, ‘What can a woman take from a woman?’ it becomes apparent that the biggest mistake that someone can make is to under-estimate a threat or fail to see a threat at all – especially if that threat might come from within.

The pamphlet also interacts with ideas of parable. There is a story of shoemaker who ‘made shoes for spies’, and the story of Merlin, ‘a man paid to dress as Merlin’ for a small theme park, who ‘began to think he was Merlin’:

[…] He’d hang around town in his costume, just
waving and pointing – in the supermarket, on the pier,
through café windows.

These stories take on a fabulist tone, engaging with the essay’s over-arching concerns of identity, imperceptible threat, and near-abduction, but constantly resist a simple, straightforward moral. How to avoid a problem of identity or threat is not explained, and so we are held over the drop at the top of the incline, knowing that we will be thrown forwards, both anticipating and dreading it.

In The Shape of Oblivion, Underwood writes that for a poem to have meaning, ‘you need the dangling, speeding, hapless body of the Rollercoastee, as much as the structural mechanics of the Rollercoaster itself. A Rollercoaster is only meaningful when someone is coasting its rolls’, which is to say that Frears’ pamphlet works because the reader is the rollercoastee, somewhat unwittingly taken on the inclines and descents of this lyric essay, thrown into corners of their own uncomfortable memories and unfixed self. There is a sense, too, that the speaker is on a similar ride:

The thing about telling you about my near abduction is
that I have to put on his voice, say the things he said –
firstly sweetly then severe. I see the effect on dinner party
guests, on my parents, on you when I told you. For a moment
I am him. I have to become him – otherwise it doesn’t work;
otherwise none of this works.

The admission of becoming someone else, someone who poses a significant threat, and specifically in aid of getting something to ‘work’, shows how entirely the speaker’s sense of self is destabilised, and how selves are performative acts, a skin we wear or body we inhabit in order to make things ‘work’. This makes us question how we have been manipulated: what story have we been allowed to see, and what has been omitted?

There comes a creeping sense that the ‘you’ is in fact a direct address to the reader, that all along we have been watching the speaker’s performance, unable to put our finger on its strangeness. The ending of Passivity, Electricity, Acclivity is so perfect in its composition and execution that I can’t reveal it here, because, like the speaker says, ‘none of this works’ unless you read the whole thing, in its entirety, in one go. When I read the ending, I felt like I was finally being tipped over into that final descent of the rollercoaster; I wanted to scream. 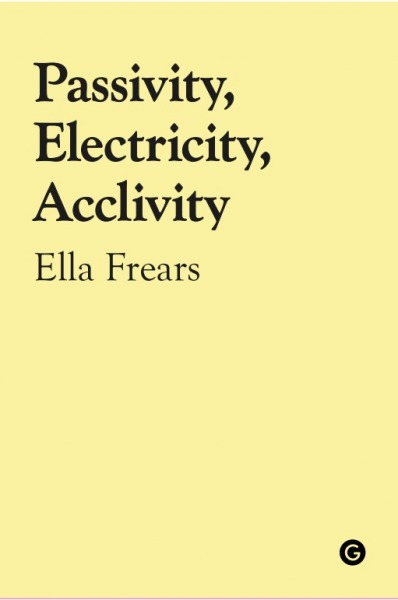 You can find out more about Passivity, Electricity, Acclivity from the Goldsmiths Press website.

Roller-coaster by Jeremy Perez Photo. This image has been cropped and filtered.