Noir is a tightly woven collection of half-told narratives, which leave room for the reader’s imagination. The opening poem, ‘Puzzle’, reveals, manifesto-like, the intentions of the book:

If I look closely I can see just how these
red-roofed houses slot together – where
to unclip the lid on each, lift it gently
and peep inside….

…It’s only occasionally a roof won’t click back
neatly – I leave it tilted. Have to hope this
won’t upset the whole. Or that it will.

It is an unsettling opening and shares the duplicity of film noir protagonists, who are often forced into situations where they have to break the law. Like many of those films, Gann’s world is voyeuristic and intriguing, and feeds off of darkness. A neighbour raking leaves in his garden ‘straightens things under a white tent’ suggesting the mise-en-scéne of a forensics team. Rain falls in ‘drops big as bullets’. A girl’s ‘laughing eyes are hollow / sockets’. The section ends with a poem titled, simply, ‘Prisoner’.

Like many recent noirish TV shows, Gann uses the five sections of Noir to open various windows on disturbing situations.

Darkness is the wave that carries us crashing,
crashing onto this beach where scared young girls
wander barefoot, dressed in pale vests,
move like dancers with thumb-bruised arms.

Throughout the book the speaker takes on the role of an observer. The opening section, ‘Surveillance’, details the comings and goings of inhabitants of a seemingly-ordinary street and bares some resemblance to Douglas Dunn’s Terry Street, which detailed the lives of working-class neighbours. Whereas Dunn celebrates, Gann enquires, suggests and casts doubt.

The collection’s emphasis on observation could also be read as a metaphor for the role of the writer. In his detective novel, The New York Trilogy, Paul Auster writes that the writer and the detective are ‘interchangeable’. Gann trades on this idea. Each poem is an investigation. The poem ‘Cluster’ in particular, which weaves the routines of a lecturer and a writer, connects the act of writing to dark matter. In his essay, ‘Feeling into Words’, Seamus Heaney celebrated the allure of the darkness, and how poetry was, in a sense, an excavation for secrets or ‘revelations of the self to the self’. This begs the question, what secrets did Gann uncover in writing Noir?

Violence is inflicted upon women seems like Noir’s core theme, and many of the poems feature situations that, without explicitly stating it, allude to domestic and sexual violence. The poem ‘Corners’ is a terrific narrative of suspense, which uses quotidian detail to mask a woman’s fear of her husband:

It’s after his late train pulls out,
and a passing friend, concerned, touches her
back gently, that she bends double on
the pavement outside the station, and cries out.

Several references to butterflies and one to John Fowles’s novel The Collector (in which a butterfly collector kidnaps a woman to add to his collection) echo the somewhat malevolent placing of characters in terrible situations, which braids a foreboding sense of terror throughout the book. In the excellent ‘Old Wives’ an ‘endless stream of wives and mothers’ continuously gather at a kitchen table to ‘weep and smoke and whisper secrets’.

In poems like ‘Old Wives’ and ‘Corners’ Gann develops a real sense of sympathy, and in doing so protests against the all-too-familiar trope of women as the silent victims that is all too typical in film noir and neo noir films. However, Gann strays into darker territory. The book’s third section, ‘The Bloody Chamber’, is named after Angela Carter’s retelling of Bluebeard. Gann’s poems also sometimes depict women in truly frightening situations:

He holds her in his vice.
The place is soundproofed.
She’s screamed and screamed
and no one’s come.

Pauses at her stitch, but does not speak.
He’s taught her about interrupting.

There’s a fear here than Gann is being gratuitous. Where before she seemed to answer back, in these examples she risks becoming complicit. Gann tip-toes around describing the violence, being neither too-graphic, nor too-clear. This, paired with the sometime reliance on crime-story archetypes, can leave the work in this section flat. Are these micro-fictions, intended, as in Carter’s short stories, to be adult fairy tales that challenge the representation of women? If so here Gann refuses to rescue her characters. Like in many films noir, the world just is.

Deryn-Rees Jones’s book-length poem Quiver is an apt comparison. Although it too deals with the murder of a woman, Rees-Jones interlaces her noirish murder-mystery with a study of fertility. It also subverts male dominance over a female character by having two female agents, the narrator and the narrator’s alter-ego, Faith, as investigators. For some, Noir might not go far enough to challenge the terrifying norm, but perhaps Gann presents it plainly as a way to avoid glamorising it?

But this doesn’t detract from her ability to write tense and dramatic poems. Gann uses form and line length to dial up the anxiety. The well-crafted, one-sentence ‘Girl in the Hall’, leaves little room for breath:

Let’s call her Hetty,
this girl who isn’t me,

this thin white one,
this bare-knuckled beauty,

this bruise-eyed darling,
this one I’m half in love with,

who lives in the wall,
tap-tapping her urgent warnings,

the ones I adhere to
in this narrow dark corridor

open mouthed,
shrunk into a skirting board,

naked down the hall,
searching for a shower –

when she shouldn’t
even be here.

Gann’s poems, which tackle risky subjects, do so quietly. A later poem, ‘In the Classroom of Touch’ echoes the theme of domestic abuse and features a teacher creepily demonstrating to his pupils how to hold a person. Where other writers would go in guns blazing, Gann implies events subtly, which is one of her strengths. Her ability to quietly seduce and persuade a reader into visualizing her scenarios is a clever, albeit sneaky way of shocking them:

…Giles-? The boy
stares down at his feet, face pink. His worst subject.
Mr Farnham waits quietly, bends his head,

smiles. C’mon Giles, he says gently. The boy
staggers down the ragged aisle between assorted
classmates. Waits while this man

Now is Noir noir? The poem noir is, by my definition, a poem that derives and exhibits its thematic and visual style from the body of films known as film noir. It should generate a sense of anxiety, pessimism and obsession and may draw from film noir’s image pool, but will risk pastiche by relying on it too heavily. One example of poem noir pastiche is Paul Muldoon’s Chandler-esque ‘Immram’, which employs the hard-boiled tone and clue-to-clue structure of many films noir. It is to Gann’s credit that she avoids adopting such a synonymously noirish tone. Instead, from portrayals of a close-knit neighbourhood of voyeurs, to her more allegorical work, she creates an independent tone of anxiety and sexual tension:

Every evening I call you
from a phone box in the basement.
A queue is always forming.
The door slides closed, creating
a pocket of hot silence.

Pennies drop. Hello? Are you
all right? Me – crying – No…
We fold into handsets. Here I am,
you whisper, pushing your door to
with socked toe.

You say there’s nothing wrong
with me. At the end of the corridor,
a figure mops, sloshing away
my year’s intake of scum
with disinfectant.

Every evening I call.
I’m with you, you say. When
the pips go, the dark wave inside me
swells. I open
the door and drown.

I do wonder, however, whether the collection’s title and evocative atmosphere leads to unnecessary comparisons. By aligning itself with film noir it demands to be read alongside that contested body of films, which changes the reading of them.

Occasionally Gann strays from the obviously noirish and is also more formally experimental. ‘The Queue’ enacts its subject, anxiously snaking down the page ‘small as a worry doll / on the horizon’ in a poem that is, ostensibly, about queuing for an author’s signature. And the wonderfully musical poem ‘The Letter’ ingeniously uses the format of a letter to explore how one can become trapped by a doctor’s diagnosis:

With clipped finger nails, scrutinise its contents under the surgical bulb of a table lamp….

At times Noir might have drilled a little deeper into why its world is so dark, or, perhaps, explored how a sense of claustrophobia or surveillance rules our lives, but strength is also gathered through this refusal to stray or over-analyse its duplicitous world. This relentlessness is echoed between poems through the recurring use of shadow and light, which serves to compress the terror of Gann’s dark world, and lend it urgency. 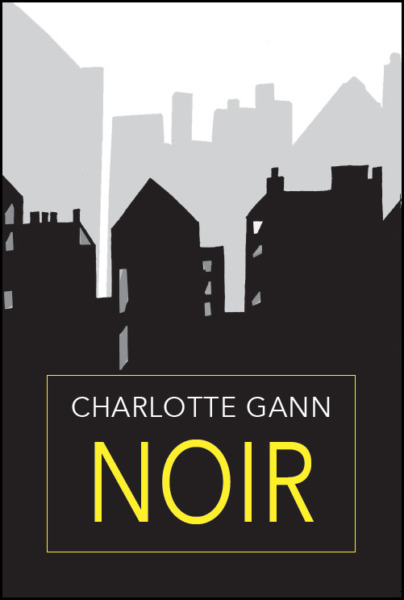 You can order Noir by Charlotte Gann from the HappenStance website.

Reviews are a new initiative from the Poetry School. We invite (and pay) emerging poetry reviewers to focus their critical skills on the small press, pamphlet and indie publications that excite us the most. If you’d like to review us or submit your publications for review, contact Will Barrett at [email protected].
Save