Moon for Sale does not pander to, or patronise, its reader and often reading the poems you become aware you are in the presence of a mind working much more quickly and sharply than your own.

If, like me, vast swathes of your reading diet consists of fairly orthodox lyrical poetry, then it might serve as a memorable and salutary palette cleanser to read Richard Price’s work from time to time. I wouldn’t hesitate to label Price as a lyrical poet at heart, but instead of retreating or escaping from the world as many lyric poets do, he lets in all of the background noise, chatter and interference, bringing together fragments of experience into longer-than-your-average poems that act as word or phrase hoards, such as in the rather post-apocalyptically titled ‘They Named the Tree, Flowers and Mushrooms in the New Wilderness’:

Throughout Moon for Sale, Price’s work exploits the cliché and platitude in both daily and poetic language. He is particularly notable as coiner of original poetic statements – see the phrase ‘embrace’s shepherd’ for an elbow in ‘Haiku + Tattoo = Taku’ or ‘the sun soothes the gorse to bloom’ in ‘Motorway and Track’ – working playfully in his poetry with the pitfalls of everyday language, and with wordplay twinned with a deep-seated social conscience:

The world warms, but the human temperature is cooler.

Greed looms out of scale, beyond watch or word.

I am a lay observer, I am low, observed.

In sub-zero delirium I occupy yet a high aquarium

of frozen kiss and curve. I am a propagation of the absurd.

Take, for instance, the rather tongue-in-cheek prescriptivist tones of ‘The Price’, where the speaker gets us to remember a time when certain words or go-to tactics were banned in a poem, flaunting deconstruction and the breaking of the rules as it goes along:

Remember when a poem could be banned

for beginning with the word ‘Remember’? –

for mentioning it was a poem,

for bearing the weight of twenty-three syllables

on the long oak bough of any given line?

This long poem becomes almost eerily meta-textual towards the end, as it begins to pre-empt your reactions – ‘I can sense you welcome the farewell’. The speaker’s contention is that all words in a poem have to be carefully deployed, as they all have a ‘price’.

Reading Moon For Sale I was reminded most often of Edwin Morgan. Morgan was fundamentally an ambitious lyrical poet like Price, and the poems in this collection remind me of the artistic frustration to be found in Morgan’s long (and in my opinion) finest poem, The New Divan. This poem is set against global conflict, and it too tries to find ways of appealing to the reader in non-traditional ways, Morgan’s belief being that the patterns of Western storytelling worked the reader too hard and rigidly and had to be broken up, leading to a sensory and fragmentary poetry shot through with stark personal and emotional disclosures.

Price shares with Morgan a deep awareness of the struggle to get the ‘message’ across in a poem, which is what we see in ‘Snail Mail’, its very title about the labours of sending messages:

I was open-cast mining, a land-tattoo as curse and naturalised utility.

‘This squiggly jewellery is the best St Thomas’ Day I’ve ever had.’

As the above excerpt shows, Price has a tireless eye for the contradictions in life, such as the ‘open-cast’ which was deeply divisive in its time but simultaneously an unavoidable necessity. The mention of ‘tattoo’ is a recurring motif in many of the poems here and we learn that while Price doesn’t have one himself, his partner does, and in ‘Her Tattoo has Shifted’ the speaker wakes with the uneasy feeling the tattoo has moved from one shoulder to the other:

I thought: we are abstract, we are figurative, we are calligraphy.

But we are more than aesthetics.

I thought, the kiss is so powerful, you – are powerful.

As the poem unfolds it feels as if it has been written in a hypnic state, somewhere between being awake and asleep, where dream and reality blur. Price confesses his disbelief that he is in a loving relationship with his partner, almost as if this too is a dream. At its heart this is a tender love poem, but the presence of the tattoo throughout the book shows the ways in which human life can be both painful and beautiful at the same time, how we live in a language of signs and leave our indelible marks on those around us.

From the perspective of language being ill-equipped or inadequate to capture the range of human thought and feeling, the poem ‘Inaccessible Island’ is particularly revealing:

I am on the island today.

There is one bird here that is flightless.

The speaker seems to deliberately maroon himself on an island where no one can join him as he uses language to impose distance, all the while aware at how poorly fitting and arbitrary our descriptions can be. This is what Price’s poetry does well and I admire his rather MacDiarmidian conviction that ‘There’s lyric in the language of the intellect’ (from ‘How a Book Could Be’).

I began my review by saying Price was not your average lyrical poet, but that does not mean that he isn’t intricately attuned to an artistic tradition and a specific literary past, often coming from Scotland.

The book’s blurb suggests a kinship with ‘the elegiac filmscapes of Margaret Tait’, the Orcadian-based experimental filmmaker and poet and Price’s poems sometimes act like poetic equivalents of Tait’s films, which were often made up of snatches of diary entries, poems and anecdotes, held together with song and repetitive motifs or images. As such, Price’s poems like ‘The Price’, ‘Hunt the Rain Down’ and ‘Snail Mail’ all revolve around central refrains that are often repeated.

And the influence of Iain Crichton Smith’s much loved poem ‘Two Girls Singing’ is all over one of my favourite poems in Moon for Sale, ‘The Two Girls Were Always Singing’. There is a clear heredity between both poems, but Price’s poem shows how far, in a modern context, his lyric has come. Whereas Crichton Smith’s poem celebrates the fact that the girls sing, even if they sing out of tune, Price’s poem finds that urge to sing, and sing beautifully, in dark times annoying and haunting, not uplifting. The poem seems to take place in a near but entropic future where everything has been scrapped, including most peoples’ hopes and dreams. The final word ‘drone’ is heavily freighted to our modern ears, bringing inevitably to mind warfare and the narrow chances the lyric has of surviving in such times:

It used to be a meadow, the two girls

singing that stupid that beautiful

It wasn’t background, it was drone.

The closing poem ‘These Choices Are Not Choices’ admits that the words we do have and the ways we have of putting them across are always inadequate, there being an unbridgeable gulf between the feeling or experience and the words that try to convey it; our lives are essentially short transmissions that try to go a long way and get lost. This to me does not sound like despair or defeat, but the niggling urge to go on writing poetry, to keep coming at it from different angles. 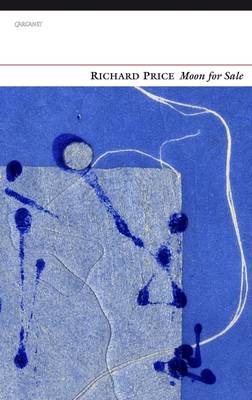 You can order Moon for Sale from the Carcanet website.