The Mains (Vanguard Editions) is a long, dark night of the soul and is not the place for studied scenes of domestic strife or costive little elegies.

The reader coming to these poems for the first time might well be thrown by them; their aesthetic is jagged, frantic, and elliptical. One thing to bear in mind is that many of these poems came about in bursts of mania before Davidson Roberts was hospitalised in 2016 with a mental breakdown.  (He talks about the experience and how it contributed to the writing of The Mains  here.) The epigraphs to the book from Dorothy Parker (‘They sicken of the calm, who knew the storm’) and The Lion in Winter (‘There’s no sense asking if the air is good if there’s nothing else to breathe’) give a sense of how between-a-rock-and-a-hard-place this collection is. The underlying semantic field is of imagery and language relating to war, but this is employed in an analogical sense to show the speaker being at war with himself, as in the opener ‘PTSD’:

A reader’s first reaction might be confusion – the pleading tone of the poem is frenetic and the message seems somehow garbled. Yet read it aloud and suddenly you become aware of its internal rhythm and music, that there is art, artifice and order underneath the seeming chaos. What seem like nervous breaks or breaths where the speaker is hyperventilating are actually carefully considered caesurae. This duality haunts the whole collection and suggests the speaker is going out of their mind, becoming two people, or, worse still, becoming someone other entirely, as in ‘My Enfield’ where the ghost of a dead loved one or friend possesses a young niece (‘Anna’) in the speaker’s care:

She is shaking my niece for a microphone

to me at this wasted age Were I someone else

then Anna would not have to be doing this

Even myself I am sick with the thought

that she is now shaking with pain

gripping the duvet as my friend

hacks her way out of the child’s larynx

One of the key poems in the collection is ‘Rhyl’ which deftly melds fact and fable. It reminds me of Edwin Muir, who, in horror at what was happening in Europe in the lead-up to, and in the midst of, World War Two, began to write haunting but topical poems, such as ‘The Labyrinth’, which brought myth alive.

For Davidson Roberts and the speaker of his poems, there is no great threat (such as fascism) bigger than the threat posed to himself by his own mind and his life going wrong. With the little niece figure Anna, Davidson Roberts shows the horror of the loss of childhood and innocence, which recurs throughout the poems in the overall realisation of the collection that the speaker is ‘closer to death than I am to birth’. Startling declarations such as this start to reveal the story underneath the layers of rhetoric and symbolism, rather like Robert Lowell’s lucid confession that ‘my mind’s not right’ in ‘Skunk Hour’.

In ‘The Doctor’ and ‘The Debt Collector’ we get close to the nature of the speaker’s angst – the breakdown of marriage, the death of the ego, and the fear that over time you become someone lesser and other at the same time:

(…) this half-man who stares me

When the doctors come     remember that I told you    please

And in ‘The Debt Collector’:

I am unknown to my own memory

The whole collection builds in a crescendo to the major long poem that closes the book. ‘Walker’ began life as an elegy for the tragic Dad’s Army actor James Beck, who died of alcoholism in his early forties. Beck became, in the public consciousness, indivisible from his Cockney spiv character, ‘Private Walker’. In this poem, the speaker becomes obsessed with the short life of Beck and convinces himself that he too is destined to be reduced to one thing only and slowly die inside because of it. In the end, the speaker worries that he might transmogrify into Walker and is driven to the brink of suicide.

The importance of voice is central to this collection, and if you look up the recording of Beck being interviewed that Davidson Roberts mentions, you find the YouTube comments are all expressing shock at the plumminess of his accent, so different from the ‘Mockney’ accent he used for Dad’s Army. It’s sad that people are so two-dimensional and narrow-minded in their understanding of the potential and variety of their fellow human beings, and there’s the rub.

Ultimately, comfort is thin on the ground at the end of The Mains but there is a sense that the speaker, and by extension the reader, has been taken to the lip of the precipice. The fact that the story/poetry exists surely speaks of survival and of being brave enough to step back from the brink: 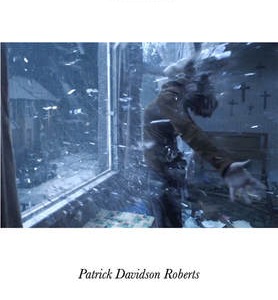 You can buy The Mains from the Vanguard Editions website.

Fusion of Horizons. A filter has been placed over this image and it has been cropped.