In this emotionally charged, overtly political collection, the Lebanese poet Zeina Hashem Beck writes her way through pain and passion, through history and politics, through bombings and journeys and injustice, through personal and political tales of family, parenthood, love, destruction, and loss.

Hashem Beck writes with great dignity, verve and directness, never shying from difficult material, inventing new forms or reinventing existing ones, creating something beautiful out of situations of horror and despair. These poems are not only about the poet’s own direct experience, but the experiences and suffering of others, often others in different countries and of different religions.

In ‘INSIDE OUT’, a poem that juxtaposes the competition of a football match between Brazil and Holland with a bombing in Gaza, Hashem Beck writes:

I haven’t slept since

he dies the next day

a player kisses a trophy

his wife and son

a mother kisses a dead child

The last two lines struck me as central to the collection, which in itself enacts ‘grief turned inside out’, as the poems represent a determined resistance against cultural and literal destruction.

The cultural destruction is held at bay partly through Hashem Beck’s determination to preserve her language connections with home through embedding Arabic in her poems. There are also a number of accomplished ghazals in the book that provide increased cultural unity. There are many Arabic words and references; a glossary at the back explains some of the finer nuances and double meanings. The poem at the beginning, ‘BROKEN GHAZAL: SPEAK ARABIC’ with its imperative title, reads almost like a mission statement and its refrain line the word ‘Arabic’, sets us up much of the material to follow, along with the careful placement of words like ‘love’, ‘wound’ , ‘afraid’, ‘dead’ and ‘broken’.

The collection is structured in four sections. The first and strongest section is titled ‘SHAFAQ’, which is the Arabic word for twilight. These poems display Hashem Beck’s ability to work within a wide range of forms and marry form and content. She explores the intensely personal as a way of exposing the political, and the poems are condensed and emotionally powerful. This section is peopled with vivid characters; some of the poems feature family members or friends who make their appearances either through description or dramatic monologues, as in the extended poem ‘3AMTO’ where a dying relative shares memories and hopes:

switch on the fan. I remember when you were little,

you cried every time your mom left you here, hid

under this small table, or in the big white jar in the salon.

Living is such a strange thing. I’ve buried

two children, you know. Do you think they’ll let me

Turn on the TV and let’s watch that show

with all those big men beating each other up.

You can see from the last line that Beck also displays a sense of humour although always with a dark resonance. In the subtly political ‘PIZZA WITH LIGHTBULB’ she writes about the family dutifully crunching through her mother’s pizza not realising it contains pieces of a lightbulb that exploded inside the oven:

The doctor on the phone

said the only side effect

would be our asses lighting up

at night. It was a practical thing, after all,

to turn into lightning bugs

with the electricity gone

from midnight until 6 a.m.

Thematically linked is the poem ‘LISTEN’, which is also about a time of danger and deprivation. This time the danger is foregrounded; there is an explosion and the speaker’s fear that her brother may have been caught up in it. ‘LISTEN’ is a concrete poem written in the second person, its two halves set in the shape of hourglasses. But this is also a mirror poem: enacting the fear of loss in the first half and, in the second half, the relief of at least temporary safety.

‘YOU FIXED IT’, the poem that follows it, is probably the finest in the book; a tremendous feat of imagination, a homage to someone unnamed where the title line is used as anaphora to help create a list of things that are fixed, from the concrete to the abstract that ends like this:

… and if your window shattered

you fixed it, taped cardboard to the frame,

and if someone died you fixed it by telling stories

about how crusty their lahm bi ‘ajeen was,

and if the lahm bi ‘ajeen was too crusty

you fixed it by dipping it in the tahini,

and if your sorrow hardened you fixed it

by dipping it in seawater, and if your country

hardened, if your country hardened you fixed it

by dipping it in song.

Here again we see Hashem Beck’s ‘grief turned inside out’ with resilience and determination in the face of tragedy described in concrete images.

It is within the creative restraint of form that Hashem Beck seems most at home. The several ghazals in the book manage to combine the lyrical with the incisive. In ‘GHAZAL: THE DEAD’ which supports the book’s mission to report and to witness, the final couplet says:

‘Some nights, the shadows wash up on your bedroom walls. You tell them

your name, ask them for stories – they have ways of giving, the dead.’

And the dead certainly do share their stories in this collection – another example of ‘grief inside out’, this time through the act of memorialising ; there is a constant will to reclaim or reassert the lives of those who are gone, as in ‘UMM KULTHUM SPEAKS’ written in the voice of an Egyptian singer and the aforementioned ‘3AMTO’ where the poet channels the beloved voice of a dying relative. Indeed, the fourth and final section of the book titled ‘Adhan’, (which translates as the call to prayer), contains a number of poems dedicated to or referring various artists: Hafez, Samira Wawfiq and Carioca are just a few of these. But the last quarter of a book is a tricky time to bring in large numbers of new names, all of which require the reader who is not versed in such things to bury themselves in the glossary.

These elegies are in contrast to the more thematically unified work to be found in the opening of the second section. ‘RELENTLESS’, again displays a ferocious imagination:

about revolutions and revolvers, about cities,

rooftops with antennas and snipers….”

And he goes on to ask:

some shade for me to sit in.

This is followed by some poetic magical realism in the new stanza, as the ‘I’ of the poem, instead of writing, begins to draw:

So I drew him a tree without roots,

a street with enormous wings,

Alongside this feat of imagination is an impressive range of forms in this section: in two devastating ghazals, one dedicated to Mosul and Sinjar in 2014 another to Syria, September 2014; we see the generosity of perspective and get a sense of the world’s interdependence. But there are other invented forms too: for example ‘AND STILL, THE SUN’, that embeds lines from Neruda’s poem “Walking Around”; another one, ‘TERROR/MATHEMATICS” uses mathematical symbols to describe the beheading of Christian Egyptians in Libya.

By the time I arrived at the third section, ‘AHWAK’, which is Arabic for ‘I love you’, I admit compassion fatigue was beginning to set in. This was an unwelcome feeling as the poems are tackling deeply important issues and the poems are incredibly heartfelt. But at this stage I felt as if I’d read a whole collection already, and the later poems are not as strong as the earlier ones. In the book’s title poem, ‘LOUDER THAN HEARTS AND DERBAKKEHS (a derbakkeh is a small drum) Beck channels many women, mothers in particular:

The woman in me is thousands

of years old, her voice louder

The final stanza’s power is slightly undercut by the last two lines where the delicate tone is lost as the poems slips into sentimentality:

Some days I manage to put her to sleep,

light her a cigarette, or pour her

a cup of coffee. Some day she boils

Some days I hold her in my arms,

rock her back and forth, let her cry.

In the poem next to it, ‘THE WOMAN IN OUR HOUSE’ suffers from a similar problem, beginning with the surprisingly pedestrian lines:

I remember a portrait

in my parents’ house

However, the tone lifts and changes again with ‘ODE TO MY NON-ARABIC LOVER’ where the ‘I’ of the poem tries to explain the cultural divide:

…. How will I ever translate

my Arab anger, my alliterations, those rough sounds

that scratch their way out of my throat

which you will find merely sexy?

Although the book is heavily weighted with the best work in the first half, the last two, heartbreaking poems won me over all over again. ‘BODY’ is about Rabeh, a displaced Syrian dancer who killed himself in Beirut; but the poem is broader than that; the content resonates back through the whole collection with the repeated use of the ampersand at the start of lines giving a sense of the relentlessness of sorrow:

… Tell me, are the mountains blue in the distance?

& does poetry matter, & does dance?

& is there a bridge where the displaced go after they’re gone?

The final poem, ‘ADHAN’, is redemptive, a kind of prayer-like aubade, finishing with the lines:

the world is beautiful and full of sunrises, prayer

is better than sleep, so you grip

your lover’s arm, the book on your bedside table,

your cigarette pack, your blanket, as if

At 104 pages, this collection is uneven; it is literally wider as well as being longer than the average collection and some of the finest poems are crowded out by longer and weaker ones. It is as if the weight of empathy and the sheer volume of tragedy contained in the poems are too much for one book. But there is no doubt that Hashem Beck is a promising, innovative and formally skilled poet bringing us necessary news from the front lines of some of the darkest corners of the world. 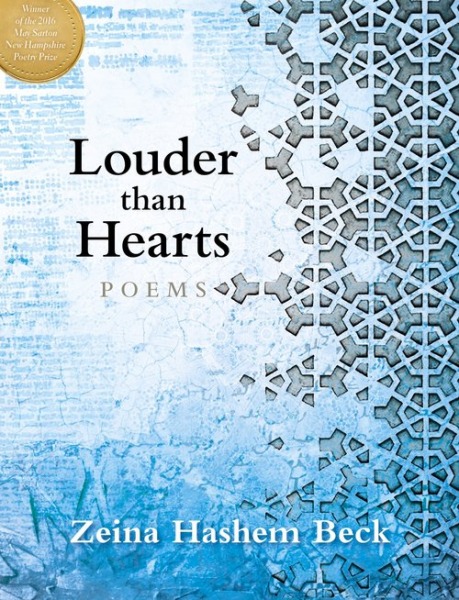 You can buy Louder than Hearts from Bauhan Publishing