W.H. Auden said he would always ask two questions of new writing: firstly, “how does it work?” and secondly – “what kind of a guy [or woman or non-cis person] inhabits this poem?” These are questions which cut to the heart of what Joey Connolly does (and does so well) in his first collection, being always aware of what verbal limitations shape a poem and what moral implications arise from invoking a person.

Long Pass, begins with a poem about a poem. In ‘The Finest Fire-Proofing We Have’ he gives us a scorching fable on the act of writing and the strangenesses involved in sketching out a fictional character:

It’s a poem about a father insulating his family home,

It’s not immediately clear as to whether the ‘it’ in question is the poem in front of us or the one set in 1924. The next few lines zoom in on the father:

It notices, the poem,

the knotted rope of his spine through his

flannel workshirt as he hunches to the skirting

This seems to suggest that the poem of 1924 is the one doing the noticing – the ‘It’. The father is being described from the perspective of another (I assume fictional) poet who turns out – as the poem progresses – to be female and probably unrelated to him. It’s fitting that a poem with so many insulating narrative layers should be called ‘The Finest Fire-Proofing We Have’.

The poet ‘drags and dwells’ – the way you would on a cigarette – on the father’s love for his wife and their new son. She ‘almost’ (but not quite – it’s still a poem) “stalls and weeps for it”. She pours so much of her love into the poem (‘love’ is repeated five times) she doesn’t want it to end, for her to have to leave the world she’s conjured into existence. And she doesn’t quite. In spite of all the tricksy meta-fictional layering, the poem’s ending is both exposing and sincere:

There’s love in the way panels are pried up

and replaced. And something else. How the poem’s author, reading

of the Medical Board’s classification of asbestosis

in 1925, how she was reminded of that young wife arriving home,

and the pride already metastasising inside the husband how

she’d never know   how anything behind the boards had changed.

The wife will never know about the insulation – I guess her husband isn’t the kind of guy to brag about his handiwork – but both father and poet must hope that their love will show through their secret labour. At this point, startlingly, the narrative cuts to 1925 as the poet sees a note from the Medical Board that changes how she reads – and sinisterly undermines – her poem of the year before. What dangers has she plunged her characters into? What else might have changed ‘behind the boards’? The epistemic rupture – between poet/subject/reader – is signaled by that gap in the last line: a conscious flaw, or an acknowledgment of the metastasising unknown.

In ‘[Untitled]’, several pages on, Connolly picks up the thread:

All I want is to tell you that I love you,

but how to trust that craft – its shoddy caulk – on those

bracing seas between us?

The desire is there but the resources are lacking. Desire, in fact, whirs behind the machinery of many of these poems, coming to a head in ‘In the Moment,’ where the body glimpsed in sex is like a shipwreck: ‘all these sensuous surfaces pushing outwards from the dark echoic hollows’. The question remains the same: to sound out the body’s dark hollows, on a ‘verbal contraption’ (as W.H. Auden called it) as inherently unseaworthy as the poem. Later, drawing on Hölderlin, this image will resurface in a more tragic-sounding ‘little skin-keeled coracle on a sea of confusion’, the line between boat/sea/body having become fully confused. The problem, as Connolly says at the beginning of ‘[Untitled]’, is language itself, or

The orthodontic meddling of language

with the world, its snaggling malocclusions

between a group of objects and their name

A ‘malocclusion’ in orthodontics is when the upper and lower jaws don’t quite mesh, often causing some of the teeth to snaggle. An occlusion is also a term for the momentary closure of the mouth required to produce those liquid ‘l’ sounds which jangle terrifically through the first two lines here (a malocclusion, in this sense, would suggest an inability to properly sound out these lines). Language, which names objects, also occludes them. And love or desire, by this analogy, is the unnamable, unvoiceable snaggle-tooth.

In his ‘Apology for Raymond Sebond’, Montaigne calls philosophy une poésie sophistiquée.  Connolly’s is sophisticated poésie, for sure, but also contains something of what the Shangri-Las called ‘Sophisticated Boom Boom’. This is a serious attempt to write philosophy as poetry, to render complex arguments about nominalism and epistemology in verse without losing sensuality’s boom boom. So on a shingle beach in ‘Themselves’, hungover, the poet tries to get his head around ‘the static hiss of unthinkable numbers’. Hovering behind is Georg Cantor’s work on number theory, the attempt to understand infinity in mathematical terms, but also an implicit sense of personal loss – why is the speaker walking along the beach hungover ‘scouring off the need for words’? In ‘Loss’, a few pages earlier, Connolly writes how

is being set down, somehow, and nothing

at all is slipping past too easily.

The inability of words to ‘set down’ (with its suggestion of placement in space as well as time) the complexity of things, the ‘nothing’ of bodily desire, comes up again and again. In ‘Comprehension Test’, a similar point is more blankly put:

How blank longs for greater blank

a case of changing one thing for another

That grim first line turns life itself into a kind of Beckettian prison sentence – one longing followed by another – that can only be completed by death (though does that count as completion?). An unbearable concept, and almost impossible ‘to bear in mind’ given that our comprehension of the world can’t help but dampen and lessen it, ‘changing one thing for another’. Rather than grasping a pebble in all its individual pebble-ness, we mostly encounter an idea of the pebble. This is explored more fully in the raft of translations – riffing on Hölderlin, Montale, de Pizan, Cavafy and Lorca – which are interspersed throughout Long Pass. Here, Connolly refuses to change ‘one thing for another’ but uses the source-text, in Dryden’s words, to ‘run division on the ground-work’. For my money it’s these translations that feel, pebble-like, most capable of weathering the test of time.

Since Lowell’s Imitations it’s been de riguer for contemporary poets to plonk a few loose ‘versions’ of mainly-European twentieth-century poets into their collections, usually cribbed from pre-existing translations. I don’t mean to sound snooty, because I love many of these versions (Tom Paulin’s The Road to Inver is an especially audacious – sometimes terrible/brilliant – example of the form) and, hey, a lot of translations themselves are terrible. Connolly’s do something different, though: usually composed of at least two parts, the first will cleave fairly closely to the source-poem, while the second (or third) will give a more personal, tangential interpolation. Rather than fail in their faithfulness, they succeed (to quote Connolly in ‘[Untitled]’) in being ‘wrong / in corresponding ways.’  This project surely takes its inspiration from Walter Benjamin’s rejection of the binary between freedom and fidelity. Benjamin suggested a relationship between the original and its translation that’s too beautiful not to quote in its entirety:

Just as a tangent touches a circle lightly and at but one point, with this touch rather than with the point setting the law according to which it is to continue on its straight path to infinity, a translation touches the original lightly and only at the infinitely small point of the sense, thereupon pursuing its own course according to the laws of fidelity in the freedom of linguistic flux.

‘There’s really no connection,’ Connolly says in ‘What You’ve Done’, ‘the net of implication / like everything comes apart in your hands’. The poem’s thinly woven ‘net of implication’ – like human kind itself, as the bird in ‘Burnt Norton’ says – cannot bear very much reality. These poems and translations, though, offer a small point of implied contact amid the linguistic flux.

Which brings me back to that opening description of the father’s spine as “knotted rope”. Images of knottedness and involution crop up again and again (‘cosy ropes of conjecture’ in one poem become ‘the burning rope bridge / by which we approach the world’ in another). Connolly’s sense and syntax are ravelled, amphibolous, each disentangling clause giving rise to further knots, circling and coiling back on themselves. The structure of the collection seems to work on this scheme, too, teasing together ideas and images and sealing itself in at the same time.

Long Pass ends with a ‘Last Letter from the Frontier’. The reference here could be to Seamus Heaney’s ‘From the Frontier of Writing’, except that in that poem Heaney is interrogated by soldiers, ‘arraigned yet freed’, while Connolly is continually self-interrogating and forever unfreed. In fact, by the end of the book he has given up on the possibility of ‘requital’ and is ‘bricking myself in.’ It’s Connolly’s skill, though, to show the brick walls – and insulating layers – of the poem-as-contraption while still implying connection. 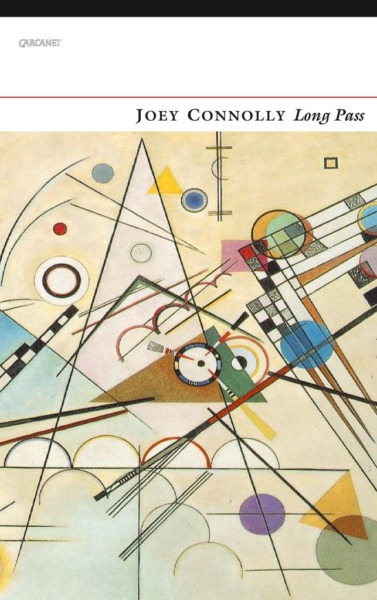 You can buy Long Pass from the Carcanet website.