Many of the poems in Landlocked  (smith|doorstop) act like an individual’s ‘truth and reconciliation’ commission applied to Zimbabwean people, politics and a natural landscape playing the reluctant stage to violence and bloodshed. The poet’s job in Landlocked is the bring up the bodies to the surface.

Landlocked is my first encounter with the poems of the Zimbabwean poet, novelist and schoolteacher John Eppel and it serves as a striking and solid introduction to his poetry. Not knowing the rest of his work, it is only possible to say that the poems in this particular collection dramatise and narrativise the relationship between the often murderous politics of Zimbabwe and the natural world that the poet desperately wants to celebrate in his poetry. The collection also poses the question of what a poet who loves his country is supposed to do when it has been so marred by decades of sectarian fighting, and irrevocably changed as a result, leaving the poet ‘locked’ or imprisoned in his own land. Zimbabwe is geographically, as well as spiritually, ‘landlocked’ in this collection.

Eppel does not overwhelm the reader with the full scale of the horror from the start, but manages a slow disclosure with great control. He praises the flora and fauna of Zimbabwe with an almost child-like innocence, but as the collection moves on the scents of flowers begin to mingle with the cadaverine stench of corpses that lie ‘in anthills or in mine shafts stuffed / like unironed washing’ (‘For the Disappeared’). At the opening of the collection, we are invited to glory in the wonder of Zimbabwe’s wildlife – such as the golden orb spider in whose web ‘Mozart is still composing’. However, this idyllic and Arcadian poetry is slowly undermined with passing references and discoveries:

I found a rusty bayonet in the yard:

some two-by-four and half a playing card:

It is not until ‘Broke-Buttock Blues’ that the reader is exposed to brutality, a depiction of someone being beaten for their supposed vote for Robert Mugabe’s opponent, Tsvangirai, while their child is murdered by fire:

When they leave, like a tortoise I crawl very slow,

when they leave, like a tortoise I crawl very slow;

but my baby stopped crying a long time ago,

From this point on, the natural world and the political, human-sculpted (and polluted) world exist in an awkward tension, as in the many recurring references throughout the book to soldiers or fighters stopped in their tracks by the sight of a flower which is then plucked to put on their uniform:

I picked it and stuffed it in my combat

jacket on top of a phosphorus bomb.

I want to tell you: moments such as these

are pretty damn close to epiphanies.

a figure of unlimited power,

his balls grenades, his cock a bayonet,

always confident, always in the right,

chuckles as he plucks a bank-side flower

and tucks it coyly in his epaulette.

Eppel knows all too well that to simply catalogue a vast litany of horrors would risk battle-fatigue on the part of the reader. So often in Landlocked you may read a poem with a superficially naturalistic sense and it is only later, in another poem, that you discover the true weight and significance of what you were reading. Without such poetic tempering, the horror would simply be too much.

For example, ‘The Coming of the Rains’ discusses freedom and being born, like Kafka wrote, ‘in chains’ but the poem stresses that it is ‘the coming of the rains’ that is important. It is only later in the poem ‘Cewale’ that we discover the coming of the rains is known in Shona as Gukurahundi: ‘early rain that washes away the dust / of harvests’; but it’s also the naturalistic metaphor used to describe the operation of the Fifth Brigade during the 1980s to track down, torture and kill anti-governmental threats. The aftermath of this is fragmentally and belatedly exposed in Eppel’s poetry, like — as in a poem of the same name — ‘Shards’:

Rare too are the human bits that in

in that low country of thorns and spines,

dropped down abandoned shafts and covered

because the police have moved the bones,

some muscle still attached to a groin,

There are glimmers of hope, also. In one moment of levity, ‘The Bow, the Boy, and the Bird’, the speaker presents his son with a bow and arrow as a gift and his son does not use it to kill an animal but lays it flat on the ground imitating the shape of a bird in flight.

As much as the poet many wish to remain as a detached and peaceful observer of the landscape and nature, Eppel is himself, as a white person in Mugabe’s Zimbabwe, drawn into the conflict. He is firstly shackled with a tremendous sense of guilt from colonialist times that is both self-generated and also projected onto him by some of the rhetoric of the Mugabe regime. Part of Eppel’s uneasy inheritance is present in the rhyming schemes of his poetry that bring to mind patriotically English Georgian poets. However, it is even more present in ‘Coming Home to Tea’ where Eppel compares the comfort of his upbringing when Zimbabwe was Rhodesia and a British colony with those on the other side of the fence, the indigenous peoples oppressed during British rule, before the outbreak of the bloody civil war for independence:

Beyond the picket, mothers thin as sticks,

all but empty plastic bags; and fathers

We see in these poems how Eppel has lived long enough to see the reversed fortunes of a white ‘settler’ population in Zimbabwe, from being the holders of power, to being disempowered after the civil war. But Eppel is very aware that the tone of white colonial privilege and power can also be found in the voice of an apologist for Mugabe:

“Look, friend, sacrifices have to be made …

I lost a favourite uncle in the war;

my post-doctoral thesis was delayed;

Regardless of political sides, Eppel is acutely attuned to the need to be vigilant and critical, and he warns us that ‘Davids are Goliaths in waiting’ (from ‘Bring Back Our Girls’) and that political power is so often a corrupting force. In ‘The Honourable Minister Speaks’ we see how anti-colonialist narratives are used for political advantage by the Mugabe regime, as a smoke-screen to cover up the crimes committed by that very regime as it attempts to consolidate its power:

Yes, colonialism is to blame,

The crime of poverty is coloured white.

The last few poems of Landlocked return to the land and to nature. There is a sense that the type of engaged poetry Eppel writes is spiritually draining to the author and so there is a need to regularly reconnect to the land, even if that land is locked by humankind and their divisions.

I happened to be reading this collection at the same time as I was giving a presentation for my Dutch language class here in Belgium. In my class there are people from across Europe as well as from Iraq, Syria and Zimbabwe, to mention only a few nationalities. One man from Zimbabwe explained that he would go back, if only he could and a man from Iraq gave a fascinating talk on the ‘Marsh Arabs’ of Southern Iraq. As my class mates talked proudly and enthusiastically about their countries, I realised how hard it must be to speak of your land which you are effectively locked out of by warfare. Needless to say, since I had not fled my own land, I did not choose to give a presentation on it. Afterwards, thinking of Eppel’s poems and their necessity and relevance to our times, I felt like I had been very complacent.

The poem ‘Dispersal’ closes Landlocked with the haunting lines ‘It’s the smell / of words not quite turning into trees’, as if words, even in the hands of a poet, are not enough to capture a sense of the beauty of the land so long marred by fighting. And in ‘Cape Gooseberries’, an elegy for a dead lover, the poet reflects on the limited time we all share, and the grievous tragedy to have to spend it mired in political violence:

that afternoon, snuggling in the back

that’s what you called it –

popping one into mine,

following it with a kiss…

how was I to know that the next one

not on your lips – all those tubes –

and the last, would be your unresponsive hand

on a white sheet smelling of disinfectant? 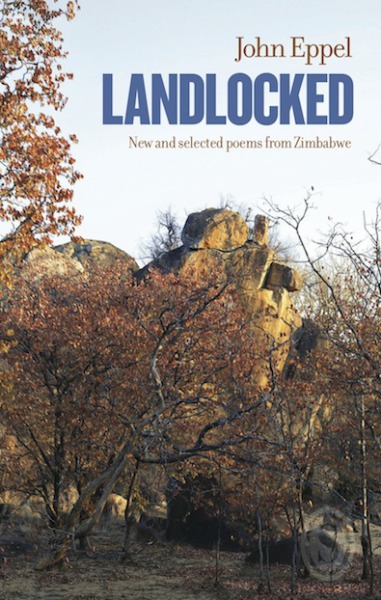