We think that once we throw something away it vanishes, and John Wedgwood Clarke’s poems play with that notion and show us how mistaken we are.

Reading Landfill, Wedgwood Clarke’s latest collection and the product of a year spent as poet-in-residence at two refuse centres near York and Scarborough, I was struck by something inspiring about these places, which were supposed to be forgotten and are often hidden away under hillocks of nettles, leaving us with a strange sense of nostalgia (I spent my childhood as a bottle-digger in dumps from the Victorian period up to the 1950s). Poems such as ‘Once it’s in the skip they think it disappears’, where the speaker digs down into a skip and comes out the other side, show us how intimately connected we are to our detritus:

Suspended in water a woodlouse trembles.

Above the woodlouse, a child, breathing.

In certain poems, such as ‘Cullet’ we are put back in touch with the rubbish we’d rather deny in the form of anthropomorphism, that the sound of broken glass being tipped from a lorry becomes ‘spoken glass’ or the starfish in a poisoned ocean that is given its own Christmas carol to the tune of ‘We Three Kings’.

Dumps show us the vestiges of generations that have passed in the most candid and vulnerable light – from ancient middens filled with sea-shells and bones to the broken toys and glass pop bottles with vulcanite stoppers of the 1950s. A magic transformation seems to take place: what is rubbish in its own time becomes valuable over the passage of time, and is re-embraced by humankind. I often wonder if our own plastic-based waste will make this change over time too, or simply destroy the planet. ‘The Sea Addressed a Marine Protect Area’ picks up on the type of pollution that cannot be controlled with a projection order, micro beads and tiny particles of plastic:

Your harbours are empty. You grow old

beside me, hungering for

a picture of your past you can gaze into

through a glass-bottomed boat,

as if you were not there,

your plastic pollen not in my every breath.

We are now reaching a critical stage where nothing remains on the planet that is untouched by human existence. I sometimes fear that if you got in a space-shuttle to the moon, even there you’d find a crushed Coke bottle in the lunar dust. Of course, the great risk of this kind of poetry is that it becomes the haranguing of some harbinger of doom, keen to predict the imminent demise of the earth, although this is always preferable to outright climate-change denial. While Wedgwood Clarke’s poems do sometimes have that admonitory tone and the environmentalist’s eye, they are also shot-through with occasional touches of humour and a deftness of image that makes us pause, think and absorb the scene:

listening to its own dead breath

things fallen out of reach –

beneath thistledown snagged on an old LP

Wedgwood Clarke’s main objective in these poems is to show us clearly that we cannot close our eyes to our own waste and that we, and all organisms that make up the fabric of the world we know, are inextricably connected to it all. More than this, rubbish permeates all kinds of life, even in a metaphorical way. As such the hospital becomes, poignantly, disposal point of memories:

At noon, voices climb the walls of glass

beep, beep – it is the buggy train

through a blessing of plastic strips.

‘Know Your Place’ reminds us of how education and class-systems can make social ‘rubble’ of people, to be dumped into disappointing lives where they must know their place. A cruel teacher offers one of their charges who wants to go to grammar school a mystery gift that must be opened in front of the class. One box leads to another until:

There’s only another, brown paper this time,

the paper of dispatch and back office,

of shop counter and bags

open it, it’s yours, the teacher urges.

Inside the box is nothing, and inside nothing

another box, in which she prays.

It’s hard to understate both the ubiquity of rubbish as a concrete reality and also a concept in our lives, it’s also hard to underplay its profundity. There is something philosophical about rubbish as we understand it now, as opposed to our pre-Enlightenment ancestors who were matter-of-fact about their bodies, their functions and their waste, thinking nothing about throwing a chamber pot out into the street. Perhaps there is something to be said about Cartesian thinking that has driven a wedge between the body and the mind, giving us a much greater sense of shame about our fallible, grotesque bodies and their excreta. But we are also still possessed of a prurient interest in what the other person is doing. Who doesn’t, when the bottle bin goes out for recycling, check up on their neighbours’ alcohol consumption by counting the empty bottles awaiting collection? Maybe I’m alone in doing this? It could be said that the great insult to the planet in the form of the Industrial Revolution did inadvertently put us back in touch with dirt with all of its various degradations. I’m thinking here particularly of the French poets of the 19th century, like Verlaine, all renowned for their curious nostalgie de la boue (longing for the gutter) and Slavoj Žižek’s funny but thoughtprovoking disquisition on the ideologies of toilets across the world (to be found on Youtube).

You might think I’ve massively overthought this, but these are exactly the sort of feelings and thoughts that Wedgwood Clarke’s poetry in Landfill provokes – both the repellent beauty and existential depth of our rubbish but also the great threat it now poses to us and how we cannot afford to throw it out and merely forget about it. Sometimes the poems here are quite cryptic, as if the poet is deciphering the runes of our own rubbish for us, but this is because he wants us to seriously stop and think about this, and try harder. For Wedgwood Clarke ‘the beautiful view and decluttered house’ is dependent on the dump. We clear out, remember things in the process and then consciously try to forget by throwing things away. Perhaps the role of the poet is something in reverse, rather like the bottle-digger. You exhume something, listen for its inner eloquence and the stories it tells, and put it back in front of the reader / consumer, restoring the memory:

we remember things, then chuck ‘em. 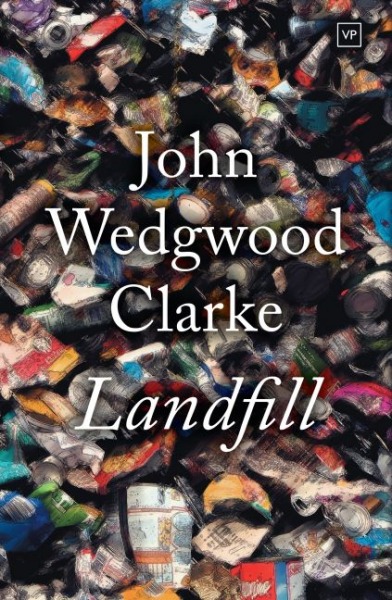 You can buy Landfill by John Wedgwood Clarke from the Valley Press website.