Kingdom of Gravity is a powerful debut and deserves a wide readership. Nick Makoha’s reflections on Idi Amin’s brutal rule in Uganda and the equally atrocious civil war that ousted him, which indirectly answer reoccurring atrocities in Syria and the Middle East, are the work of a hugely talented poet, capable of great formal finesse and startling image making:

What makes a man name a city after himself,

asking bricks to be bones, asking the wind

asking the night to come closer, to speak

to you as a tribe, asking the tribe to sleep,

language to dream? Come close to me.

In Against Forgetting: Twentieth Century Poems of Witness, Carolyn Forché explores how the language of poets who have endured conditions of extremity has been ‘wounded’, and that – regardless of subject matter – traces of extremity can be found within their poems. Many of the poems in Kingdom of Gravity lack a clear persona, and rather than relying on the ‘I’ to recount experience, his fragmentary approach is a strategy for writing about traumatic material.

This is ‘A View of Kipedo Valley’:

The wounded have forgotten their words.

At this hour the earth slows down.

Where their feet once walked my eyes now go;

To the fate of a note, they have matched this motion of battle.

The last thing they will remember are ants at their ankles.

That’s not a man in pain, it’s his body wrestling with the earth.

A bullet to the lung has dislodged his soul to the dirt.

Blisters and punctures are what’s left of the body.

Dead goats in the field know this equality.

Tyrants have shown their hand.

These corpses will want their revenge.

From the clays of the body, blood now blossoms.

The ruins of our land have become your museums.

Throughout the collection Makoha develops a unique register of symbols and images that are revisited: maps, eyes, darkness, night, mirrors, rivers, reflections, flint. Most of these are used to create a sense of the body disappearing, the abject, or becoming either exile or corpse. In these poems, Mahoka is both native and exile haunted by experience, considering the loss of his name and language:

Dear body of mine, where are you from?

As the dark moves towards a body that is better

than myself, draw me a map where leaves fall,

where every song is not a song of war.

The mob gathers in their greatness,

tearing doors off their hinges,

searching for permits. The hour

is about four. In the stillness

that comes before dawn, I ooze

They are beating his body while I stand outside myself.

A year from now I will suffer the same death by water.

This body will be a map in the dark, moving towards a shore.

By the open stove of my wife’s village there will be death by surprise,

death by marriage, death by having rummaged into the past,

into the distant past of a man that neither of us remembers.

Some poems vamp in various ways around this personal iconography of the individual costs of war; others are far more rigidly and rhetorically structured and it is in these poems Mahoka’s talents come to the fore. ‘Citizen’, for example, is written as an extended question. Although some might argue that a question and answer structure will lead inevitably to an unsurprising end, Makoha manages to maintain intrigue and surprise. Here he asks whether he can live in a country where his language ‘cannot ask the time’. Gradually, the process of questioning becomes an admission of acceptance in a waiting room in Heathrow, as the speaker reconciles his migrant status:

I am two hours behind. A heartbeat caught

in my throat. Can’t return to the country I know.

The airport is my changing room.

Set in airports from Kenya, Uganda and Saudi Arabia, to France and ultimately Britain, each of the collection’s five sequences is punctuated by at least one poem charting a journey. These poems focus on border crossings, checkpoints and customs procedures, juxtaposing travel through unstable and corrupt regions with images from Western celebrity and consumer culture. In ‘EBB:’ the speaker compares himself with Harrison Ford as Indiana Jones, and in ‘NBO:’ he reads about a book recommendation from a pregnant Demi Moore. These poems present a subtly disorientating picture alongside ones set in Uganda. On one hand we have the indulgence and privilege of the West, and on the other we have cities vanishing, ‘girls routinely raped’ and ‘boys kidnapped to serve as soldiers with guns’. In ‘LHR’, Makoha movingly articulates a simultaneous sense of dislocation and internment, as well as hope and relief:

An airport is a room. I keep talking

as if my body is elsewhere. In full sight

of a crimson God, as children we were burdens,

coffins with eyes. A professor steps into the light

to educate us. You can’t kill the dead twice.

Has he seen the militia slide down a mountain like goats,

or a beating heart explode onto a barrack wall?

Even the coffee I brought back in hand luggage

when poured in a cup is an eye, a past dark,

itching for light. So, since I cannot be the memory

of your death, let me bend the way a river does,

all shadow and sound, around a hill, towards a village

I once recognized. There are days

when this unplanned landscape speaks its music.

Echoing the movingly felt upheaval of his personal poems, a strand of more political poems explicitly engages with the rise of dictatorship at home. This strand is more direct, and questions the ineffectiveness and hypocrisy of authority. Idi Amin’s career is scrutinized in ‘Candidate A’: ‘Such men rise in the ranks and can only be removed / by death or revolt. ‘Surround him with ceremony, regulation and rules / even though secretly he feels they do not apply to him’. Even the formal, report-like language of this poem creates a further sense of dislocation. Elsewhere it is the country itself that is lost and become unrecognizable as it changes hands, as in ‘The Devil’s Clothes (Curfew January 1971)’:

Didn’t we make you president to remove us

from the elsewhere? I’ll get us back our city.

Isn’t that what you said

perched on top of your jeep, when the troops

told you that we were sick of eating grass?

My village gathered songs on a sleepy Kampala road

to rest them at your feet, our hopes rising

bread, but it was the bodies that you wanted.

This time it wasn’t the earth that cried blood.

We too would have been missing men if we stayed.

so we escaped like water from a cracked gourd…

Kingdom of Gravity not only serves as a historic document of atrocity, it acts as the powerful testimony of one who escaped and survived, and considers the complex emotional consequences. It is a collection that deserves to be recognized among Forché’s ‘poetry of witness’ canon, blending traumatic experience and the documentary with a strong imaginative flair. But never does Mahoka exploit his material. Instead, as Forché suggests, the experience of the poet exists and develops within his language, as in the excellent ‘The Liberation’ in which the darkness is examined as another layer that covers up another scene of war:

[…] The truth of this place

will always be the same. Remember this night

as if it were another day. Do not be afraid of it.

It will bear its name with the shallow moon

that gives you its eyes to watch the darkness

crumble away, as if there were another night.

I could conclude by saying that this is collection full of a kind of defiant hope, but Kingdom of Gravity is perhaps too complicated for such a statement. My only real criticism is length; the book is several poems too long. A more ruthless edit could have trimmed the instances where Makoha treads over the same ground, risking inertia. There are times when the strength of the images can become overwhelming, and the repeated development of images concerning the dark, a little repetitive. But there is plenty of variety – from dramatic lyrics to reportage – that enables his interrogation of the trauma of living in a state of war, of leaving one’s country and the emotional toll of this experience to affect the reader in many ways.

Given the recent successes of powerful debut collections about war, Diaspora and genocide from poets such as Mai Der Vang, Ocean Vuong and Layli Long Soldier, it’s no surprise to learn that Makoha’s work has already had recognition and success in the United States. At the time of writing, Makoha’s work is less well celebrated in the UK, but Kingdom of Gravity is shortlisted for the Forward Prize for Best First Collection, an award for which he is a serious, if not the contender. 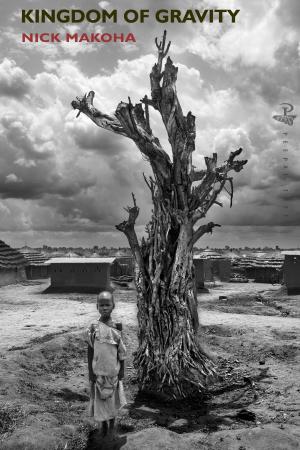 You can buy Kingdom of Gravity from the Peepal Tree Press website.