Sometimes you read a work that is so clearly deserving of the accolades it’s received that it restores your faith in things. Sasha Dugdale’s ‘Joy’ – the title-piece of this, her fourth collection from Carcanet – is such a work, having won the 2016 Forward Prize for Best Single Poem, and rightly so.

A playwright as well as a poet, Dugdale has harnessed the power of dramatic monologue to produce a tense, dizzying threnody that seems destined to become a one-woman show. Broader still is that much of ‘Joy’ looks like prose. What makes it poetry, however, is everything it doesn’t say and everywhere it doesn’t go, i.e. its ephemerality. This is not narrative, this is time boiling over; and on a purely technical level the effect of the poem’s large, unbroken blocks of text is to put the reader in the room with someone who’s breathlessly fixated on something. (The occasional stage direction, meanwhile, reminds us that this is happening right now.)

The speaker in Joy is Catherine, widow of William Blake, and her fixation is a process surely most people can relate to: trying to make sense of a relationship that has come to an end, though in a case like this it’s questionable whether the word ‘end’ can really apply. Like the poem itself, the Blakes’ marriage was evidently more than just that; according to this imagined Catherine, it was a true soul-mating, a creative partnership in which:

He wrote and drew and painted as if something else painted through him and I coloured and sometimes drew as if he was drawing through me, and humility was in both of us, because we were instruments and equal in our apprenticeship.

The internal contradictions here are hard to ignore. Indeed, contradictions characterise much of the piece, raising questions about the nature of a life-changing event: having lived as one half of a whole, for example, how can that half live without the other? Marooned in the material world, is it in fact Catherine who is lost, not William? ‘A nothing left in darkness yet I am an identity’, she hedges, reminding us that the great woman behind every great man is not merely a cliché. But Dugdale’s real subject is genius, not gender; the text’s feminist statements, while forthright – ‘There was a song and he sung it but I sung it better’ – can be concise and relatively apolitical.

The most glaring contradiction, meanwhile, is perhaps the poem’s title: why is a piece about grief called ‘Joy’? The mystery haunts the text, and while a line like ‘I have woken up from a dream of abundant colour and joy’ seems to clear things up, it’s more complex than that:

I wish and feel and weep and while I weep I delight.

So the agony is the ecstasy, as Lydia Lunch put it, and it’s an idea that permeates the collection. This comes as no surprise to me: I’ve always thought Dugdale’s poetic world is one ruled by a kind of demiurge, a corrupt, fallible god whose broken creation must learn to see the beautiful and the ugly as equals, or go mad. Contemplating ‘all the various hells upon the earth’, the poems that make up the rest of the collection repeatedly suggest that the diamond and the rough comprise a whole:

The hours and days mass themselves around

On railway embankments on a mid-February day.

And that is in truth what I never quite say:

Those trashed slopes are home to the foxglove

An ancient restorer of the heart’s beat, my love.

The motif returns vividly in ‘Mappa Mundi’, a standout poem of jagged, juxtaposed lines in which ‘the white violets grow / By some unraveling rolls of roof felt’. The image is a little silly, but heaven knows some gallows humour is the prerogative, if not the condition, of the stoic. Here also we see how Dugdale’s habit of using a line-break to imply a pause or stop (phantom enjambment, you might call it) will sometimes misfire beautifully, so that ‘the badger lurching across / A glow worm’ seems to represent a monstrous force of nature towering over a glimmering human soul. Wrapping up the poem, she asks:

An invented place of moving and belonging

A delicious hatred of the other place

A sorry love of this one

Light caught like a thing unwanted in a tree

That ‘other place’ can be read as the feared yet envied oblivion that no creature, not even the demiurge itself, can touch – hence its lot in the ‘invented place’ of the material world. ‘Cutting Apples’, meanwhile, imagines thoughts as foot-soldiers marching on this other place, known simply as ‘absence’. As much a fable as a poem, it revives Nietzsche’s infamous warning about gazing too long into an abyss – and ends with a sinister twist worthy of Poe – by describing the ironic fate of the thinker’s last, best thought:

[He] came to the home of absence

And found the door wide open

He fell in love with absence

And threatens now to return forever

He is betrothed and thinks of nothing else

‘Betrothed’, by the way, is derived from the Old English for ‘truth’ – something the world of things is eternally seeking…

Another place the poems in Joy visit is the world of memory, which in a way borders on oblivion, being both something and nothing. Indeed, one piece seems to suggest (emphasis on the seems) that remembering a place holds it in a kind of superposition between here and there, gripped by the image of one’s imagined self. And it’s not just what Dugdale says here, in all its recondition, but the way she says it that has to be admired; coming upon an abandoned house by a wild, overgrown meadow, the speaker basically tosses a metaphysical hand grenade into the middle of a nice walk:

Memory makes that devastation in our shape

A place of man that man forgoes

And leaves for memory to unmake

In wild creation that masks the hollow eye

And rotting hay and rusty rake

Nothing will ever die

That lives – though all its form be changed

So there we stopped a bit and lay

Again, Dugdale’s ambiguous line-breaks and absented punctuation conspire with big ideas and difficult language to produce something that is virtual anathema to fashionable contemporary poetry. At the same time, the poem is simply making an observation about an ordinary (if elusive) situation. Its terza rima form, meanwhile, could just as well represent the interlocking footsteps of the walkers as it could the churning mill of time.

The poems in Joy are not mere philosophical excursions, however. For those of you who look for storytelling and scene-setting in poetry, ‘The Canoe’ and ‘Days’ have much to offer, not to mention some laid-back diction (‘some of us laughed / Real excited’) and surprising humour (‘I can’t help wanting sex / So near to death – I mean / Geographically’). And, while it’s impossible to convey the range of the title piece here, rest assured its operatic cries are well-tempered by a Joycean attention to detail: 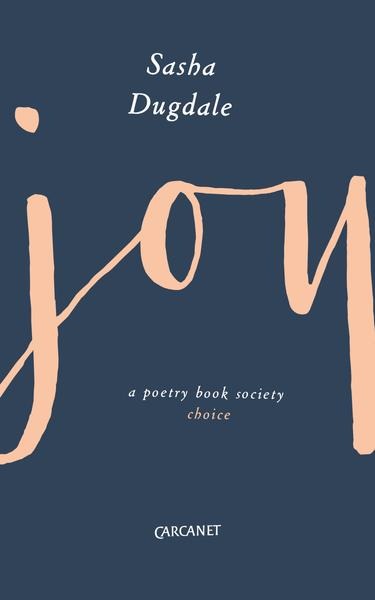 You can buy Joy by Sasha Dugdale from the Carcanet website.

Reviews are a new initiative from the Poetry School. We invite (and pay) emerging poetry reviewers to focus their critical skills on the small press, pamphlet and indie publications that excite us the most. If you’d like to review us or submit your publications for review, contact Will Barrett at – [email protected]