Home » Blog » Review: ‘All this is implied’ by Will Harris

Will Harris distrusts fixed perspectives. At the same time, his experiments on the boundaries of poetry and prose are underpinned by the sort of phrasing that converts lines into permanent memories. In this debut HappenStance pamphlet, he addresses the ambiguity of identity and inheritance.

For Harris, who has an English father and a Chinese Indonesian mother, it took “years of not-writing to realise I couldn’t write from an invisible, vantage-less perspective, but had to write out of my own confused, mimicking, mixed experience.”

In the third poem, ‘Self-portrait in front of a small mirror’, the act of making a self-portrait as a child is the gateway to a brief, biting autobiographical account how race shapes perception and self-perception:

I pay close attention to the shape of my eyes, how my eyelids slope down towards the ridge of my nose—that fold of skin, which I will learn is the epicanthic fold, no more an indicator of race than my stubby little fingers or the mole at the centre of my chest. Just different. I am making a self-portrait in front of a small mirror propped up on my pencil case. How can I know that when I put aside the mirror, as I must, to encounter the world with and through those eyes, there will be questions: where are you from? are you Korean? speak Chinese? At seventeen, at Borders, I will say my books are for an English degree and the man behind the counter will grin, call me a bright boy, and though it may be nothing—as he says it, I see myself reflected in the glossy wall display behind him—I will feel accused. When I open my mouth in shops, though my voice shrinks into a weird RP, I will accept the illusion of the colonial elite, other in blood and colour but English in taste. The illusion will remain intact long after I am presumed foreign, after a stranger tells me to fuck off back home, after a barman—standing in front of a row of spirits, endlessly mirrored—asks for my ID, refuses to accept my name as my own. Will Harris? My nasal bridge which, being lower-rooted, draws a fold of skin over the corners of my eyes, marks me out—as it does these words—for special treatment. But I must, and will, put aside the mirror.

Initially, the ‘close attention’ Harris pays to ‘the shape of my eyes, how my eyelids slope down towards the ridge of my nose’ is simply a child’s desire to create an accurate image. As the poem progresses, however, the prejudices of strangers complicate that image. Harris’s reflection returns, accused, questioned and insulted: ‘I see myself reflected in the glossy wall behind him’.

The poems here constantly enact the desire, and impossibility, of escaping ‘the self and its history’. In the end, his features become a physical brand, which ‘marks me out – as it does these words – for special treatment.’ The final sentence, coming as it does at the end of a tight block of prose, lifts the reader out of the poem, powered by its two modal verbs: ‘But I must, and will, put aside the mirror.’

Images of mirrors and doubles proliferate throughout the pamphlet, repeating like the ‘row of spirits, endlessly mirrored’. ‘Yellow’ tells the story of two almost-identical Chinese conjurors Soo and Foo. Foo travels to London to find his doppelganger. As in an Edward Thomas poem on a similar theme, ‘The Other’, Harris creates menace through narrative detail and a deceptively relaxed tone. As with Thomas’s, the poem ends with death, or its premonition:

Now think of Soo and Foo

at the same time but

separately: a blue sky as

reflected in a clear blue lake,

water above and water

blood running down his long

A nasal brogue (his own

but strange) rings through

It is ‘midwinter, mid- / depression, fog so thick / the rooftops looked like they / were under sea’. Londoners follow Foo around, ‘pulling at his hair’. But the most unsettling image is the mirror itself: ‘a blue sky as / reflected in a clear blue lake…’

There is something acutely unsettling about mirrors: the self disappears into them. In his Sonnets to Orpheus the German poet Rainer Maria Rilke describes the mirror as ‘a sieve full of gaping holes / filled with the gaps and intervals of time.’ There is, quite literally, nothing in them. Worse still, that ‘nothing’ is a perfect replica of oneself.

The false accuracy of the mirror is also a metaphor for the business of capturing reality through language – i.e. writing. ‘From the Other Side of Shooter’s Hill’, a hyper-realistic prose account of a conversation between the narrator and a friend, interrogates the perspective of the author through rapid shifts of time and subject. Harris also drops in theoretical reflections:

while always clearly being me.

In this case that ‘voice’ is prose, which can incorporate both description, and discussion of that description in quick succession while putting both perspectives on an equal footing.

Elsewhere, Harris contrasts the unbearable lightness of being with the weight of history and his own mixed inheritance. Inheritance here is something physical, akin to a natural phenomenon. ‘Mother’s Country’, an approach to Jakarta, introduces the theme:

The shutters open for landing,

towards the edge of a relieved

the wet banks of the Ciliwung

are slums I have forgotten,

sutured wound. As we begin

our descent into the black

smog of an emerging

power, I made out the tin

It is raining profusely.

After years of her urging

me to go, me holding back,

I have no more excuses.

Again, perspective is crucial: the entire piece takes place from the air. The author is returning to Indonesia, but the poem never gets there. The rhymes are heavy, featuring long vowel sounds – ‘juices / excuses’ – while the irregularity of the rhyme scheme creates a delay which mirrors the breaking plane. The river and the slums create a ‘loosely sutured wound’: history, identity and inequality as unhealed wounds. The fourth line from the end slows the pace down with a new sentence, further emphasising the oppressive weather.

In ‘From ‘The Ark’: II’, Harris associates inheritance with romantic ideas about nature, both powerful forces which control the individual while being beyond individual control; phrasing and the imagery come together in the authoritative, sweeping final stanza to create an awful, Larkinesque sense of inevitability:

Inheritance is not passed down, but grows

within us, feeds off weakness, blares

The triptych of ‘slowly filling, partial, slant’ echoes that of ‘grows / within us, feeds off weakness, blares / importance.’ The cadence falls like the rain. And not simply rain, but rain filling an ocean.

Phillip Larkin’s excuse for not taking part in the circus of readings, residences and workshops that most poets need to survive was that “it would embarrass me too much. I don’t want to go around pretending to be me.” I’d argue that the poems here share his instinctive distrust of the self, and self-perception. But they also add an important, necessary corrective: not everybody has the freedom to choose to simply ‘be me’. 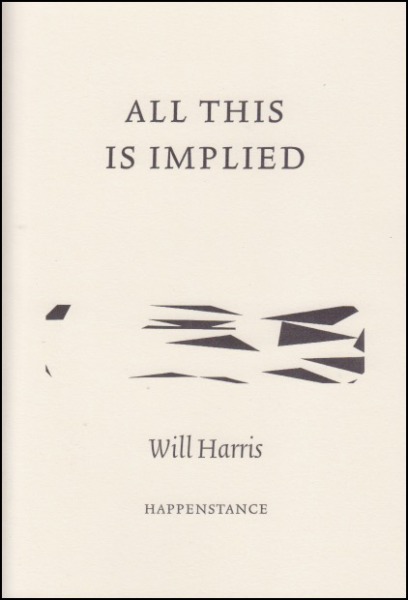 You can buy All this is implied from the HappenStance website.