Angela France’s The Hill is a book-length sequence of poems celebrating Leckhampton Hill near Cheltenham. In its commitment to explore every aspect of the area, from its history to its landscape to the people who meet there, the collection is an all-encompassing celebration of place, as well as a showcase for the versatility and range of the lyric poem.

One thing I really admire about this collection is its range of forms. There’s a great sequence of prose poems about people for whom Leckhampton Hill has been important. The impressive realism of these voices showcases the way that The Hill is a triumph of research as well as style. The cumulative effect of these monologues approaches something like the impact of Sherwood Anderson’s great story cycle Winesburg, Ohio: they capture the way place stores the people who meet in it.

Here is the opening of ‘Aged Witness 8: William Tilling’:

I looked after my father’s sheep when he rented land on the top. People used the paths daily, and were never stopped. Weekly marketing, men to work, schoolboys scuffing feet.

And here’s an extract from ‘Aged Witness 11: William Ballinger,’ which records a tense rural moment; there’s a real sense of these poems preserving an important oral history:

Squire Trye came by, astride his big hunter and straight away began to whip the foremost horse on father’s wagon to turn it, saying the Stoneway was private. Father jumped down and laid his whip on Trye at which the Squire galloped off.

If The Hill collects some memorable prose poems, it also shows off the author’s ability to manage the music of language and the way it can capture the natural world. Here is the entirety of ‘Trails and Ways V,’ a wonderful short lyric about a hare:

point a glamour on morning.

a veil past the way.

in the centre of my chest.

‘Fox’ takes a different approach to a similar subject, creating a distinctive voice for the animal in a way that might perhaps remind us of Hughes:

I wend where I will

fox is my namen

Another form which France handles with aplomb in this collection is terza rima. ‘Map Reading’ uses this form to elegantly structure a discussion of the problematic relationship between maps and place:

In the woods I am unsure; trees and scrub deny

the map. I don’t know whether I tread skew path

or bottom jenny, can’t see where the path edge lies

under hart’s tongue and tree-roots that clasp

In a world where many of us most often might reflect on the confusing relationship between maps and reality only when the sat nav starts doing something odd, France’s approach here is refreshing.  The poem explores the use of maps to control or own a natural world which is everyone’s birthright; ultimately it comes down on the side of those who know the place by their love for it and their lives in it rather than by lines on a map:

They’d hobnailed the way to villages over the top,

and knew which path late-to-school children would run;

they named the paths but saw no need to plot

on paper. They went where generations did, obeyed

the curves and lines of the hill. I should drop

the need to get it right, call where I tread the way.

As with each page of The Hill, there is so much to admire in this ending: that wonderful verb choice ‘hobnailed’ which conjures a walk and a life; the perfectly timed line break ‘plot/on paper’;  the brilliantly memorable phrasing of ‘They went where generations did;’ and that great last sentence.

If The Hill shows France to be just the master of forms and subjects which a book celebrating the rich life of a place needs, it left me with a couple of questions. The first was whether the variety on display actually goes far enough, or whether, in order to really capture the varied life of a place over such a sweep of time, there actually needs to be a wider and wilder range of sequences. Would elements of verse drama, some dialogues, and so on, further give us the sense of this place’s rich life?

Second, I have the sort of questions about The Hill that I have of concept albums: lovely as these poems are, would they always stand up as poems in their own right if shorn of their context and the strength they gather from their relationship to each other? Relatedly, I wondered whether a good prose introduction would enhance the reader’s experience of these poems. I know the tendency to explain, illuminate, introduce or make accessible is hardly modish in poetry, but a project this singular might benefit from a strong foreword. The poems are a result of France’s impressive original research into the area, and they can sometimes feel like the tip of an iceberg of knowledge, the beginnings of something we’d love to know more of. The depth of the poems and their background comes across far more richly in France’s wonderful live performances of this sequence, which incorporate a rich range of spoken voices and visuals to really give us the experience of the area, and one wonders if replicating those resources in some way would further enhance the reader’s experience of these poems. This book is a wonderful project; it explores all of the richness and all of the many-faceted nature of place, and France shows herself to be just the versatile and devoted poet who is needed to do the subject justice. 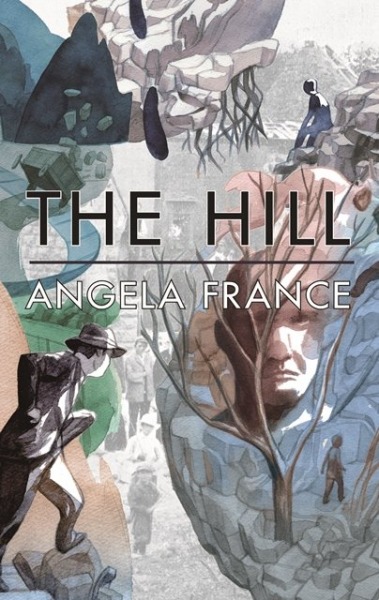 You can buy The Hill by Angela France from the Nine Arches website.