Home » Blog » Review: ‘Hello. Your Promise Has Been Extracted’ by Ahren Warner

Though you might not recognise it, history is here again.

They say the European project is coming apart, and I suppose time will tell. In the meantime, the least an artist can do is to try to bear witness. A wave is crashing over this century as it crashed over the last, and while there is much fear and anxiety to be found in that, there’s also something like the sublime. This third Ahren Warner collection – a cross-genre, mixed-media work of poetic polemic – isn’t exactly sublime but does at least attempt to ride the wave, and in the process stares some unpleasant truths in the face.

While it sounds like a line straight out of a postmodern, Black Mirror-style dystopia, the title is actually more than that. Indeed, it’s a kind of fulcrum on which Warner balances the political and the personal, the ‘promise’ of progress on the one hand and of fulfilment on the other. To be clear: this is not a postmodern work; it is concerned not with deconstructing but with what has already been deconstructed, what has been taken for granted. ‘Today you will not go to the House of Terror’, the opening prose-poem reassures us, before promptly giving way to some fairly terrifying material:

There is a point, I promise, where the sternum splinters to trip the hinge of your own vertebrae

on which your ribs will pivot open […]

Please, beat that putty mass of myocardium until it weeps, until its thick tears seep.

This is the only way to go on.

So on we go, pausing intermittently to be reminded that ‘the world’s a writhing slaughterhouse of blood and garbage, infectious stink, disease and ruin’. Needless to say, the speaker isn’t interested in being your friend, which might be a deal-breaker for people who come to art for empathy. I sympathise. But Warner is at least self-aware, and there’s comedy in that:

I won’t go into the politics of what is and isn’t prose-poetry (especially contentious post-Citizen) because we’d be here all week. Hello has a bit of both, and the block-text sections that pass the prose-poetry test do so because they are, crucially, non-discursive, as in ‘Mottle-skinned, predator, mane of the explorer, searcher, conqueror, lion monster, grim, golden, blond-locked, gnawed off, nibbled away: SELAH’. Indeed, the collection as a whole is healthily non-discursive, tempered by moments of pure image that are quite exquisite and almost worth the price of entry alone:

A digit or dactyl of snow, finger-tip

under the upper lip, needling until

Cut-glass light beyond the dacha,

Her leg, its stubble a small field

While it’s tempting to view Hello as a Brexitrump text with its talk of how ‘the lion says I Will‘ and how ‘You will have nothing in your pot // but a broomstick and a pay cut’, it’s perhaps best understood as an alternative to the West European/North American populist drama. Many of these poems are of places (e.g. Athens) where people don’t necessarily anticipate a social catastrophe; they live it. (And at least one piece provides a complement to anti-fascist hysteria by reminding the reader that communism hasn’t exactly gone well either.)

Hello is most certainly, however, a millennial text –  the diary of a post-twentysomething’s delayed gap-year-on-the-continent-gone-wrong. Pics or it didn’t happen, I hear you say, and pics there are. Having little technical knowledge of photography, I can comment only on how the images (interspersed on every other page) serve the text. Results are mixed: ‘Into that almost glade…’ opens with a richly descriptive forest scene, while the accompanying image shows…nothing of the sort. Part II of the collection, however, seems to grieve for a lost love (or lost self) against the backdrop of cultural decay; the literal backdrop, meanwhile, is a series of ruined pink walls whose cracks and holes evoke wounds or orifices. It just works.

This section is perhaps the heart of the book, a twenty-stanza declamation in which ‘Everything turns in the quiet leisure of disaster’ with the poet’s ‘allegorical / hand thrust into torture’. It’s surprising and gratifying to see an artist wilfully biting off more than he can chew, tearing into modernity while suggesting, quite unfashionably, that its mindlessness is linked to its godlessness:

This age [our age] demands an image of its

an old bitch gone in the teeth, the ultimate

Plenty of readers will find the tone and texture of such language intolerable, and fair enough, but it’s worth persevering for the relatively effortless passages:

to distance, when I lift her back

to me now: nothing there but that pale

a machine up and down, an ochre

He also makes the insightful suggestion that when we do admit of tradition, it’s in the form of edifices lining our borders:

O technosociety, where memory is tolerated,

on which to mount steeples of rust, lay

anything so long as there’s a margin

and little but commerce between us.

Crucially, Warner is able to marry the poetry to the horror, and the result is one of serious melancholy. Part II limps offstage in a style highly reminiscent, in both form and content, of Rimbaud and his drunken boat:

All abandoned, the last rig broken, the staggering

I wish that I could speak only

of it all, the voices of children singing.

A chapel, in spite of it all.

He does occasionally drop the ball – it’s unclear how something as rigid as ‘a sheet of mirrored glass’ can be ‘drape[d]’; ‘utterly complete’ is surely a pleonasm – and a mystifying line like ‘Soup. Soup. Soup. Rage’ seems to invite ridicule. One piece, which opens with the very relevant question of ‘When is terror not terror? When is terror / progress?’, employs some effective slant rhymes: the shifting vowel sounds of ‘snow’ and ‘thaws’, for example, not only please the ear but seem to enact the melting process. Frustratingly, however, the last two couplets abandon the technique for no discernible reason.

Perhaps frustration is the goal. When not dabbling in esoterica, the speaker is telling you matter-of-factly that ‘there’s nothing you can do – there’s nothing to be done’. It is up to the reader, I suppose, to decide whether and how much he is goading them, taking the piss. Is there really nothing to be done? One can at least pay attention ‘As, day by day, the IMF, the EU, jack up their demands’, and Warner does so, embedding himself ‘among the unwashed, the anarchists, the poets […] sampling something [I] hope amounts to authenticity’. Pay attention; don’t kid yourself.

Unsurprisingly, the collection closes without consolation. History doesn’t end, it rends, and ‘in some concrete grey monument to modernity and progress, someone else is dead’. But there is a little light at the end of the tunnel, falling impartially on an anonymous wall in the book’s final image. Having thrown some shade at such institutions as Buzzfeed and Twitter along the way, maybe the message is that it’s better to ignore certain media, and to see for yourself. You’d better hurry, though, because free movement is going out of fashion. 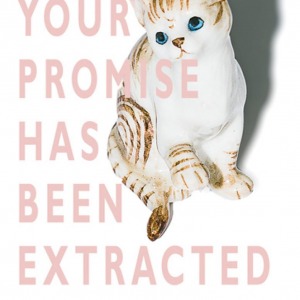 You can buy Hello. Your Promise Has Been Extracted by Ahren Warner from the Bloodaxe website.

Image: ‘Stripes on the lawn – Emmanuel‘ by Adam KR. This image has been cropped and a filter placed over it.