Centred on the Greater Pilgrimage to Mecca – from which At Hajj (Penned in the Margins) derives its title – this collection abounds with interrupted narratives or side-lined stories from seldom heard-of, or listened-to, people.

I’ve been busy thinking about the layout of a new collection as I read Amaan Hyder’s fascinating first collection that mingles voices, narratives, poetry and poetic prose. I mention this because I’ve felt so shoehorned into the idea that a collection must have a clear narrative arc and I’ve grown used to collections that use the lyrical ego ‘I’ persona, never once stopping to think about the voices of others. Hyder’s collection is a salutary reminder that this doesn’t have to be the case, although he often uses a first person speaker, he is at all times concerned about the lives of others.

As a poet Hyder occupies an interstice between the East and the West and as such his work reminds me of the later ‘divan’ or Sufi-inspired poems by Scottish poet Edwin Morgan. Morgan’s claim in writing his mysterious, polyphonous and fragmentary The New Divan was to protest against Western story-telling’s obsession with driving the reader in a hard, fast and rigid way. Hyder arguably answers this call to protest by speaking in multiple voices and telling a multitude of stories while located at the interstices himself.

Perhaps we’ve become too conditioned as readers and now expect poems to be easily understandable and tidily wrapped up with a resounding conclusion or punchline, but Hyder’s poems refuse to do that. Throughout these poems I was struck by their twin drives of concealment and disclosure, all written in a highly elliptical style that makes sometimes big imaginative leaps and isn’t necessarily concerned about the reader taking it all in in one sitting. At times I get the impression of an almost defensive withholding of the whole story, as pretending to understand everything in one go would be to feign a total knowledge of another person’s life and suffering, or to make that experience seem easily understandable in the first place. Take, for instance, the specific and personal violence and unease alluded to in ‘Hyderabad’:

The state tripped on its carpets last night,

has a black eye.

I can’t see over the dashboard.

My client until I am six is my jailbird

the capital distracts from the shiner.

That said, one of the most striking attributes of this collection is its sense of humanity and empathy. Hyder’s Hajj poems in particular are consistently concerned with the ‘other’ – be that the ‘Other’ of the Western gaze or simply the other person on a pilgrimage in need of help. Simple acts of kindness take on a much greater social and spiritual significance, such as the blind old man in distress who is desperate for the toilet but is forever being pushed out of the way by younger men:

When the old man’s turn is next, he puts his arms

out and stops every man who tries to make his way before the old man. In

front of them stand there, chests against his outstretched arm. He stands

there and watches until it is the turn of the old man. The old man can’t see

what he is doing but he doesn’t need the old man to know. He just needs to

clear the way for him.

Of course, charity is a pillar of Islam but moments such as these, of the power of kindness and selflessness, transcend all faiths. Hyder, however, is above making pat statements about the need for human kindness. The tone of many poems is ambiguous – neither over-ridingly optimistic nor fatalistic. Take for instance, ‘Grain’:

We will look back on our time

as ruined lives, and think doing

good work will bear some reward,

but it gives only false impression.

We will look back on our time,

I suggest, remembering lines of code.

Good work will bear some reward.

Hyder has an enviable knack for memorable phrases which show a mind approaching familiar topics and scenes in a deeply defamiliar way: ‘memory’s a whittler’ in ‘My father in his bed sounds like ice cracking’ or ‘Citizens of carbohydrate’ and ‘a cup handle / designed for if you don’t want / to put your hand in the fire’ from ‘Inheritable Landscape’.

Besides this, one of the most impressive aspects of this collection is Hyder’s treatment of tradition and of relationships between the generations. In ‘At Dinner’ the speaker reminds us that we are all locked in a cycle of rebellion and repetition – fated to reject the orthodoxy of our parents in favour of our grandparents and so on: ‘What is an orthodoxy with one generation, generally, is thrown off / by the next and so on. Now, really, it’s religion more than smoking’. This idea is also brought home in the closing poem which meditates upon street signs being burned and replaced by new ones: ‘the language of / our replacements / everywhere and hard to reach’.

One of the strongest poems is ‘Coats’ where there is a full generational role reversal and the speaker’s parents are rendered schoolchildren by circumstance:

My parents in a playground,

I take my father aside. He says, ‘My father says…’

I take my mother aside. She says, ‘My father says…’

Their drawings are pinned to a noticeboard.

They point out which houses are theirs.

I don’t recognise them.

These poems not only stress the individual in the midst of mass movement, but also that the importance of remembering the crowd itself is made of individual stories that are at risk of being lost in the ongoing upheaval, displacement and pilgrimage.

Hyder’s great central motif is that of movement, he begins by reminding us that the movements of prayer are similar to the movements of thought and that the poems proceed in this way. It’s worth mentioning that the abstract patterns of thought in Hyder’s poems could be an attempt to engage with Islam’s interest in abstract art, over depictive art. In ‘Mohammed’s Mobile’, for instance, we hear about the Prophet Mohammed through negation – what he isn’t more than what he is – ‘he wouldn’t have had any pictures on the / wallpaper because that would have been like eating pork’.

To return to the theme of movement, in one ‘Hajj’ poem we are told that ‘the history they know is the history of movement’ and this journey is so stressed in the collection as to take on a great, almost visionary profundity and resonance. By the time we reach the last half dozen poems of the collection, even seemingly simple things like a dessert in ‘At Dinner’ are composed from various layers influenced by both Asian and European cuisine. By deconstructing this dessert, the speaker seems to be saying something about layers of cultures, but nothing is ever clearly spelled out, so we are left to put our own interpretation on the poem:

That’s why, when it is used by chefs, it is always peeled away from

its wrapper with small tweezers, the kind of instrument used by

delicate pages, lifting up small grains of stones, placing them on a dish

and sliding them under the lens of a microscope.

Similarly in ‘Sleeves’ the simple act of a coat with long sleeves given to someone seems to have a greater resonance implied behind it: ‘I’ve tried folding them back but two things happen: one is that / the inside, the lining, shows; and two is that they never stay but they / slowly unfold’.

Although At Hajj is about the voices and experiences of many, covering major themes such as movement, religion, displacement, diaspora, it is also about unity and togetherness. The closing image of the final ‘Hajj’ poem show us a crowd of hajis moving in one formation around the Kaaba at Mecca. These are poems which will work on the reader long after they’ve read them, they are both troubling and uplifting in the sense that they offer us a message of empathy and solidarity that is more necessary than ever right now. 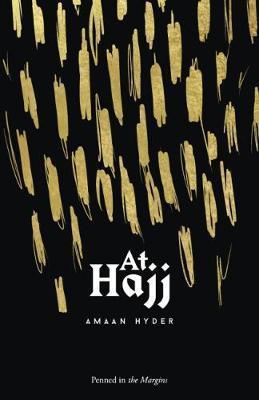 You can buy At Hajj from the Penned in the Margins website.