In September 2017, Richard Georges’ Make Us All Islands was shortlisted for the Forward Prize first collection. Georges was due to fly from his home in the British Virgin Islands (BVI) to the prize readings in London. Georges never made it.

Georges was unable to attend the Forward Prize readings due to the storms that had raged across the Caribbean (Irma in September, Maria in November); it was as if his portrayal of the island was being affirmed by the extreme elements themselves. You can see this from how the islands are positioned, ‘a scattering of rocks / (islands and cays)’ across the western shores of the Atlantic Ocean.

Georges’ second collection, Giant comes hot on the heels of his debut (a mere twelve months), which in poetry terms borders on the prolific; it seems the BVI is rich in its muse.  Giant is the productive overspill of Make Us All Islands because it covers many of the same themes. He sets out his stall with the title poem ‘Giant’, an opening sequence of five sonnets, preceded by an epigraph from Measure for Measure: ‘O, it is excellent / To have a giant’s strength, but it is tyrannous / To use it like a giant.’ This metaphor, this fight, has two subjects throughout the book: the weather and the impact of slavery and colonial rule.

Having lost their sight in the unlighted deep,

the gods of our fathers rose and strode

towards falling shards of sunlight.

The ocean splashed about their groaning limbs

And when they manage to land

the ancestors, gazing at the bright

leave, each colossus falling under

The second sonnet confirms the smallness of life with the symbol of birds, who have witnessed the ‘savagery’ of what has gone below:

A single flycatcher balanced on a wire,

beats some poor thing to dust

The sea, the wind, the rain all bring turbulence to these lives; it is only history that remains. The islands are the battlegrounds where people must be at peace with what the weather and climate serves up all year round.

As you can imagine from such a collection, it is rich with the imagery of nature. For example, there are references to birds throughout the book , ‘a ghazal of gulls’, ‘a pandemonium of parrots’ and subsequent support acts from doves, herons, pelicans, as well as goats, crickets, ad infinitum. Poetry as soothsayer unites with the birds and location, ‘I spend my days making birds out of poems / (each word a feather)’, and elsewhere ‘all streets are poems, / the buildings built from stanzas and urban / sonnets, and the people lost like vowels / upon my tongue’,

The ocean is also given a starring role, responsible for both the calm and the chaos in the stories it brings.

I feel the Atlantic

tugging from beyond the gusting channel

at the throbbing stigmata of slavery.

A series of poems titled ‘Redemption’ hold together the second section of the book, one of which is a powerful poem about Walter Rodney, the academic and activist who was killed in a car bomb. And within this poem, the question of existence and its fragility is raised:

What does a life look like when consumed by flame?

Inside, the bomb makes a fiery storm.

I wrote your name in the sand but the waves

So once again we have the influence of the ocean, washing away history. Death is a particular theme also, both in telling of the past and the present. The short poem ‘6am/McBean’ is a tragic tale of a father who, whilst caring for his two very young children, commits suicide by consuming the herbicide Gramoxone. It is a particular problem in southern Trinidad. Masculinity and the lack of jobs and worth felt by men, is also addressed in the poem, ‘The Boys’.

Our boys bleed in fresh streets, washed and painted,

The poem ‘Wardian Case’ is about the lasting effect of empire, how it remains in ceremonies and the expectation of respect by the local population to the old power. ‘This is a view for the colonial collection /….to let them know that we are still here. / And good. Behaved. Eager to strap ourselves / into the armours of a long-dead Empire.’

Like storms, these poems are unrelenting, but also like storms they are powerful.The final poem of the book is an ekphrasis of the anonymous 15th century painting (rather than the later Rubens or Caravaggio), ‘The Martyrdom of St. Ursula and the 11,000 Virgins’, where Georges marries their slaughter by the Huns, ‘the women have been torn apart. / Severed heads float in red rivulets/ on the ground beneath them,’ with the arrival of the Spanish at roughly the same time, and thus the birth of colonial rule, ‘What has always been / and remains a tale of savagery- / the bearded Spaniards, / faces and hearts darkened, / butchering souls / on the shore of St Croix.’ But there is salvation for both from above; for the nuns, ‘angels flock and bear their souls / to the threshold of heaven.’ And to the indigenous people of an island that would become the British Virgin Islands, ‘the flocking clouds bear their souls / back to the eternal horizon.’

The book concerned me with its emphasis on the power of the elements and the fragility felt by small islands such as the BVI, especially given the manmade warming of the seas but also seduced me with the beauty of its language, and the imagery it conjured from the many players: human, animals, gods. On an island with many giants, Georges’ collection is a great tribute and paean. 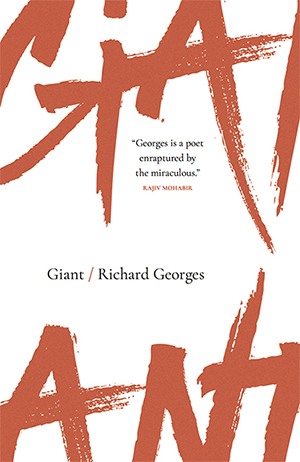 You can buy Giant by Richard Georges from the Platypus Press website.