Nia Davies first full collection is ‘salty-lipped,’ kinky and enigmatic. A fusion between the avant-garde and the more accessible lyric, it is a mix of contradictions: open and oblique, filthy and tender, skittish and measured, British and international, serious and, this is what surprised me most, silly.

All Fours glitters with knowing and surreal humour like the roving beam of a lighthouse on deep, dark water. The humour is perfectly timed, never over-done and foams over and between waves of intense subject matter, such as violence, alienation and miscommunication. It is the kind of slippery, spikey, linguistic humour that springs from misunderstanding a word, much like Woody Allen’s attempt in Take the Money and Run to rob a bank by sliding a threatening note to the teller who misreads the word ‘gun’ for ‘gub.’  Davies creates similar comedies of errors at home and abroad, giving a sense of cultures in dialogue and not always connecting:

And then they mentioned

dog (they mean god) and made great commotion

in the halls, did their hymns and rites.

I said oh dog no, he was never about this,

The insides of us three

Another section investigates psychotherapy with playful, Freudian references to ‘speaking to the celling’. Davies sends up the degradation of the language of analysis into soundbites and lightweight TV psychobabble:

it’s a challenge and the presenter says ‘don’t give up!’

Another section is based around listening: ‘Old, soft lobes, you really test me.’ To quietly listen one must be curious and this book shines with inquisitiveness about the world beyond the British Isles. Davies is a poet with an international outlook and a wealth of experience in poetic cultural exchanges, so it is not surprising that many poems explore the dialects, translations and thus connotations of foreign words in a quest to interrogate meaning.

We see this explicitly in a powerful sequence of poems which originally appeared in her pamphlet, Çe koslovakyalılaştıramadıklarımızdanmısınız or Long Word (published by Hafan/Boiled String). Davies titles each poem with the English translation of an epically long and unpronounceable foreign word. For example, ‘the most emotionally disturbing (or upsetting) thing, Pinakanakapagpapabagabag-damdamin, (Tagalog)’. This poem perfectly captures Davies skill at picking apart words to mine their meanings both literal and implied. The poem addresses violence against women both abroad and locally and our mixed reactions. The speaker in the poem has just finished reading the novel 2666 by Roberto Bolaño, which is ‘quite disturbing’ as it contains detailed accounts of ‘hundreds’ of unsolved and ongoing femicides in Mexico. Haunted by the book and considering who of her friends she ought to lend a copy, the speaker starts to question why she is reacting more emotionally to violence in faraway countries rather than to the women in the UK who die ‘pretty much every three or four days at the hand / of a man.’ This includes a girl she knew from school: ‘natalie, who was beaten to death by a / boyfriend / (he will be coming out of prison quite soon).’ The speaker is upset by this but comes to realise why she feels more disturbed by films and literature than the rapes, harassments and stalkings that occur locally:

i don’ tend to contemplate them reflectively like i do with

i am too upset at the time

if anything it was a positive therapeutic experience

because i could walk away which can’t really be said

for my classmate beaten into a coma and then dead from her injuries.

Use of ‘I’ in lyric poetry can be too introspective (‘I couldn’t think about ‘I’ anymore, it was bad for me’) and Davies explores the tropes of lyric and experimental poetry, addressing criticism of both. She also addresses the criticism of experimental poetry as being meaningless or deliberately obscured. She tackles this directly and with disarming self-deprecation: ‘Oh, help, my poem has no meaning / or backbone.’ Davies unites both styles, creating an almost physical delight in words-as-things. Drawing on other languages, mythological characters and even Self, she shows how words are to be taken apart, studied, played with, laughed at.

For me, it is the bright thread of humour that I admired most about this clever and humane collection. I loved the throwaway leaps of non-sequitur imagery that sparked from poem to poem. And I laughed out loud at the absurd, self-absorbed musings of ‘Mossy Coat’, imagined as a teenaged narcissist:

Personality-wise, I wanted to be a mismatched underwear set.

Certainly I was keen to become a burden.

I can’t help the way I feel, I said, especially when it comes to

spanking. And what would mother think of the way I’d become

in the coat she made me out of moss? That fine, magic moss?

Because of this, even if more ‘experimental’ poetry is not your cup of tea, I have a hunch you will stick with Davies’s luminous tangents, witty as they are weird. 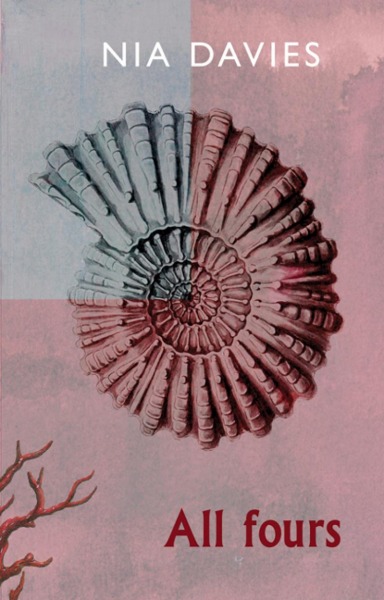 You can buy All Fours from the Bloodaxe website.