In Fossil (Peepal Tree Press) Maya Chowdhry brings beauty to eco-politics, taking us on a journey across the globe and beyond, experimenting with scale, time and voice to inquire into and imagine the condition of the non-human world.

I found that the emotional power of this collection of thirty free verse poems accumulated as I read (one sitting recommended) so that towards its final quarter I began to feel there was truly nothing more important than this – than in paying close and constant attention to the beauty and wonder of life in all its astonishing forms; nothing more important than urgently recognising and reversing our role in ecocide. Reading ‘Indian Bee Orchid’, for example, I even found myself blushing, implicated as I and all of us are, in nature’s destruction:

Once I lounged in lush forests,

tricked bees with my plump tongue,

scenting them to land,

kissing them with velvet lips,

For a million years bees

far from the gaze of botanists

savouring their specimen jars. They

dispatch a tiny spoon; it neither has a divided body

nor antennae.  It is not an insect.

They steal a hundred thousand of my seeds

with their fat warm fingers,

plunging them into sawdust,

pathogenic fungi attract and kill them,

injure them with aseptic ancestors,

desiccate them with razor dust.

In the voice of the ‘Butterfly Orchid’, Chowdhry arrests us with an almost diastolic-systolic sequence. Here the poet brilliantly conjures for the reader a delicate and distinct image of the living, growing orchid and its interdependence with its eco-sphere, an image made beautiful by its accuracy and tenderness – and then she takes it away, leaving imprinted both the image and the political imperative:

I remember a dream where I was dust floating in water saturated air.

I don’t remember waking up in bright sunshine.

so insects came to watch the circus.

I don’t remember how summer ended.

I remember my flower tips drying out to wizened hollow stumps and me shrinking inside,

storing energy in my roots, retracting to stillness. I remember the echo of a rain quail call

the dawn back from darkness.

I don’t remember when I became deaf.

A Manchester-based poet and artist, much of Chowdhry’s work is concerned with ‘illuminating anthropogenic climate change’; in  ‘connecting legacies of inequality to climate change’ and in this collection, she finds a variety of ways to indicate human culpability. Many poems address us from the point of view of the non-human, imagining pride, or vengeance, irony, or bitter incomprehension, for example, in ‘Albatross’:

empty I fly to where all the ideas convenience ever had

return to pink and red shards that tear and choke my chicks.

Or again, in ‘Spider Silk’:

I spy you in your glass lab measuring my strands,

oblivious to the tiny jaws of pavement ants,

who are sharpening your hypothesis.

I am volcanoing, a face in a cloud of steam,

My plume, ash and lava fragments, plummet through geologic time,

stretching and swelling seas howling inside my flank.

You are foil man approaching my blood-red flow

with your thermocouple probe.  I spit argon

laughing at my reflection in your proximity suit.

However, our culpability isn’t the only concern in these eco-poems: the collection also contributes to (and no doubt draws on) current academic and political efforts to radically re-imagine our relationship to the non-human, not only in relation to destruction or protection but also in terms of ‘being-with’, ‘thinking-with’ companion species, as in the formulations of Donna Haraway in Staying with the Trouble, or recognising the role of the vegetal in what we have presumed to be ‘intrinsically human’ as in Irigaray & Marder’s Through Vegetal Being. This is achieved in the detail of the evolution, habitats, breathing or fossilised presence of a huge range of natural phenomena, from stars to sandstone to microbes. The detail is infused with a compassionate inventiveness; take here, in ‘Voltinia Dramba’, the fossilised butterfly: ‘Unfolding and drying my compound eye mimics gazing, watching the seas rise again/birthing flowering.’

There is much linguistic richness and invention in this collection, but – as is perhaps inevitable in the effort to present scientific or anthropological material – several poems in the collection are comprised mainly of what one might call list-statements. This might not be a problem in itself, but these poems – ‘Sandstone’, ‘Relativity’, ‘Black Badger Carlin Peas’, which all appear in the first quarter of the book – are not only stark with information but they also have a uniform, staccato syntax:

held in water vapour measure up to eons of weather.

Blueprints of other lives, the oldest ice sequesters

I like to think of syntax as a poem’s breathing, evidence of the poet’s deep attitude to the material. Joan Didion says ‘The arrangement of the words matters, and the arrangement you want can be found in the picture in your mind.  The picture dictates the arrangement. […] Nota bene: It tells you. You don’t tell it.’ (‘Why I write’ in Janet Sternberg (1992), The Writer and her Work). So whilst the syntax of ‘Microbial Museum’ could be said to embody human, emotional distance, with this and a number of others, I wanted a more varied dynamic to carry me through the poem – as it does in ‘I Am My Home’, whose syntax is more varied, awkward, alive:

Sometimes I fall in love       descend

from the pinnacle, swim out of the open door.

I go dancing in this ball gown, gathered folds clinging to my hips

the blue of the Indian Ocean,

In Helen Moore’s collection of eco-poems, Ecozoa (2015), there is also passionate engagement with our own role in environmental destruction. Political and corporate indifference and corruption are illuminated. Here, the poet’s mission is to help bring into being a better, an ecozoic, future. In Fossil something just as determined, but altogether quieter, is going on: that is, the construction of an intricate lattice of connections or communications between modern science and our colonial history of insensitivity to wild nature, between the sun and trees and grass, between deep time and ideas about territory – all the time drawing our attention to the inconceivable complexity and delicacy of those multiple ecosystems. This is a collection to be read in one sitting, and then read again slowly.

You are an abundance of crimson wild roses on rocky outcrops,

two points on a map unjoined by mountain peaks, a disputed line of control

that makes fools of territory.

You kill one Indian and four Pakistani soldiers every four days

with your minus sixty-degree nights, and avalanche-smothering storms.

between two religions.  You have been numb since the Little Ice Age

despite the sun rising in your shadow.

You blink at the gathering cumulus

engulfing you with their icy kisses.

Your spring melt gushes into the Nubra River, huge swathes of you sheer

and tumble into the swelling waters.  You are melted and cut with chemicals, 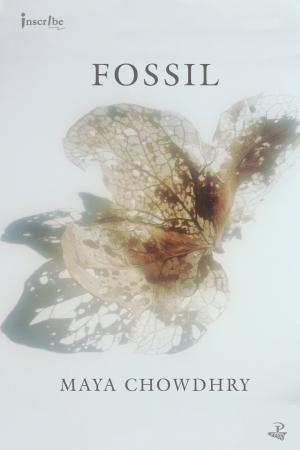 You can purchase Fossil from the Peepal Tree Press website.